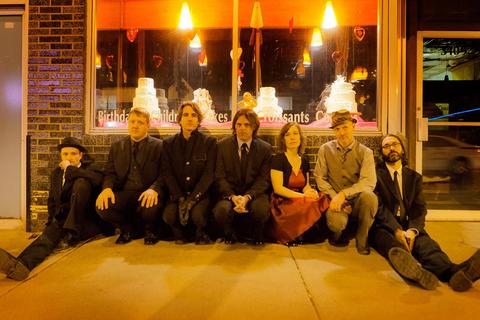 Scott Lucas is best known as the singer/guitarist for the two-man, Chicago rock band Local H. But recently, he has broadened his musical scope and greatly expanded his lineup, pulling together a collective of musicians -- the Married Men -- that currently numbers seven and includes violin, accordion and organ. The result is quite different than Local H and a perfect fit for Lucas’ more personal, introspective songs. Reviewers have compared the band to Wilco, the Waterboys and Nick Cave. Lucas calls the group’s evolving sound “country-ish, alt-rock for people who like metal.”

"The more we played live, the louder the amps got. The louder the amps got....you get the idea. After a certain point, we quit fighting it and decided to get chocolate all over our peanut butter,” Lucas explains, describing how he merged the force and volume of Local H with the sensitive twang of the Married Men for the band’s second album. “It's not like we've turned into Slayer or anything - we've just decided to embrace our dark side. And that goes for the lyrics, as well."

Blood Half Moon (the End Records - June 2012), is distinctively darker, yet ultimately more optimistic than Scott Lucas & the Married Men’s previous records, which were often described as quiet and sad. From the searing violin and haunting organ on the opening track “Lover the Lullaby,” which Lucas cites as the song that marked the band’s turn toward a more commanding sound; to “Heavy Lidded Love,” an upbeat song about cancer and ODing; to the closing, scorching eight-minute rendition of the traditional “There Ain’t No Grave (Gonna Hold My Body Down),” this album is HEAVY -- figuratively and sonically. Its songs touch on endings, disappointment, betrayal, confusion, love, uncertainty and death.

"Even on, what you might call, the prettier songs - we let that darkness creep into the lyrics,” Lucas says. “‘There You Are’ has these delicate three-part harmonies, singing about graves and maggots. It's like ‘Turn, Turn, Turn’ meets the Grim Reaper. For ‘Blood Half Moons’ - which is the closest I've ever gotten to a beautiful piece of music - I drove around in the desert for a couple of days and came back with lyrics full of blood, crows, and whiskey. And that dichotomy - the light of the music vs. the darkness of the lyrics - only serves to reinforce each other. It makes the songs seem MORE hopeful than if it was all flowers and babies. At least, to me."

As they did with their first two releases, the Married Men engaged Andy Gerber (Smoking Popes, the Tossers, the Effigies) to produce Blood Half Moon and recorded it in their native Chicago. But instead of working exclusively in Gerber’s Million Yen Studios, they laid down the bulk of the record at Steve Albini’s Electrical Audio, bringing in engineer Greg Norman (Neurosis, Pinebender, Russian Circles) to assist. And, to infuse just the right amount of heaviness, they turned to metal guru Sanford Parker (Yakuza, Pelican, Bloodiest) to mix it.

Scott Lucas formed the Married Men in early 2009 out of a desire to record a batch of intensely personal songs he had written that didn’t feel like they belonged on a Local H album. Shortly after culling his backing band from a host of local indie acts -- most notably the Tossers, Caviar and the Joy Poppers -- Lucas and the Married Men recorded their first album, with fewer than a dozen live shows to their name. Their debut, George Lassos the Moon, was released in February 2010 and was followed by several tours. To showcase the band’s evolution after more time spent together playing live, they hit the studio again that summer, releasing The Absolute Beginners EP in October 2010. Though he has no intention of abandoning Local H, Lucas has also never considered the Married Men a one-off, side project. He plans to keep them both going simultaneously.

The show at Hickory Street on Thursday, March 14

1:00AM Reverend and the Makers