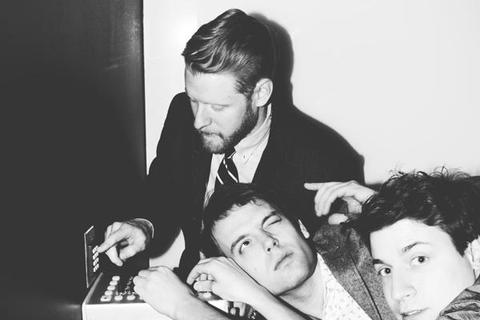 Listen to By Surprise

The music of Gemini Club relies heavily on science and technology, but it’s human chemistry that has sent the Chicago-based electronic trio into orbit. Ever since Dan Brunelle, Tom Gavin and Gordon Bramli got their heads together three years ago, they have synthesized songs that are equal parts rock ’n’ roll mettle, disco delirium and compositional genius. Beyond their songcraft, though, the trio has forged a bond with its footloose following in live performances that push the boundaries of dance music convention. Using specially designed gear — the band's own “Gemini Capsule” is in development — Gemini Club actually points its rigs toward the audience and plays its instruments rather than hides behind laptops and pre-programmed tracks. “We want to appeal to a rock crowd and to a DJ crowd,” Brunelle says. “It’s about expanding the palette of what a musical project can be, and not from behind a curtain like a lot of electronic performers. Eventually people are going to get sick of how detached they are from the audience. So we want electronic music to be something you can rock out to, to create a raw experience with a not-so raw instrument.” Says Bramli: “We love the fact that we are a pretty transparent band. Our mistakes are pretty apparent onstage, but so are our successes.” The rigs themselves are a gearhead’s dream — sequencers and synths with LED displays into which note patterns are programmed and then triggered. The trio is doing more than pressing “play”; it’s eliciting notes and chords as a guitarist would. And the band’s equipment not only allows for improvisation and on-the-fly remixing, but the process virtually guarantees no two Gemini Club shows are alike. “I love rock records and seeing bands play shows,” Brunelle says, “but the coolest thing I find about electronic music is designing your own system. Imagine if every rock band had to design and build their own guitars?” Gemini Club’s futuristic approach is a far cry from that day in college, when Gavin played Brunelle “a really primordial electronic track” that he had written in his dorm room. The following week, the pair met in a studio to flesh out the song. “There was a velvet picture of Elvis on the wall,” Gavin recalls. “I think that kind of created a spark.” After all, there is a traditionalist in Gavin, who once, while on tour, stopped at a Target, bought an acoustic guitar out of box and wrote a song on it. “I’ve always felt like I have a reservoir of ideas and melodies, and without Dan they would be all over,” he says. “Dan is like a sculptor, refining things for presentation.” If the muse struck in that situation nowadays, of course, that same song might be written on an app. “It’s been a matter of taking our traditional skills and applying them to electronic machinery where there can be a wider range of sounds,” says Gavin, who was a composition major in college. “For three years now, we’ve been pushing each other.” Bramli, whose background was in DJ culture, has been swept up in the slipstream. “This has pushed me too,” he says. “I’ve had to learn song structures, among other things. No way do I consider what I do onstage DJing.” While Gemini Club has made a splash supporting the likes of Chromeo, A-Trak, Two Door Cinema Club, Who-Made-Who, DJ Falcon and Chateau Marmont at live shows, the trio’s studio skills have made them the toast of the online world. The band’s first single, “Ghost,” inspired remixes from Hey Champ, Barretso, Golden Bug and Only Children, and its own remixes — of tracks by The Vanish, Hey Champ, Shinichi Osawa and, most recently, Chilly Gonzales —have been chart-toppers. Gemini Club’s next step to finish its full-length debut, planned for 2013 — and to unveil its “Gemini Capsule,” currently in the prototype stage and being developed in conjunction with Chicago-based gadget-maker Unatronics. The rig features the sophisticated innards you’d expect from a device whose name suggests the NASA space missions of the 1960s, but its aesthetic is distinctly Gemini Club. “It has wood siding — recycled wood from old Chicago buildings,” Brunelle says, noting the juxtaposition between old and new, organic and digital. “It’s really something that plays to both sides of us.” That duality, along with the trio’s predisposition for unleashing exuberant, dance-floor-friendly pop, has positioned Gemini Club as the next club heroes, guys who have the goods and can prove it, in plain sight. Says Bramli: “We have found this nice little niche. We want to be the American band that has its arms wide open to electronic culture.”

The show at Avenue on Congress Rooftop on Friday, March 15