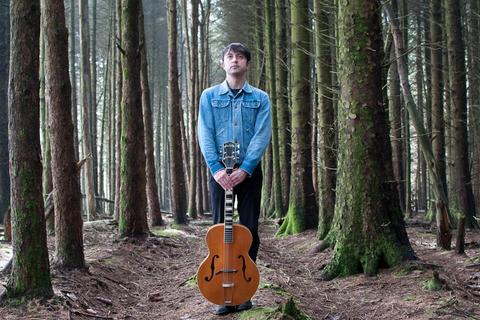 Christopher Rees is a solo artist, singer, song writer, multi instrumentalist, band leader, producer and record label director. He performs with a full band and in a solo capacity.

Christopher Rees released the much touted 'Kiss Me Kill Me' EP via FFvinyl in 2001, receiving a Welsh Music Award nomination for ‘Best Male Solo Act’ two years running in 2002 and 2003, and made history by becoming the first act in over a decade to support former Velvet Underground legend John Cale during a 2001 UK tour.

After embracing the spirit of empowered independence he establishing the Red Eye Music label in 2003 and released his debut album ‘The Sweetest Ache’ in October 2004. Building a seven piece band around him that included cello, violin, double bass, piano, guitars and drums, the album received widespread critical acclaim for its musical ambition and dramatic intensity.

“It’s not easy to achieve noise metal god status accompanied by a cello but Christopher Rees makes an awesome, bloody fist of it. Pumped up and snarling but managing to wrench beautiful tunes out of the wreckage… This is seriously amazing stuff”. NME

“Moody and magnificent”. TIME OUT

“Sonically powerful and epic in proportion. A record so cinematic it should be marketed as a Bond film. One of 2004’s most ambitious and accomplished debuts”. MAVERICK

In Oct 2004 he also made another piece of small history by becoming the first act ever to perform at The Houses Of Parliament, Port Cullis House as part of Fergal Sharkey’s Live Music Forum. The Sweetest Ache also earned him the title of Best Male Solo Artist at The Welsh Music Awards 2004.

His second album Alone On A Mountain Top (The Ty Bach Twt Sessions) was released in June 2005.

Recorded entirely alone over six days in a tiny 200 year old cottage on the top of a mountain in Mid Wales, Alone On A Mountain Top is the polar opposite to the orchestral polish and drama of The Sweetest Ache. Drawing from the rustic traditions of Americana, country, delta blues, gospel and rock'n'roll, it became an unexpected success in the UK with major support from MOJO, UNCUT and Janice Long on BBC Radio 2 as well as opening the doors to international touring. The album garnered international distribution throughout Canada, Benelux and New Zealand where Rees toured solo with such fine American acts as Willard Grant Conspiracy, William Elliott Whitmore, The Deadstring Brothers, Mark Eitzel, Kelly Joe Phelps, Freakwater and more.

“A compelling set of vocal theatrics and spectral blues communion”.UNCUT

“Raw, hypnotic and at times dangerous, Rees sings as if his life depends on it”. OTTAWA EXPRESS, CANADA

The third album by Christopher Rees ‘Cautionary Tales’ was released on September 3rd 2007. Described by MOJO Editor in Chief Phil Alexander as, “Full of simmering soul”, and “A genuinely roots affair…that deserves to be admired”, (Fred Dellar – MOJO)

It features collaborations with a host of world class female vocalists including a duet with much loved American singer Victoria Williams as well as other special guests like Becky Newman (The Hot Puppies) and French singer Charline Rose (Calexico, Giant Sand).

It also opened the door to some wider touring activities including high profile appearances at The Green Man Festival, End Of The Road Festival and supports slots with Richard Hawley and Texas Country legend Billy Joe Shaver.

Rees also showcased at international music festivals like North By North East in Toronto, Canada 2007 & 2008 as well as the World renowned South By South West Music Festival in Austin, Texas in 2008, 2009 and 2010.

Christopher Rees released his fourth album 'Devil's Bridge' on May 11th 2009 to great critical acclaim. He was invited to tour nation wide with such luminaries as Kristin Hersh (Throwing Muses), The Handsome Family, Chuck Prophet, Steve Earle, Cherryholmes and The Sadies.

“Christopher Rees has honed his narrative chops to fine effect. All splash echo and rockabilly riffs...he makes room for fat dollops of bluegrass, country and rustic folk, including a stomping banjo straight from the Blue Ridge Mountains”. UNCUT ****

“By far his best to date”. Q MAGAZINE

Clearly informed by Rees’ love of Americana, in all its diverse and dynamic glory Devil's Bridge embraces a range of styles from Rock’n’Roll to Bluegrass, Gospel, Blues, Country, Rockabilly and Appalachian Folk murder ballads.It’s all there, but as the 12 piece choral sections to songs like ‘All Our Beds Are Made’ and ‘World’s Fall Apart Everyday’ show, there remains something quintessentially Welsh about it. Titled Devil’s Bridge because the album was predominantly recorded in a mountain retreat near the village of the same name in Ceredigion, Mid Wales and because of its connotations to the subject matter, it sees Rees take another giant step forward on a journey that becomes ever more fascinating and rewarding with each new album.

“A spit and sawdust holler that's as close to a Southern hell-fire preacher as you can get hailing from Cardiff. Replete with machine gun snare fills and razor sharp guitar lines...rattles out of the traps like it was cut at Sun Studios in 1956. Very, very good”. MOJO (Live review from The Great Escape Festival)

“One helluva singer. A volumous force of nature. This is Rees at his peak, fully fried and giving it every ounce of grit and passion”. MAVERICK MAGAZINE

“His home is in the Welsh hills but his heart is definitely in Tennessee. He transcends the boundaries. A heart aching gem”. ARTROCKER MAGAZINE

Christopher Rees released his 5th album'Heart On Fire' in May 2011. The album is a well developed full band album, partly recorded in Austin, Texas with The South Austin Horns (Alejandro Escovedo, Burning Spear). With a bag full of songs that called out for an authentic American horn section Rees decamped to Austin for 3 weeks to arrange the horn parts with Mark Wilson before joining forces with veteran trombonist Charles Dickey and Trumpet player Ricky White. The parts clicked immediately and injected the songs with the dynamic punch and power that Rees had envisioned. Additional piano and Hammond organ parts provided the finishing touches upon Rees' return to Wales.

Written and produced entirely by Rees, Heart On Fire might sound like a change of direction for an artist recently seen plucking a banjo and stamping his feet on tour with Americana greats like Steve Earle,Kristin Hersh, The Sadies, The Handsome Family and Chuck Prophet.

But as MOJO Editor, Phil Alexander commented on the 2007 album Cautionary Tales, Rees' songs have always been, “Full of simmering soul”. And there's plenty of that trademark twang and tremolo here to support Rees' ever emotional and distinctive voice. While the scenery that surrounds these songs and the lyrical substance they contain is more immediately accessible and optimistic than people have come to expect from someone who's last album, Devil's Bridge mainly consisted of murder ballads, Heart On Fire is still unmistakably a Christopher Rees record. The rockabilly energy remains in songs like Warm By My Fire, while the title track and Raise The Battle Cry present uplifting gospel. Other highlights include the radio friendly Sparks Flying and the explosive In The Middle Of The Night.

Now with five critically acclaimed albums already under his belt, Welsh singer, song writer Christopher Rees has covered a lot of ground both musically and geographically in the last few years. Heart On Fire is another fascinating chapter in that journey. It's an album that celebrates Rees' passion and commitment towards music, love, life and his dedication to the art of serving the song.

“A soul-drenched album that smacks of the vintage Stax”. (Maverick)

“It's really good. There's a strong element of Memphis soul about it. I can picture Otis singing something like that”. (Ralph McLean – BBC Radio Ulster)

Christopher Rees has recently completed his 6th album 'Stand Fast' which will be released via Red Eye Music in the UK & throughout Europe in February 2013. As the title suggests it is a strong and defiant record full of fire and determined passion. It may once again confound expectations but reunites Rees with the raw energy of his banjo alongside bombastic drums and that trademark tremolo soaked electric guitar. Stand Fast may well be his most definitive album yet.