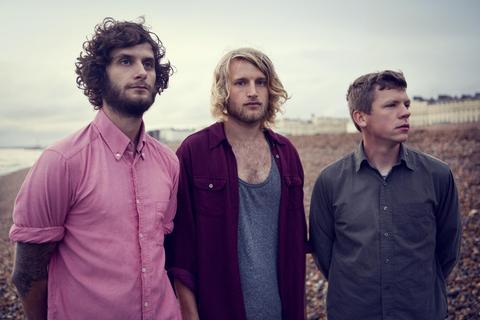 "The mathy skronk of Battles, Foals’ wounded hearts and The xx’s sense of space, all tempered by a freeness of mind that only comes from breathing a dose of sea air each morning" NME

“The best live act I’ve seen this year...I think they will be huge.”
Jason Carter - Head of Live Music at BBC Radio

Tall Ships have just released their debut album 'Everything Touching' in the UK to a very warm reception from press and radio, receiving a playlist feature on BBC Radio 1 for latest single 'Gallop', which marks a progression for the band’s sound, adding almost Morrisey-esque vocals to a typically catchy, building soundtrack forged together by loop pedals and a pounding drum beat.

Their UK tour included a sold out show at XOYO, before heading across to Europe in support of Nada Surf. Earlier in 2012, they toured with the likes of Dry The River, Los Campesinos! and We Are Scientists across the UK.

Originally from Falmouth UK, but now living in Brighton, Tall Ships have been attracting attention with their complex, layered and beautiful soundscapes and intelligent songwriting to create music that still manages to have mass appeal, citing the likes of Battles, Sigur Rós and Biffy Clyro as musical influences.