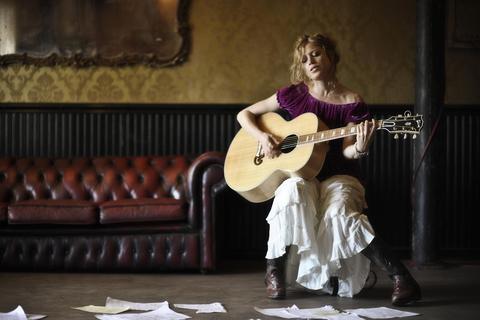 Listen to Behind a Veil

For over a decade, Jess Klein’s gutsy “tell it like it is” folk rock has been embraced by tastemakers from Tokyo to London, from Australia to her new home state of Texas.

Graced with one of the most enviable voices in popular music – equally at ease with a sultry whisper or a rock’n’roll wail, Klein has released eight critically acclaimed albums and toured the globe, sharing the stage with such greats as Arlo Guthrie, Steve Earle, Jimmy Dale Gilmore, Shawn Colvin, Alejandro Escovedo and John Fullbright.

MOJO Magazine writes “Jess Klein has one of those voices you want to crawl up close to the speakers to listen to.” And No Depression‘s Lee Zimmerman calls Klein’s latest release Behind A Veil “An excellent album – a career-maker in fact.”

Klein has grown into her Texas surroundings easily. No stranger to culture shock, the Rochester, New York native first picked up the guitar and started writing songs while living as a student in Kingston, Jamaica in her late teens. After returning to the states, Klein moved to Boston and began performing locally, releasing her first album, Wishes Well Disguised independently. After winning the Telluride Troubadour Songwriting Contest, and garnering several Boston Music Award nominations, she was spotted and signed to Rykodisc. Her first release for the label, Draw Them Near, (3.5 stars, USA Today), launched Klein on a worldwide tour that saw her wow 70,000 attendees at Japan’s Fuji Rock Festival. Soon after, Klein joined the songwriter collective Voices on the Verge, along with Erin McKeown, Rose Polenzani, and Beth Amsel. The foursome was featured on Good Morning America performing Klein’s song “Little White Dove” and brought sold out crowds in small theaters across the U.S. to their feet nightly with their blend of harmonies and eclectic styles.

After a move to NYC, Klein recorded her second solo effort for Ryko, Strawberry Lover (2005), which debuted as the No. 1 most added album at triple A radio a week before its release and garnered four stars from MOJO, as well as having the title track named one of the “Top Ten Sexiest Songs of the Moment” by the NY Daily News. Draw Them Near, Strawberry Lover and 2006’s City Garden would capture the attention of critics and fans worldwide.

Behind a Veil (2012) marks Klein’s second album with Austin based producer Mark Addison, the first being 2009’s critically acclaimed Bound to Love. In Bound to Love, Klein keenly embraced the dusty roots of Texas songwriters while reveling in her new surroundings. Behind a Veil goes deeper, chronicling her feelings during a particularly hard year; the loss of her father after a 5 year battle with ALS, a split with a long-time lover, and the self-empowering decision to move forward with no record label.

Jess explains: “You never really know what the big picture is to a situation – sometimes the meaning is veiled. It can seem really bad, but then later you can look back at the same moment and feel so grateful it went that way; I love that about life. Sometimes things are just really hard and really painful, but also beautiful.”

On Behind a Veil, Jess writes honestly and courageously about the conflicting emotions of love, loss, joy and pain. But even in the most delicate passages you can hear the triumph in her voice.