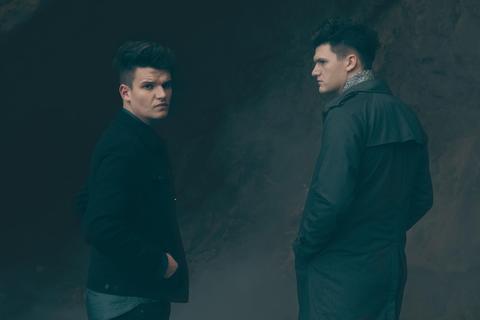 There's nothing typical about Pacific Air. Even while growing up in Southern California, brothers Ryan and Taylor Lawhon didn't learn about music via the usual staples, but rather through their mother’s unconventional taste in music.

"For most people, classic rock is nostalgic since that's what their parents listened to," exclaims Ryan. "For us, it's Enya, Deep Forrest, Laurie Andersen, and Ray Lynch because that's what our mom played in the house. New Age was our primary music knowledge as kids, and it definitely left an imprint."

Yet, the brothers were influenced by more than just their New Age musical roots. Despite the fact that they are decedents of a rural Alaskan family, Ryan and Taylor were born and grew up in Southern California and have never experienced a winter. The wintertime vibe must be in their blood, however, as their music at times possesses moody and ambient elements while still managing to maintain the warmth of their environment. The two nearly identical brothers drew inspiration from their virtually nomadic lifestyle, moving annually from one town to the next around the West Coast, and finding permanence in their collaborative capabilities. By the age of 15, they were in bands together, and not much has changed since in terms of their process.

"It's a lot like any sibling bond," Ryan comments. "We don't always agree, but we're surprisingly in tune with what we want to do. Taylor writes many of the rhythms and underlying chord progressions, and I'll write many of the melodies and lyrics as well as filling in on the production side. We're a great team."

In March 2012, they uploaded three original songs to a Bandcamp page under their initial moniker KO KO, the name of a boat they considered buying in the Newport Harbor. They had tracked the music on a laptop in the bedroom of their home, utilizing everything from guitars and bass to keyboards, synths, and organ. The setup wasn't fancy or extravagant, but it captured their spirit organically.

Within merely 24 hours of uploading the tracks, a Vice blog contacted the musicians. After two days, their music hit number one on The Hype Machine. A flurry of acclaim began to mount with features by tastemakers including MTV Hive, Disco Naivete, My Old Kentucky Blog, Neon Gold, and many more. The next week, Ryan and Taylor found themselves in New York for the first time to showcase for major labels. Embracing the drastic shift in weather had an incredible payoff for the duo, as their trip culminated with securing a deal with Republic Records.

Sonically influenced by their environment, but emotionally and lyrically exploring profound themes of death and self-exploration, the brothers found a style that is uniquely their own. In many ways, the first single "Float" provides an apropos introduction to Pacific Air's shimmering dream pop. Sun-soaked melodies cascade with bright beats, finger snaps, faint guitar, and laidback whistling as Ryan asks, "If we both get old, will you let me float away?"

The singer reveals, "I was literally floating between different things, and there was a real uncertainty about the future. The lyrics were born out of depression from that, but the music has a summer vibe. It's an interesting juxtaposition. I feel like the song is a youthful perspective on transition."

However, that's only one facet of their forthcoming debut four-song EP for Universal Republic produced by Chris Zane [Passion Pit, Mumford & Sons, The Walkmen]. A majestic organ swells through "So Strange" as synths careen in tandem alongside Ryan's elegant hook.

About the track, he goes on, "It's one of my favorite songs lyrically. 'So Strange' is almost like a sequel to 'Float'. The song talks about what happens after you've decided where you're going in life and your direction. It examines the insecurities implicit in that."

To some degree, Pacific Air's identity remains encapsulated in their name itself. Ryan exclaims, "It's a good description of our music and who we are. We've always lived somewhere near an ocean. It's where we've been most of our lives, and it's fairly representative of most of our songs, but I don't know if I would consider it surfing music. "