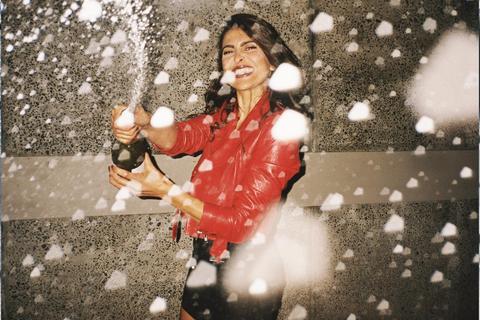 Since blazing a trail from Sydney to LA in 2012, Anna Lunoe has found herself in the eye of an American dance music storm. In under a year on US soil she has performed raging shows across the country, dominated the airwaves and the charts, and opened for the industries biggest names, leaving ecstatic and exhausted crowds in every city along the way…

But where did she come from exactly, and why didn't you know about her before now?…

You know those crowd shots from the huge festivals in Australia that you keep seeing artists post on the internet? Well, Anna was most likely the local DJ who played right before. Anna Lunoe cut her teeth Down Under, she is a proven performer and crowd favourite. She is the first woman to curate cd's for Ministry of Sound, has spun at soirees and created fashion show music for Chanel, Fendi, Prada, and Louis Vuitton (all while looking just as graceful as the models on the catwalk) and of course played every club worth its salt that Australia has to offer.

It really started with Anna growing up the youngest sister in a house full of boys, competing to see who could blast their music the loudest. To hold her own she educated herself on the music they assumed she wasn’t cool enough to like. After school she would dig through the bargain bin at the local CD store till sundown. The result was a little kid with an unlikely knowledge of 90s hip-hop, movie soundtracks and early experimental electronic music. She figured out how to work a tape recorder and began to record her own personal radio shows, giving commentary on her favorite songs on mix tapes to send to her penpals.

Naturally, years later she would begin her career in music as a radio host – for a slightly larger audience – with her own weekly dance music show on Sydney’s fBi radio.

She entered the DJ world playing indie dance and rap but over time she evolved, picking up the tempos and cycling through genres. The result is her ability to perform uniquely tasteful dance music in a variety of genres, but always with an unmistakable edge and depth of understanding. Early on, she instantly grabbed the attention of audiences and artists alike, throwing down next to main acts like Diplo, Daft Punk, Calvin Harris, Switch & Soulwax. On a production tip, her dj bootlegs gained viral popularity and turned up in the mix tapes of the big names. These things, along with always being one step ahead on emerging genres on her weekly radio show on fBi, resulted her being named as one of Sydney’s 100 Most Influential People and a “One to Watch” in Harper’s Bazaar.

As a producer, Anna is equally as unique and uncategorical as she is as a DJ. By lending her distinct and delicate vocals to tracks and blending her tropical house, garage, swing, indie pop, and bass influences, she adds an edge, understanding and feminity to club music. The tempos of the songs may very but the sound stays signature.

Productions starting to come out in 2011 with a disco-inspired collaboration with Wax Motif called ‘Love Ting’, it was a club hit and championed everywhere from Triple J to BBC Radio 1. In 2012, her releases with Fools Gold, Future Classic, Fjordin & Yes Yes Records hit another level. The dreamlike film clip to her collaboration with Flume clocked up half a million views and introduced her as a vocalist, and her 90's house influenced collaboration with Touch Sensitive called ‘Real Talk’ hit #1 on the Beatport Indie Club chart. It held the spot for an unprecedented three months, positioning at #4 on the chart overall for 2012, introducing her as an innovative production force in the house world.

The stage is set for Anna to breakthrough in 2013 as one of the hottest new DJ’s on US soil.

Presented by: Powered by Yahoo!

The show at Brazos Hall on Friday, March 15