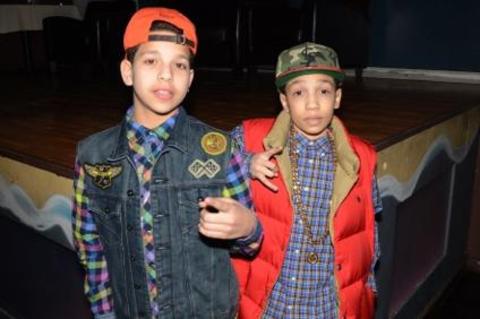 Lil monstaz consist of Noah Ashton & Xavier aka X-Eazy from Hoboken NJ started rapping at the ages of 11 and 12. Both of the lil monstaz was raised since birth together do to the partner ship of thier fathers who are in the music industry . Lil Monstaz have been in studios since they were babies, they have naturally built thier talent simply from being around it all thier lives. Lil monstaz are a big influence in thier community , they are involved in many charity events including turkey drives, toys for tots, feeding the homeless and other functions that go on in the community they have performed or assisted in helping in some way. LIl monstaz are honor roll students and they continue to keep their grades up even tho they have many hours in the studio weekly . Lil monstaz released a mixtape in 2011 called invasion on datpiff.com . The release of the mixtape sparked up a few videos that have been featured on the #1 urban hip hop website Worldstar hip hop and they have generated over 300,000 views . Lil monstaz have been co signed by the likes of joel ortiz ,norega, tone trump, akon, they even appeared in an acting scene on N.O.R.E featuring Styles p and Raekwon video "Google That" video which did over 3 million views. Lil monstaz future looks bright they write their own lyrics pick their own beats and have a great stage presence they have performed in New york and New jersey events and look foward to take their talents across the world. LIl monstaz will be releasing their follow up Mixtape titled "Beats & S.C.H.O.O.L the school is an acronym for Seven crazy hours of our lives, Noah ashton says the craziest things happen during school and hes most creative during school hours so thats what their lives are about. LIl Monstaz will be releasing an album later 2013 on itunes with production by The BeatNuts , Cito on the beat, Go illa production and some soon to be announced.