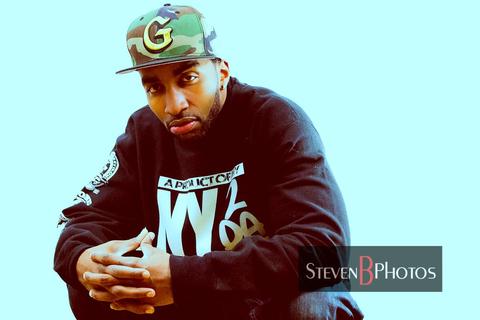 Mysonne, a Bronx native has a ridiculous amount of drive, talent and an undying love of hip hop. Although he has faced his share of heartache and pain, hip hop has always been there to see him through his darkest moments; and with an impressive resume of mix tapes and videos this experienced MC is out to prove that he’s making an indelible mark in rap’s history.
Born in the late 70’s he had to grow up quickly when he lost his Father at the age of 11. He and his siblings bonded over their loss, and with the unwavering love and support of his Mother and late grandparents the family managed to get through some challenging times. Even though he was showered with love and he found solace within the walls of his home, outside he had to navigate a treacherous, poverty stricken world of drugs, violence and gangs. Mysonne kept himself out of trouble with sports and education. He competed in the famous Rucker Park Basketball leagues with NBA greats, Allen Iverson, Stephon Marbury and Rafer “Skip To My Lou” Alston. The same way that he made a name for himself on the courts he was putting in work in the hip hop community. Mysonne was learning the rap game battling artists like Shyne and DMX and taking over the mix tape circuit. In the late 90’s it seemed like Mysonne was on top of the world. He was appearing on magazine covers, killing the mix tape game, his son was born and he scored a major deal with the iconic record label, Def Jam. However, things quickly took a turn for the worse, his debut album was never released and he was convicted on two counts of armed robbery. To this day Mysonne maintains his innocence but unfortunately he still had to serve years in prison.
As soon as he was released in 2006, Mysonne rededicated his life to his career. He has been working diligently reestablishing himself in the trenches, constantly releasing new videos and rocking stages. He is known for the brutal honesty in his lyrics over ridiculous, heart pounding beats. His astonishing first person accounts of street life always push the envelope of rap music. He has appeared on numerous radio shows including most of the shows on Sirius radio. He has also been a guest on the shows of Wendy Williams, Ed Lover and Funkmaster Flex. Even though record labels have thrown contracts at him left and right, Mysonne has decided to remain independent to deliver exactly the type of music that his fans want. He went on tour with Game and Black Wall Street on the R.E.D. Album Tour and he is preparing to go overseas internationally. Mysonne is ready to prove to the world that the “General of New York” is here to stay.