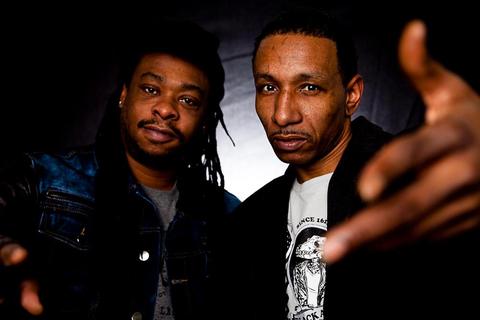 The genesis of the evitaN project is rooted in the traditional spirit of Native Tongues; the movement, the message and the music. Andres "Dres" Titus of Black Sheep, and Jarobi White of A Tribe Called Quest, have joined together to form the group evitaN, a name that pays homage to its inspiration as it is the word "native" spelled backwards. Both Dres and Jarobi were instrumental members of the Native Tongue movement while within their respective groups. The marked difference between the artists being that Dres has a body of work to reference, whereas prior to the evitaN releases, no one had yet to hear Jarobi rhyme. In Jarobi's 20 year affiliation with the iconic group A Tribe Called Quest, he had not appeared on any released music, instead opting to lend his positive energy and creative input to the group in other ways.

Based on their longstanding relationship, Dres was always interested to unleash the MC within Jarobi, and recently invited him to the studio to collaborate on a new project. The result was spectacular, and fireworks exploded in the booth as Dres jumped on the first track with Jarobi, and the duo created an instant classic called "Keep, Keeping On", and now, 25 tracks later, the rest is and will be Hip Hop history. Releasing their first project on September 21, 2012, titled "Speed of Life", the dynamic album includes collaborations with R&B sensation Yummy Bingham, heavy hitter female MC Rah Digga, and the infamous himself, Havoc of Mobb Deep. Described as a "salad" amidst the "fast food of today's hip hop" by notorious hip hop blogger Big Ghostfase, evitaN's debut release is already providing a breath of fresh air for those starved for the return of real Hip Hop.

Represented by Dres's independent label Pool of Genius, evitaN represents the true essence of hip hop music. Hip hop in its purest form, with lyrics that paint motion pictures in the mind of the listener, and beats that hit you in your chest and heart simultaneously. The group pens their own lyrics, and takes great pride in cultivating creative thoughtful music for their fans. "I hope our music always reflects hope and knowledge, fun and faith, love and pain, imagination and honesty," explains Dres. "I hope our music affects listeners as music has affected me in my lifetime...it's been instrumental in my well being." evitaN is ready to make their mark on the world, and now it's time for the world to get ready to listen.

Dres
Lyricist, artist, MC, there are so many words that can be used to define the creative force that is known as Andres "Dres" Titus. A talented hip hop artist, Dres is known to many as one half of the iconic Hip hop group Black Sheep, a group that created one of the most notable songs of the hip hop genre, "The Choice is Yours" a song that has shaped the mold of the culture in more ways than one. The track also recently lent its recognizable sound to Kia Motors, being featured in a popular commercial for the auto company which resulted in a remarkable 24% sales increase for the brand.
Dres's story is an inspiring one, although it was a journey that was not always quite easy. Born to a teenage mother, Dres moved frequently, resulting in his leaving his birthplace of Astoria, Queens as a young man. Not many people can gracefully rebound from the culture shock of relocating as a teen from the hip streets of Queens, NY to the grassy fields of Fayetteville, NC; but Dres did, all while making it look pretty much effortless. He managed to adapt to his surroundings using the same skills he has lived his whole life with, style, candor, and creativity. Dres was always an artistic young man, who has been drawn to the power of words from a young age, "I gravitated to Stevie Wonder's music at around age 10," recalls Dres, "This was my introduction to the power of words." Intrigued by the power of learning, Dres excelled academically and participated in several extra curricular activities that contributed to his understanding of music, including playing the trumpet and singing in his high school's choir.
During his high school years in North Carolina, Dres linked up with another New York native William "Mista Lawnge" McLean, to form the group Black Sheep. The group found much success and went on to become the first hip hop group to perform on the Tonight Show with Jay Leno, collaborated with top acts like Vanessa Williams, and in 2008 had their signature song "The Choice is Yours" ranked on VH1's 100 Greatest Hip Hop Songs. Black Sheep was also an integral part of The Native Tongues, a group of artists and talent that shared similar views and a dynamic love of music. The Native Tongues included hip hop icons like A Tribe Called Quest, De La Soul, and Queen Latifah.
During later years Black Sheep disbanded, and Dres went on to continue to make his mark in the music industry. Dres describes his style as limitless within the genre, and he strives to always push himself to achieve new heights of creativity and meaning when he writes his rhymes, "I think I have an exceptional ear for knowing what compliments me as an artist," Dres says of his talent. His latest project exemplifies that creative intuition, and has brought him to collaborate with Jarobi of A Tribe Called Quest, in a new group called evitaN. evitaN looks to reenergize the current state of hip hop, bringing the culture back to a level of authenticity. "Through our music I hope to show the world that belief in yourself is paramount," says Dres, "and that caring for yourself, family, and people never goes out of style." evitaN is ready to change the face of Hip Hop music--- the world is waiting.

Jarobi
A Bronx, NY native raised in Queens, NY, Jarobi White was the often silent but highly influential force inside of one of the greatest groups in Hip Hop, A Tribe Called Quest. Having been an instrumen- tal part of the group for over 20 years, despite being a talented MC, Jarobi lent only his infectious positive energy and muse-like quality to the group, and was never actually featured on a song for his own personal reasons.
Being raised in a loving, caring environment where his talent and knowledge were nurtured, Jarobi was able to pursue his interests as he saw fit, and was drawn to rhyming during his early days. During his early years, Jarobi befriended the other members of A Tribe Called Quest, and the group went on to make a unique mark within the genre of Hip Hop music, selling millions of records and bringing a level of conscious creativity to the genre with classic songs like "Electric Relaxation" and "Can I Kick It?" Now the time has come for Jarobi to break his silence as an artist, and show the world how talented he is. A professionally trained and critically acclaimed chef, Jarobi has multiple talents and experiences that he plans to call upon to motivate him as he steps into the shoes of being an MC.
During his years with A Tribe Called Quest, Jarobi was a part of the Native Tongues, which was a collective group of creative artists and MCs who banded together to create their own following and support system. Other famous Native Tongues members included Queen Latifah, Black Sheep, and De La Soul. Now those lasting relationships are allowing him to make his way back into the music industry.
Jarobi has recently teamed up with Dres of Black Sheep, to create their own group, evitaN, a hip hop group that looks to return creativity and originality to Hip Hop. " I'm ready to bring the fun back to Hip Hop," says Jarobi, "The good feelings." With evitaN, Dres and Jarobi are poised to inject a new level of energy into Hip Hop, and their fans are ready and waiting.