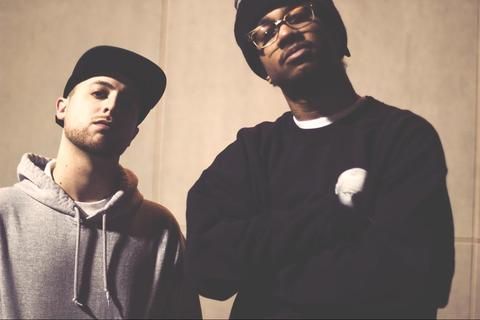 Over the past few years , The Doppelgangaz have gone from obscurity (Orange County, New York) to taking their unique sound all over the world. They have managed to do so while still having time to write, produce, dumpster dive and visit ungodly amounts of brothels.

Friends since childhood, Matter Ov Fact and EP discovered they were the last two descendants of the Rap Lords and were bestowed the gift (or curse) of taking their incomparable and gritty production style to new heights. Since succumbing to the Rap Lords’ request, The Doppelgangaz have provided numerous examples of why they were beckoned in the first place. Their Godly influence can be heard on notable projects like The Ghastly Duo EP (2008), 2012: The New Beginning (2009) and Lone Sharks (2011). The Doppelgangaz have also given fans of their production a few instrumental-heavy projects including the ongoing Beats For Brothels series. As a result of releasing quality works through their Groggy Pack imprint, the duo headlined a European tour in 2012, earned the number one spot on HHV.de’s Top 100 list and surpassed a million views on their YouTube channel. On U.S. soil, they performed alongside major acts such as Slaughterhouse, Action Bronson and Nipsey Hussle while gracing the pages of The Source, XXL and other notable publications.

In March 2013, The Doppelgangaz will be releasing their highly anticipated, third studio album entitled HARK. Delving deeper into the intricacies of the black cloak lifestyle, HARK cements itself as the group’s most personal release to date. With vinyl in heavy demand, the album will be released in multiple formats to accommodate enthusiasts. A full fledged, headlining European tour will coincide with the release, serving as the start of a worldwide campaign.

Matter Ov Fact and EP have been known to don black cloaks to represent the Black Cloak lifestyle. This way of life entails making the most out of available resources, no matter how limited they may seem. What might be viewed as a disadvantage for some artists, has become a strong point for The Doppelgangaz. They take pride in handling their own production, designing their artwork and directing their own music videos. The ability to oversee every aspect of the creative process has allowed the gang to present cohesive projects that uphold their ghastly vision.