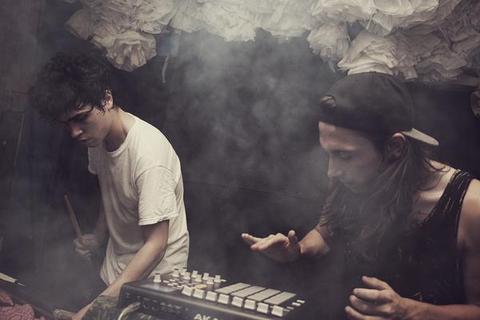 Mike Perry & Austin Keultjes -- are scholars of every genre they borrow from. Leaning heavily on the ideals and aesthetics of modern rap and its sub-genres, especially Footwork, they cast a wide net into the sub-bass heavy recesses of DatPiff and YouTube and skim the cream from the top.

The resulting downtempo beat-compositions are buoyant, urgent, vicious things, yet they remain foetid with all the funk of a Bangladesh beat turned-velour and then screwed into oblivion. Obsessives about the ghetto house of DJ Funk and the angular work of Philip Glass, Perry & Keultjes produce a gripping future music of lilting polyrhythms and narrative complexity that is impossible to peel the film of THC and sweat from.

Supreme Cuts' collaborations with Main Attrakionz, How to Dress Well, Wise Blood, Haleek Maul, Holy Other and more have contributed to a growing reputation, rapport and cred in the indie world, but usurping those who currently occupy the beatmaking throne is their end-goal. On Whispers in the Dark they plumb the depths of their influences and slowly exhale a wisely-chosen reconstitution of all that has been great about electronic music for the past 40 years.