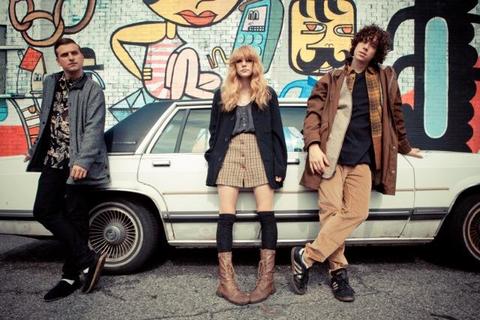 Hailing from America's center, Omaha-based Icky Blossoms formed in the blizzard of 2011 through friendship, trials and a mutual desire to make art and new music. A brainchild born from the boredom of sitting still. Guitarist and vocalist Derek Pressnall met Icky Blossoms vocalist Sarah Bohling and lead guitarist Nik Fackler in the vibrant Omaha art scene and invited them to play in his band Flowers Forever. Enchanted by endless nights in clubs and inspired with a desire to program dance music with instantaneous grooves and depth, Pressnall, an acclaimed visual artist, and Fackler, a spirit-award nominated filmmaker, combined with Bohling's mesmerizing voice and formed Icky Blossoms.

Icky Blossoms combine bass-heavy electronic grooves, pop structure, and a rock & roll swagger to pioneer a sound on the audio vanguard: music that is simultaneously avant garde, catchy and danceable. Their music spans from the anthemic to the introverted, chronicling the twists and turns of the human condition. Nodding to great sub-genres of the past, while creating songs firmly propelled into the future. Each band member arrives at the group from distinct musical backgrounds and collectively cite varied influences including contemporary pop, electronic, hip hop, experimental, no wave and world music. When Derek, Sarah, and Nik each input their particular inspirations they create a final product that is not only wholly unexpected, but greater than the sum of its parts.

Icky Blossoms' sound and explosive live shows caught the attention of Omaha's distinguished Saddle Creek, which has since signed the trio to release their debut LP. The self-titled album, produced by Dave Sitek from TV On The Radio, is slated for a July 17, 2012 release and features tracks that range from "Perfect Vision," an experiment based around trunk thumping low end and chainsaw guitars, to "Babes," which was lauded by Rolling Stone as a "girl-power dance anthem." Other standout tracks include "Heat Lightning," with its hypnotic arpeggiated synths, electro pulse and sirenesque vocals; the more raucous "Sex to the Devil," featuring futuristic synth lines and esoteric lyrics; or "Temporary Freakout," a classic pop song within an unconventional structure.

With a strong emphasis on DIY, the trio plans to integrate all their artistic abilities into the band, able then to better connect with those who choose to follow their creations or attend their live shows. Imbued with a celebratory atmosphere, their concerts have grown to be conduits for personal expression and individual creativity for everyone in the room. Loud, sweaty and out of control, the edge of their music and personalities combine with the hooks of their pop songs, creating a show which is one side dance party, one side mosh pit.

By brazenly denying to be subservient to a single genre or medium, Icky Blossoms is set to garner the attention of a truly diverse audience and make a lasting impact on music to come.