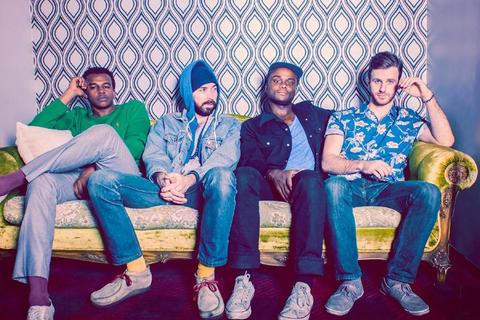 "There's a place for us scattered and uprooted peoples," says Sinkane mainman Ahmed Gallab, "a place we can all know as home, with elements of all our homes." That place, as it turns out, is Mars.

On one level, Mars is dense with deep, polyrhythmic grooves that hail directly to Africa; on another level, it's a 21st century party record that acknowledges the global music village in which we all now live. The music of Mars is kinetic, sexy and catchy. But at its core, it's one man's way of working through a very American story.

Gallab's family left Sudan when he was a boy, immigrated to the U.S. and moved all over the country. He went to high school in Kent, Ohio. There, he found his first musical community in the town's unsung but thriving post-hardcore scene. He became the touring drummer for Caribou in the spring of 2008, then toured with Of Montreal that summer and fall before moving to New York City. Soon, he joined Yeasayer and toured the world with them, playing all sorts of instruments, for three years. Not bad for the kid from Khartoum.

Still, he was lost. "I pretty much spent my days contemplating what it was all for," he says. "I did understand one thing, though: I knew that there was a creative energy inside me — it came from my background, the influence of various people I'd met all over the world, traveling, listening and dreaming of the ideal place. I knew that I was on a journey, that I was definitely headed somewhere." And that's how Sinkane was born.

The name Sinkane comes from J. Ivy's verse on Kanye West's "Never Let Me Down" —"I want to give us 'Us Free' like Cinqué," a reference to Joseph Cinqué, who led the Amistad rebellion. Gallab misheard "Cinqué" as "Sinkane," figuring it was "some monolithic African god like Shaka Zulu or something." By the time he figured out the mistake, he already had a name for his musical project.

He also had a drummer. At Gallab's first rehearsal with Yeasayer, he met Jaytram. "I knew Jaytram was going to be in Sinkane as soon as he sat down to play," says Gallab. "He's the best drummer in the world. He'll make the most ornery listener believe."

While elements of Mars come from all over the world, the album is very firmly rooted in a specific place: "This," Gallab says, "is very much a New York album." He met virtually everyone who appears on Mars within his first year of living in the Big Apple. But more to the point, Mars is the sound of someone figuring out how to exist in New York, as a stranger in a strange land — a feeling anyone can relate to anywhere.

That's why the album is called Mars. People use Mars to describe some place alien, weird, foreign, a place they don't understand. "It's where I feel like I am right now," says Gallab, "a desolate, tropical place filled with hope, ambition and love."

Yeasayer's concise pop songwriting was a perhaps inevitable influence on the music of Mars, so were Of Montreal's melodies and gift for combining genres, as well as Caribou's attention to sonic architecture. But there's also the unmistakable influence of '70s soul icons like Curtis Mayfield, Marvin Gaye and Stevie Wonder. You can also hear Sudan.

"The music and culture of Sudan are a big part of me," says Gallab. "When I play guitar I always fall back into Sudanese-sounding melodies; when I play drums I always want to syncopate like in Sudanese songs. It's unavoidable. But I'm not interested in creating Sudanese-sounding songs. I want to create universal music."

The backstory of diaspora is built right into the music. "Runnin'" is based on advice Gallab’s father gave him about being a Sudanese immigrant, warning him that he had three strikes against him: he was black, African [and Muslim]. And so, his father told him, "You have to work harder than anyone else to prove that you are doing something." Perhaps it's no coincidence that Gallab plays every instrument on the song.

Gallab became obsessed with pop songs written in odd time signatures: famous songs like "Money," "All You Need Is Love," or "Solsbury Hill." "Lovesick" is his contribution to the genre, with Miles Davis and Can thrown into the tune's sticky 7/8 groove. "The lyrics came out of a conversation Greg [Lofaro] and I had," Gallab says. "We were complaining to each other about how annoying it was that young people only go out to try and get laid."

The words to "Warm Spell," says Gallab, came from another conversation with Lofaro, this time about getting day drunk on Jaytram's roof. "The groove and melody," notes Gallab, "are very distinctly Sudanese." "Feel your blood warm up," he sings. "Fall in drunken love and stay/ There just aren't enough/ Never too much of the days and the nights."

All Gallab will say about the enigmatic "Jeeper Creeper" is, "It's about conquering evil. There are lots of evil spirits around and it's important to accept them and beat them. They shouldn't be ignored." The groove and melody are also distinctly Sudanese, but listen to the countermelodies and you'll hear both country-western and west African music.

Roberto Lange, mastermind of Helado Negro takes over lead vocal duties for the final song, "Caparundi." It's sung in Spanish, the language of many other people who are finding their bearings on Mars.

"This record is therapeutic for me," says Gallab, "but if I want people to get anything out of it, it's the fun and pleasantness of that hardship. Looking back on it, I made lemonade."