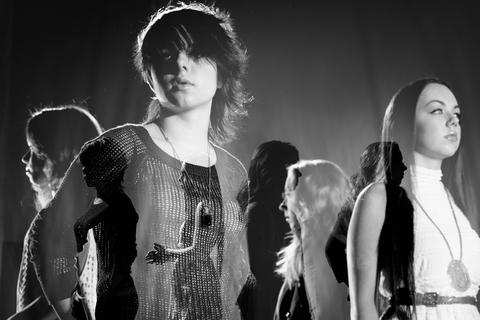 Listen to Coming For You

With their soulful four-part harmonies, poetic lyrics and indelible melodies, it’s easy to see why the Atlanta Journal Constitution would hail von Grey as “nothing short of stunning.” They sound like they were born to play together – and, in fact, they were. The four sisters have been playing music nearly their entire lives. Classically trained from an early age, the Atlanta-based quartet – Kathryn, Annika, Fiona and Petra von Grey – have built on that foundation by performing upwards of 200 shows in the past two years, from recurring residency tours at intimate venues throughout the southeastern U.S. to supporting gigs with such artists as Sarah McLachlan.

“There are times when musical expression is more important than perfect execution,” explains Fiona. She and Annika are von Grey’s lead vocalists and chief songwriters. “There are times I want to hear my fingers slide on the guitar string, when the breath I take before a phrase is as important as the lyric that follows.”

Working in a vein similar to that of such contemporaries as The Civil Wars and Mumford & Sons, von Grey masterfully melds folk, bluegrass and country influences, imbuing time-honored musical idioms with a distinctly modern sensibility. From the opening “What Am I,” a stirring plea for unity and understanding, to the bittersweet “Shane,” the collection provides a remarkable introduction to von Grey.

“It’s only the beginning,” says Annika. “Each step makes us eager to reach further. There’s always another emotion or thought aching to be shared in just the right way – the rhythm of living.”

Indeed, it’s their attunement to this rhythm that makes von Grey’s songs at once so personal and so universal. It’s music that not only speaks to us, it speaks for us.