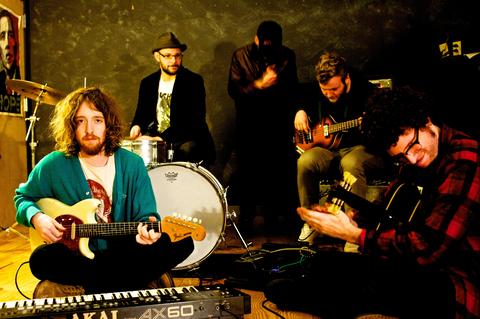 DRGN King began as an unlikely pairing. Before the inception of DRGN King, Dominic Angellela, vocalist and principle songwriter, could be found on a different Philly stage every night. Involved in everything from Americana to arty grunge, Angellela had become a staple on the Philadelphia music scene. In a chance recording session in 2010, Angellela was matched up with south-Philly producer Brent “Ritz” Reynolds, the man behind cuts from The Roots and Mac Miller. The two immediately hit it off, using each other’s unique sound and talents to create a niche entirely their own in DRGN King. While Angellela gave Reynolds the songs to expand his production finesse in a more rock world, Reynolds gave Angellela the tools to seamlessly marry his varying musical taste and interests into one project.

In the past two years, DRGN King have taken root in the Philly music scene, earning praise from WXPN’s The Key, who have outwardly stated their eager anticipation of Paragraph Nights (out 1/22 on Bar None Records): “With each new song they drop, I get all the more antsy to hear DRGN King‘s debut full-length Paragraph Nights.” They also received a nod from Paste Magazine, who had WXPN’s Bruce Warren name “11 Pennsylvania Bands You Should Listen to Now."

“Paragraph Nights looks and feels like one of those nights in college where everyone tried the same drugs and no one was allowed off the couch for anything other than to piss or get more drugs. I'm okay with this. WE LOVE DRGN KING.” - SYFFAL.com

"DRGN KING sounds exactly like what smelly stoned group sex would sound like. It's messy, it's silly. It's certainly different, but not scary different, awesome different." Vice