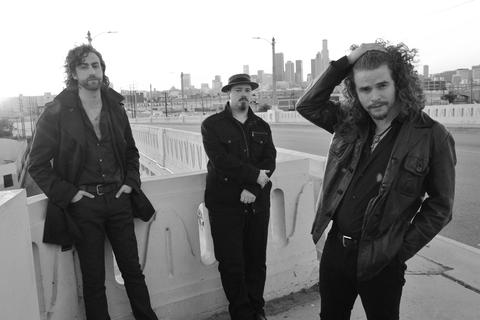 Listen to Let's Be Friends

You've got to be bold to make it rock 'n' roll.

LEOGUN singer and guitarist Tommy Smith might characterize it as "cheeky", but it all comes down to the same thing. The genre's history is earmarked by countless musicians who took a risk and lived through a life-changing night.

Smith's big evening was in 2009. He managed to talk his way backstage at an Eagles of Death Metal gig in his native London. While behind the proverbial "velvet rope," he met Dominic Fairbanks-Weston of Fairbanks Endorsements LTD. Weston was completely taken by the young rocker's audacity and talent, and he introduced Smith to Rocket Music Management founded by Elton John. Soon after, LEOGUN had become a client of the international management powerhouse and inked a record deal with Yamaha Entertainment Group.

"Whenever one of my favorite acts played London, I made sure I was at the show," recalls Smith with a smile. "I was always trying to get backstage so I could meet people and tell them about my music. It's crazy how it all started with me being cheeky and ending up in the right place at the right time. You can't be arrogant, but you've got to at least ask for what you want. I'm one of those people who will ask."
Smith's unwavering confidence remains completely warranted though. LEOGUN distill gritty rock, swaggering blues, and haunting soul into anthemic and artful songs. The music remains strong, sexy, and staggering, echoing Jack White and Queens of the Stone Age with personal panache. It's also something that Smith has been working towards for his entire life.

Raised in a house filled with the sounds of Pearl Jam and Led Zeppelin, Smith became transfixed by a blues record his mother was playing one afternoon. He didn't have a choice at that point. He needed to pick up a guitar, and the 8-year-old began studying everything from classical music to jazz. Even though he attended the Wilmington Grammar School for Boys—the alma mater of Keith Richards—he was bullied because of his long hair and band t-shirts. Nevertheless, the budding artist found his musical soul mate in Matt Johnson at age 13. Bonding over Pearl Jam's Binaural, Smith encouraged his new friend to pick up a bass, and they were playing pubs in London two weeks later.

After years of jamming together, the group formally came to life when the boys reached legal drinking age. "It's also when I learned how to write a song without ten-minute solos," laughs Smith.

Under their previous moniker Mad Dog, Smith and Johnson turned heads locally. The frontman also attended that fateful Eagles of Death Metal concert, and everything moved at a rapid pace. In early 2012, Chris Gero of Yamaha Entertainment Group heard the band, and immediately signed them as the flagship act for the label.

"It's brilliant," enthuses Smith. "Everything is so fresh. The label is just as excited as we are. We're not just another artist at the bottom of a massively long list on a giant roster. We're their first signing, and they've got as much vested in us as we do in them. We're all moving in the same direction. It's like being part of a crew on a ship."
That "ship" landed in Nashville at the iconic Blackbird Studios where everyone from Kings of Leon to The White Stripes have recorded. With Gero and Grammy Award-winning engineer Bryan Lennox behind the board, the musicians cut directly to analog tape, eschewing Pro Tools and all of the other digital trickery so prevalent these days.

About recording in the music capital of America, Smith exclaims, "I'm very into buying my Mojo and Rolling Stone magazines. I love musical memorabilia, and I still buy records. All of my favorite artists mentioned Nashville at one point. It seemed like Never Never Land. I nearly cried when I found out we were going there. It was a dream come true. My jaw didn't come off the floor for months."

Yours won't come off the floor either as soon as you hear the band's debut single, "Let's Be Friends." A slick riff snakes through a bombastic beat before slipping into an arena-ready refrain.

The singer goes on, "It's about not being afraid to be a man and tell a girl what's up. It seems like all of the testosterone has been taken out of music. There are no frontmen fucking hitting it like Robert Plant. I miss that. I want to commit myself to singing what's on my mind. If I'm thinking of a young lady, I'm not going to hold back. I'm going to sing about that."

Elsewhere on "End of the World", LEOGUN paints a cinematic picture of a crumbling world that's both raw and relevant to Nostradamus’ imminent prediction. Of course, the distortion is turned way up as well. Passing the seven-minute mark, "By the Reins" seesaws from a smoky blues lead into hulking organ and guitar bombast.
After working with various session drummers, Tommy and Matt approached longtime friend Mike Lloyd to jam with them. After a mosh pit erupted during a Camden gig, it was clear that Mike was the missing piece. He now stands out as a backbone of the sound.

There's nothing quite like seeing the group on stage though. They've won over crowds at massive festivals such as Sonisphere and Bestival as well during an impressive four performances at SXSW. As their four-song EP drops October 16th 2012 and a full-length hits in early 2013, they'll be ruling the road for quite some time to come.

In many ways, their entire ethos can be traced back to their name. LEOGUN means half-man and half-lion. It's rather apropos with what's roaring from their amps.
"People would say my hair looks like a lion, and we try to perform like lions up there on stage," says Smith of the name. "It's all about being honest. I'm quite an excitable person so I play the guitar like my life depends on it. That's what I hope people see. There's no joke. Let's play these things until our fucking fingers fall off."
There's nothing bolder than that. — Rick Florino, August 2012