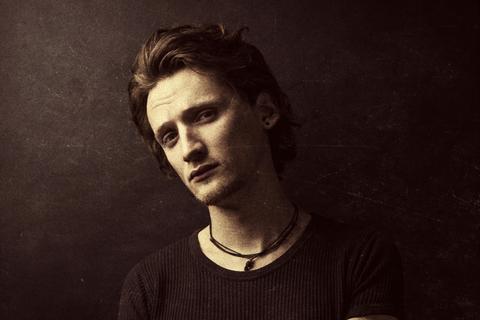 Joe Banfi is a boy with a guitar but he’s more than just a lonesome acoustic troubadour. He’s not just a singer-songwriter, either, nor is he simply a musician with a voice. Here is someone whose intention it is to have his name embody a whole series of sounds and instruments, to signify an ethos, an aesthetic. To represent the idea of the solo artist as something more.

“I want to be seen in the same way that people like Bruce Springsteen and Jimi Hendrix, Peter Gabriel and Kate Bush are seen,” he says. “The folk singer-songwriter side is only 10 to 15 percent of what I’m about.”

For some sense of what Joe Banfi - a 23 year old from Northwich, a small commuter town outside of Manchester - is about, imagine Kurt Cobain if he had gone out on his own before Bleach or after Nirvana and hooked up with a producer up to the task of providing a wide-ranging palette of atmospheres and effects. One minute he’s singing in a whispering falsetto over sparse backing, the next he’s rasping and roaring over a wall of incendiary noise. The impression given is of a young man capable of anything.

No wonder Communion picked up on him and put his track, ‘Olive Green’, on their recent New Faces compilation.
“It was my ideal home,” he admits of the label. “They have real integrity. I couldn’t believe it when I signed with them because I never thought it would happen.”
Communion’s Kevin Jones and Ben Lovett could tell from Joe’s demos that he was channelling the right sort of artists in exactly the right way, offering a new, unique mix of vintage elements - of Nick Drake and the Deftones, of folk and grunge, even metal. And you can hear the speed with which he’s developed and progressed from winsome folkie to multifaceted recording artist over his two releases, 2012’s Iron EP and his forthcoming Nomads EP.
He wrote his first song, aged seven, and began playing guitar two years later. He learned about riffs and rock dynamics from his cousin, about ingenious, intricate song structure from the Deftones, about fingerpicking from Nick Drake and about riveting storytelling from Springsteen, specifically the Nebraska album.
The Boss’ famously bleak collection spoke even more directly to Joe after he moved to Sheffield, former steel city, to study Philosophy at University.
“Yes, it made more sense,” he agrees. “I spent a lot of time around Kelham Island where there were a lot of industrial works. Then again, I come from the countryside on the outskirts of Northwich, where there are no shops, just one pub and the fields can go on forever, especially in winter, and that can seem pretty bleak in its own way. It’s pretty tranquil and beautiful in its own way too.”
Some of that bleakness was captured on the debut Iron EP and teased out by Communion’s in-house producer Ian Grimble. It included his interpretation of the American folk song made famous by Nirvana, Where Did You Sleep Last Night?, See You At Home, and the title-track ‘Iron’, inspired by Cormac McCarthy’s novel The Road.
Joe is becoming increasingly adept at filtering personal feelings and autobiographical experiences through historical or fictional narratives, using the first-person to offer universal takes on the human condition. On the Nomads EP, on ‘Family’, ‘Oarsman’ and the title track, he delves back in time to explore the perennial nature of emotions, of suffering and isolation, frustration and despair.
“I write in the first person for most of my songs because I like the way it sounds, but it’s not always my perspective,” he explains. “I like to use different personas to bring out different perspectives. The songs address everyday feelings. ‘Nomads’ is about being left behind. ‘Family’ is about taking things for granted. And ‘Oarsman’ is about sticking with something. I use various scenarios from the past to articulate feelings because I’m more comfortable doing that. A lot of the time, though, I just let my subconscious do the talking.”
Joe is heading towards a fuller realisation of his influences: a symphonic, studio-enhanced fusion of the folky and metallic, of the ragged and the refined.
“My new songs are getting louder,” he says. “I want to merge the expansiveness of metal with the intricacy of folk. And I want to fuse the heart and warmth of folk with the power and release from frustration that folk can’t get near. By the time my debut album comes out I’m hoping people will hear my name and think of me as a band, in a way, because of all the sounds and instruments - whether they’re distorted guitars or heavy drums or whatever - that will be involved. My two EPs are part of an evolution, and the next record will be even bigger and have even more of a band aspect.”
He’s also moving towards the perfect expression of his lyrical ideas.
“I love beautiful things and ugly things,” he decides. “I want my lyrics and overall sound to somehow express that conflict, that duality, to try and make sense of it.
“I try to create a heavy, expansive sound with moments that are heart-warming and delicate, and also moments that are chilling and fragile,” he furthers. “What's essential is the sheer range between things that are supposed to conflict, like delicacy and power or warmth and anger.”

His songs address his “worries and concerns, questions that I don't know the answer to”, the result, perhaps, of studying Philosophy for so many years. Some of these questions arise from his doubts, fears and confusions regarding the conflicted nature of the human experience.

“It’s not like I’m some tortured soul,” he laughs. “I appreciate the beauty in the world. But there’s so much ugliness around, so many people wanting to fit in, afraid to be different. I’m interested in the things that unsettle me: issues like jealousy and loneliness and arrogance and pride. I’m trying to get closer to the truth.”

Joe Banfi’s search for the truth and powerful musical fusion of opposites mark him out as really special. One to watch in 2013, and then some.