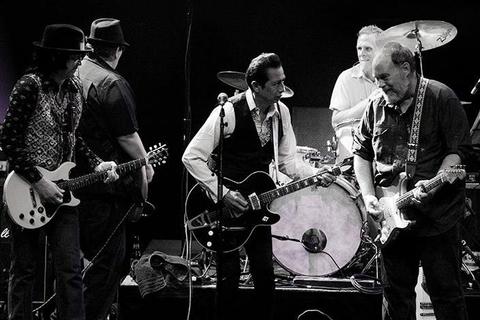 Last September, five Austin bands and more than a thousand friends and fans gathered at the Moody Theatre, home of the Austin City Limits television series, to pay tribute to Brent Grulke, the music director of South By Southwest, who unexpectedly passed away at the age of 52.

Closing out Grulkefest were The True Believers, the band that Grulke had mixed sound for in their earliest days in 1984. The band fittingly gave their old friend a powerful sendoff by delivering a scorching set of three-guitar Texas rock and roll that left the audience screaming for more, and the band feeling like they had some unfinished business.

The five original members – Alejandro Escovedo, Javier Escovedo, Jon Dee Graham, Denny DeGorio, and Rey Washam - had such a good time playing the songs that brought them into the international limelight in the late 1980s, they decided to put their respective careers on hold to do it again, showcasing at South By Southwest.

The Troobs are ready to rock.