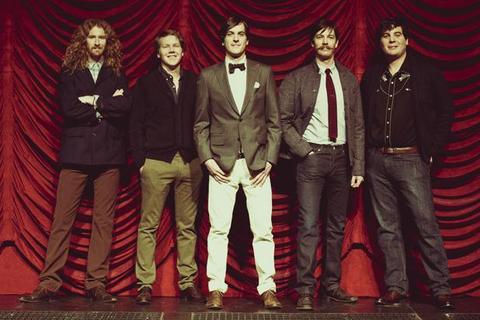 “Long, Hard Road,” the first song on the Wheeler Brothers’ first album and a title that gives you a pretty good indication of where this Austin, Texas five-piece feels most comfortable. Indeed, although they’re five-time Austin Music Awards winners who’ve never played a hometown gig that hasn’t sold out, the Wheelers view the world as one big stage.

“We’ve always respected the bands that just get out there and work their asses off,” says singer-guitarist Nolan Wheeler, who adds that the band’s goal this year is to play 200 shows by Christmas. “There’s really no better way to create a connection with your audience.”

Nor is there any better way to refine your music—to find yourself in it and discover what makes it yours. That’s precisely what the Wheeler Brothers—who also include bassist Tyler Wheeler and drummer Patrick Wheeler, along with guitarist Danny Matthews and lap-steel whiz A.J. Molyneaux—have done over the past two years, honing a unique roots-music sound PasteMagazine.com has described as bringing “a bit of the enthusiasm and flavor of The Arcade Fire into their Texas-tinged Americana” and Carson Daly has called “…music at its finest. Rock & roll with a bit of twang…”

They’ll be the first to tell you: Portraits, the group’s remarkable debut, arrives steeped in tradition, with a sound as rich as Southern soil with echoes of Willie Nelson and Townes Van Zandt, not to mention more recent trailblazers such as Wilco and Radiohead. (And let’s not forget Western swing institution Asleep at the Wheel, whose frontman Ray Benson released Portraits on his Bismeaux Records.)

But in these rough-and-tumble songs of home and heartbreak, fortune and family, the Wheelers tell their own stories, as well, drawn from their experiences as young men with old souls. In “Call Me in the Morning,” a propulsive rocker with fuzzy guitars, they channel the exuberant innocence of one’s salad days, while the quieter title track paints a heavy scene inside a hospital room; elsewhere, they envision life from different perspectives, as in the horn-enriched “Spent Time,” which ponders the way a just-released prisoner might greet the sky.

The Wheeler Brothers’ yarn-spinning dates back to their high-school days, when they first began jamming at the Wheelers’ place. “We’d just be in there, drinking beers, having fun,” A.J. remembers. Upon graduation, the lap-steel player enrolled at the University of Texas, while the band’s other four members went off to Louisiana State University; they played together during their time there, but things didn’t lock into place until their return to Austin, at which point A.J. rejoined the group and the quintet began playing around town.

“The support we’ve gotten from the community here has just been incredible,” Tyler says, and it’s that solid base—coupled with their extensive social-media presence—that’s allowed the Wheeler Brothers to venture out, wowing audiences around the United States between recording sessions for their upcoming sophomore disc.

“For us it’s just about writing great music, playing killer shows and staying in touch with our fans,” Nolan says. (To that end, the Wheelers travel with a special cell phone anyone’s welcome to call for a chat. Seriously, give it a whirl: 512-983-5934.) Of the new album, they can’t say much yet, except that it’s sure to reveal an evolution of one kind or another.

“I think we’re constantly in a place where we’re developing our sound,” Danny says, calling to mind again that long, hard road. “We’ll always be striving to make it more our own.”