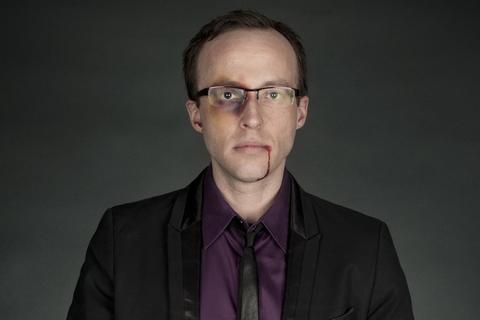 Schaffer the Darklord (or STD) is a New York City-based rapper and comedian with material best-suited for brainy and/or drug-addled audiences. With manic energy, verbose vocabulary and cartoonishly commanding stage presence, STD skewers such topics as hedonistic substance abuse, sexual compulsion, gender identity, urban anxiety and obsessive cat-enthusiasts. Imagine a Frankenstein-esque monster assembled from equal parts Bill Hicks, Beastie Boys, Prince, Ozzy Osbourne and Darth Vader, stitched together inside the shell of a maniacal heavy metal ex-patriot. STD has released four full-length albums and toured the country with mc chris, MC Frontalot and MC Lars. When he's not on the road, he guest hosts countless burlesque events and also co-produces and co-hosts his own nerdy, themed production, Epic Win Burlesque. His releases (2004's "Meet My Maker," 2007's "Mark of the Beast," 2009's "Manslaughterer" and 2012's "Junk Drawer") have been treated to steady sales and second pressings, and the music video for his single "The Rappist" has garnered a half million views on YouTube. He has also made appearances on the Science Channel television program "Oddities." STD continues to write, record and perform with great frequency and has no intention of giving up until his masochist rock-n-roll lifestyle destroys him.