Bruce Sterling is a science fiction author known for his novels, short fiction, and editorship of the Mirrorshades anthology. He was a proponent and instigator of the cyberpunk sub-genre. He is also a journalist, design critic, Internet maven, and cyberspace theorist.

Sterling's first science fiction story, Man-Made Self, was sold in 1976. He is the author of science fiction novels including Schismatrix, Islands In The Net, and Heavy Weather. In 1992, he published his first nonfiction novel, The Hacker Crackdown: Law And Disorder On The Electronic Frontier.

As a child, Sterling spent several years in India and has a fondness for Bollywood films. In 1976, he graduated from the University of Texas with a degree in journalism. In 2003 he was appointed Professor at the European Graduate School where he taught summer intensive courses on media and design.

In 2005, he became "visionary in residence" at Art Center College of Design in Pasadena, California. He lived in Belgrade with Serbian author and film-maker Jasmina Tešanović for several years, and married her in 2005. In September 2007 he moved to Turin, Italy. More recently, he has lived in Ibiza, Spain. He travels the world extensively giving speeches and attending conferences. 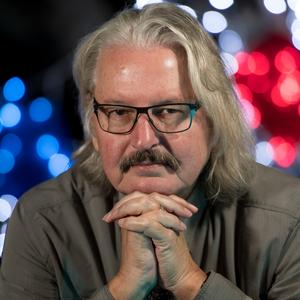