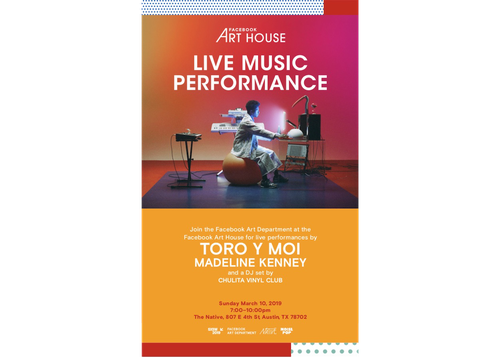 Chaz Bear, known professionally as Toro y Moi, is an American singer, songwriter, record producer and graphic designer. Drawing from a wide-ranging array of influences (Animal Collective, Daft Punk, and J Dilla among them), he is often identified with the rise of the chillwave movement. Bear now works and lives in Oakland, California. He recently completed a site-specific artwork at Facebook's San Francisco office as part of the Facebook Artist in Residence program.

Placing a dreamy finish on textured indie rock, Madeline Kenney is a singer and songwriter based in Oakland, California. Born and raised in Seattle, she started taking piano lessons at the age of five and later began writing songs. In her teens, she began several years of work as a professional baker, meanwhile earning a degree in neuroscience before relocating to the Bay Area in 2014. Finding work as a nanny and voice and piano teacher, she also started a small record label and learned engineering and production with help from the Women's Audio Mission in San Francisco.

Chulita Vinyl Club is made up of women, gender-non-conforming, non-binary, LGBTQ+ and self-identifying people of color. CVC launched in 2014, with the context of providing a safe space for empowerment, togetherness and to utilize music and vinyl as a form of resistance against the erasure of culture. Each Chulita identifies with their own identity. They are not to be classified as one nationality or culture. The unifying denominator is that they come together over the belief that EL DISCO ES CULTURA and they believe that is worth preserving and perpetuating.