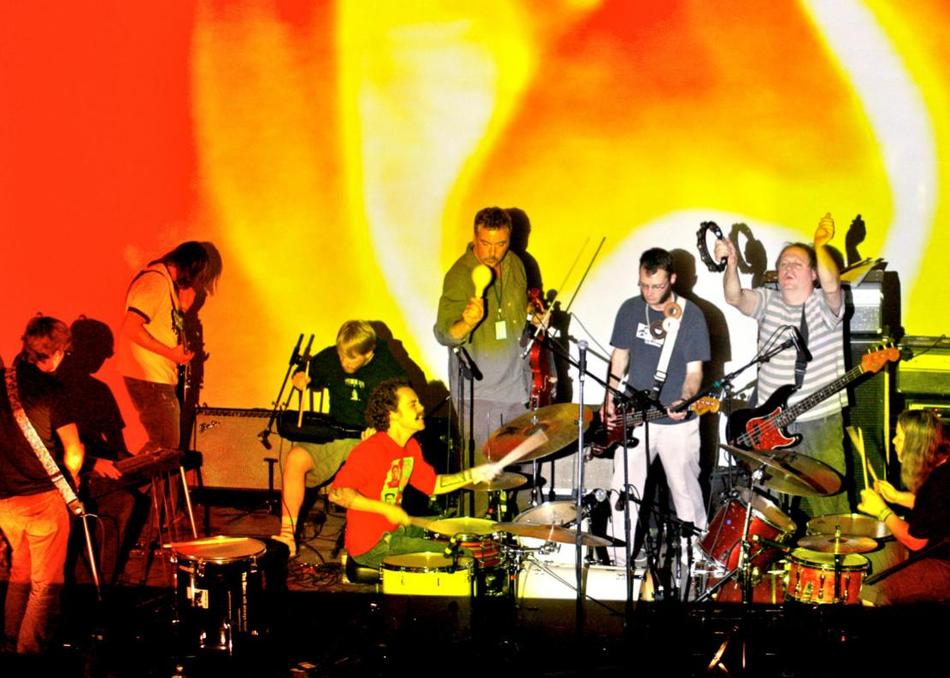 In June 2010, My Education found themselves in the midst of a West Coast tour with three days to kill in Salt Lake City. Luckily, guitarist Brian Purington had been in touch via email with Ryan Stanfield, the bassist of Utah’s finest improvisational collective Theta Naught, about a possible collaboration. Studio time was quickly booked, and both bands decamped to AudioSpace Studios to document their efforts. Nine hours and five soundscapes later, the ensemble had recorded what they have now affectionately dubbed Sound Mass. Suitably inspired by their efforts in the studio, both outfits quickly agreed that their planned show that night at SLC’s famed DIY venue Kilby Court should become an avenue for further collaboration and experimentation. Ten musicians squeezed onto the stage of the tiny venue. An evening of noisy, exhilarating, cacophonous and yet somehow controlled joyous fun ensued.

After preliminary editing and mixing of the Sound Mass tapes was completed in SLC by Theta Naught and engineer Hyrum Summerhays, the project was delivered to Austin and the capable hands of the Bump Boyz and Headbump Studios. The five tracks were whittled down to a single LP and thoroughly mixed with extensive harassment from the always-opinionated members of My Education. Indefatigable mastering engineers Sean Seagler [811 Studios; Austin, TX] and Bruce Kirby [Boho Digitalia; Salt Lake City, UT] stepped in and dished out the final (vinyl) product, which is now released as part of Differential Records' Harmonic Motion series. Both bands enjoyed the whole experience so much that they performed "Sound Mass" at a collaborative showcase for SXSW 2011 at the Hideout Theatre on Thursday March 17th, as well as at a day party on the same date at the Blue Theatre. Subsequently, the ensemble performed at the 2011 Austin Psych Fest as the final band to appear at Seaholm Power Plant, closing the whole shebang down with a midnight performance after Roky Erickson and the Black Angels.

Such a good time was had by all that both bands decided a sequel was in order. That summer, the massive ensemble reconvened for a series of regional shows capped by the recording of an ecstatic Daytrotter session at Big Orange studios in Austin in July. Over the course of the next two years, shows were played in Texas, Oklahoma, Louisiana and Utah, festival appearances were made at SXSW (again) and the Utah Arts Festival, and finally, after much roadwork had seasoned the big ensemble into a much more cohesive unit, the eleven “core” members of My Education/Theta Naught Sound Mass returned to Salt Lake City for another recording session with Hyrum. Cleopatra Records has brought forth the latest from the band, My Education/Theta Naught Sound Mass II: Spiritual Docking. This is the sound of two bands making love and melting together into a new whole. Gears mesh, belts whir, pistons pump, and something glorious is born. Cleopatra Records has also featured Sound Mass on their recent SPACE ROCK: An Interstellar Traveler's Guide boxed set.