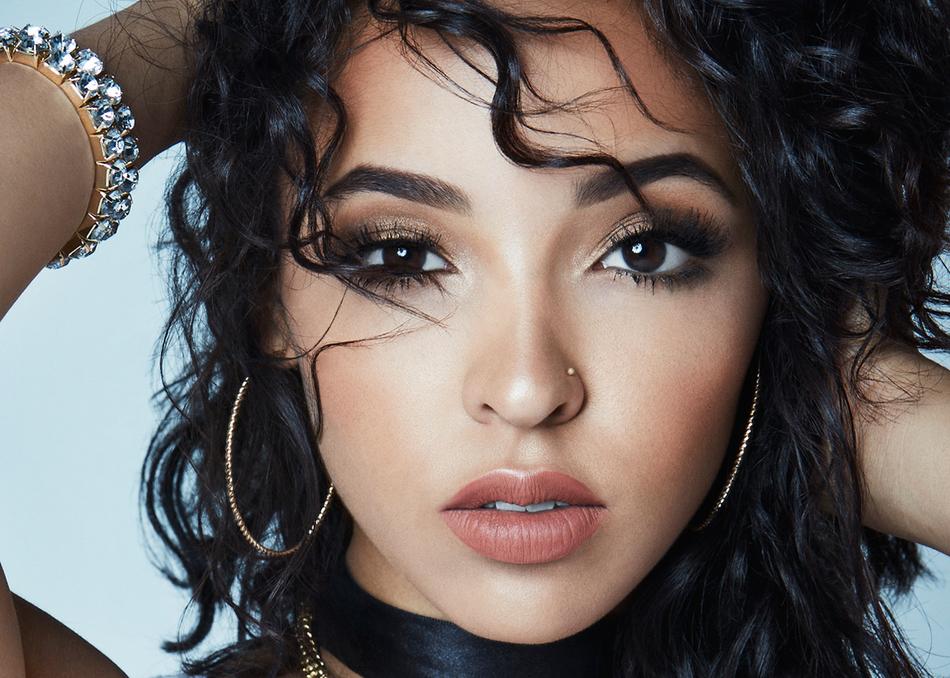 Tinashe does everything on her own terms. The stunning 21-year-old singer, songwriter, and performer arrives with a distinct and dynamic vision of R&B punctuated by hip-hop attitude, pop flavor, rock swagger, and electronica spark. It all comes to life vividly on Aquarius, her full-length debut on RCA Records.

That alchemical blend of genres can actually be traced back to her childhood in Los Angeles. Music surrounded the budding star at home as her father's Shona heritage filtered into daily life, building an atmosphere conducive to creativity and art.

"My dad's family is from Zimbabwe, and it's a very musical culture," affirms Tinashe. "From my earliest memories, music was all around me. It was part of my DNA, and I just loved everything about it. Doing music became my biggest goal as soon as I could sing!"

Getting in front of the camera for the first time, she started modeling with the encouragement of her family. Soon, that transformed into acting and she went on to star in her first film, 2000's Cora Unashamed, followed by a role in The Polar Express with Tom Hanks and a recurring spot on Two And A Half Men. However, her hunger to make music superseded everything, and she joined an all-female pop group The Stunners in 2007, placing acting on the backburner for the moment. The Stunners went on to sign a major label deal and open up Justin Bieber's My World tour before parting ways in 2011. That's when Tinashe's own dream came into focus clearly.

"I decided to pursue my solo career with everything I could," she recalls. "I learned how to record and tour while I was in The Stunners, but it was time for me to say something personal. I always want to create art that's true to who I am as both a person and an artist. So, at that point, I bought my own studio equipment and a camera in order to capture that. I wrote and recorded music and began releasing songs and videos online."

 Three mixtapes — 2012's In Case We Die and Reverie as well as 2013’s Black Water — left her growing fan base in awe. In the midst of everything, RCA signed Tinashe as she tapped into a sound that solely belonged to her. "It's progressive R&B," she exclaims. "It's not what you typically would expect. There are influences from so many different genres that come together in one melting pot. I want to experiment. I want to break boundaries."

The set's first single "2 On" featuring ScHoolboy Q and produced by DJ Mustard, solidifies Tinashe's presence. It held the #1 spot on Billboard's Rhythmic Charts for four consecutive weeks, while going Top 25 on the Hot 100 and becoming Tinashe's very first Top 40 hit. "I have a lot of songs that are a little more serious or emotional, but '2 On' is meant to be fun," she goes on. "It's about celebrating being young, going out, partying with your friends, and living it up. That was my inspiration. It's got a West Coast vibe, but it has my spin too."

That's only one side of this Aquarius. The second single "Pretend" sees her join forces with A$AP Rocky and super producer Detail [Drake, Nicki Minaj]. Over an airy beat, Tinashe delivers a breathy verse and a confessional, yet catchy chorus, emblematic of her range and raw talent. She reveals, "It's about dealing with people who put on a front because it makes them feel better about a certain situation. That's the emotional side of my music."

Elsewhere on the album, DJ Dahi’s entrancing production on “Bet” bristles underneath hypnotic vocals from Tinashe who croons, “I’ll be here to hold you. Bet on it.” Everything culminates on an incendiary outro guitar solo from Devonte Hynes. Then there’s “Cold Sweat,” which evokes nineties R&B with its own sexy panache bolstered by producers Boi 1da & Sango. Produced by Stargate, "Feels Like Vegas" shines as brightly as the flashing lights of Sin City with her undeniable voice taking flight during the refrain, "Just you and I, body to body, we getting out of this party."

At the end of the day, Tinashe doesn't hold anything back, and the world will get the opportunity to experience that honesty from every angle. "I dedicated my life to this," she leaves off. "I'm really focused. I'm on my grind. I'm not here to play games. This is one-hundred percent who I am, and I think the music says that loud and clear.”

History boasts many significant female Aquarians from Oprah Winfrey to Virginia Woolf and Zsa Zsa Gabor. Possessing an expansive vision and scope and powerful energy, as well as a zest for taking risks and giving back, Tinashe is the world's next larger-than-life Aquarius.