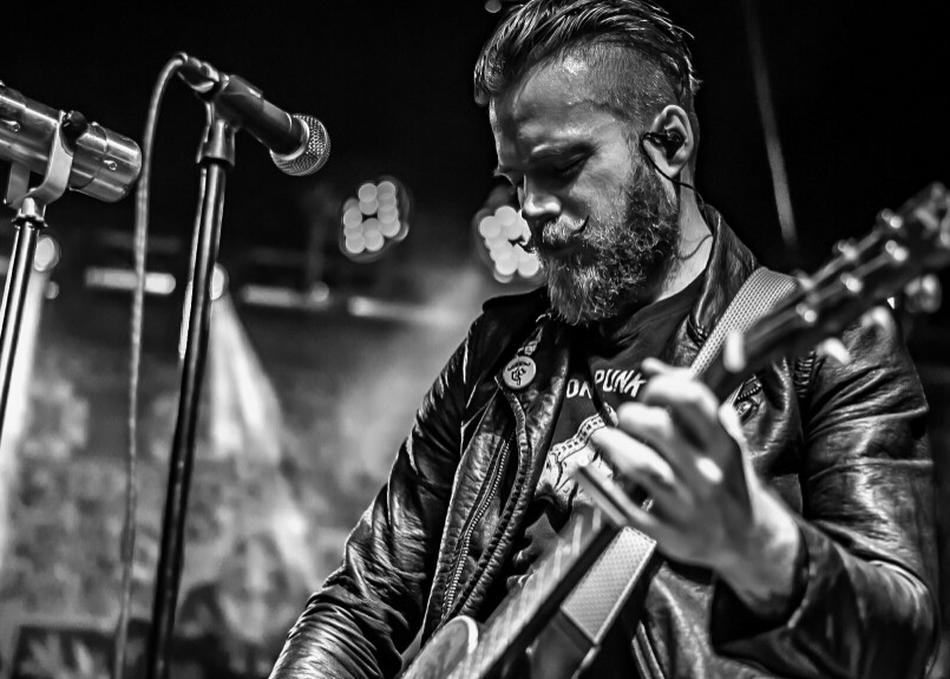 Lincoln Durham - Bleed Until You Die

Armed with old bastardized mid-century guitars, hand-me-down fiddles and banjos, home-made contraptions with just enough tension on a string to be considered an instrument and any random percussive item he can get his claws or hooves on, Lincoln Durham is an amped up Southern-Gothic Psycho-Blues Revival-Punk One-Man-Band preaching the good word of depravity. With driving guttural beats back-boning his growling instruments Lincoln births a sound that transcends genres while telling dark and raw tales that Mr. Poe would have blessed with his own tears.

His last album, Exodus of the Deemed Unrighteous, aimed to take a hundred-foot scythe to the doubters and the naysayers; and, as if he’s left the field decimated as evidence of his victory and has nowhere left to turn but inward, Revelations of a Mind Unraveling is pure descent into the internal agonies of Lincoln Durham’s tormented mind.

The first half of the album echoes the 19th century French poet Stéphane Mallarmé’s sentiment that “Poetry is the language of a state of crisis.” We might even imagine the ghost of Mallarmé smiling with pleasure while listening to Lincoln rambling that: “I find no interest in the methodical stabilities of the sane/For I delight in the shadowy corners of unhinged thought, eating up my bad brains,” in the song, “Prophet Incarnate.” This, ladies and gentlemen, is the moment that we as listeners, and thereby witnesses, begin to see an already frayed mind start to come undone.

As the record progresses and shifts into complete mental breakdown, one of the instants of greatest risk in the album also begets one of the most powerful images: “White dove sitting in a cage/Choking on the olive branch and waiting for his chance to unleash his cooped rage.” These lines are taken from the song “Noose” at a time in which we can’t be sure if the journey to the center of darkness has revealed a part of our narrator that must be killed or can’t be killed.

This, of course, begs the central question of the album: What happens when self-reflection reveals the demon inside? Well, to back up a bit: If you’re Lincoln Durham, you write songs about the demon. But also, you howl the demon out, you beat drums with it and wrap the strings of your instruments around its neck. And when it’s all said and done, you wipe the sweat off your forehead, look around at the wreckage of derailed sanity, and you take a bow.

Which is also a roundabout way of saying that Lincoln’s true story is in his live show. The hunger in his sweat-drenched, electrifying and mesmerizing one-man-band show makes you feel every scar and drop of blood in his painfully intimate lyrics. It takes something beautifully “off” to get on stage with just hands and feet for a band, to be driven by a howling voice, and to morbidly preach a music that harkens back to the old blues masters, Son House and Fred McDowell, infused with the edge and angst of Punk and darkened from the bad influences of Tom Waits and Nick Cave.

To watch Lincoln perform is to be a bystander to a soul collapsing in on itself. Audience members often report feeling like they’ve wandered into a two hundred year old ghostly church abandoned just outside the swamps of Louisiana. They say finding Durham is like opening a sealed-off (for good reason) door and being confronted with the piercing verses of a long exiled hellfire preacher. Others express having been exposed to the pits of realm never meant to be seen. You might say, as Lincoln does in “Bide My Time,” that what they see is his “countenance grow[ing] ever blacker, and [his] pallor brighter white,” as he digs deeper into the recesses.

A fact of this album is that the further he’s lost into the terrible domain of his own psyche, the more the listener is pulled into the void, as well. Expect to be leaning forward not just in body but also in spirit because what this albums is in its essence is the trashcan-loud sound of a man internalizing reality until it begins to tear at him from the inside and he has no choice but to take the plunge.

In the song “Creeper,” Lincoln sings “My mama said that before I could talk, I could flat-out rock ’n’ roll/She never said that before I could rest, I’d have to save my own soul.” These might be the most revealing lines in the entire album because at heart Lincoln is wielding his art as a means of coping with the world both inside and outside of him—which essentially means that this is a man playing for the highest of stakes: redemption.

Take a journey with Lincoln Durham and Revelations of a Mind Unraveling and you will be forced to face demons. At worst, you’ll end up a deranged fiend screaming on the sidewalk at children’s kites flying in the park. But it’s also very possible that, as a reward for standing at the edge and looking the thing in the mouth, you’ll get to exorcise a few demons of your own.