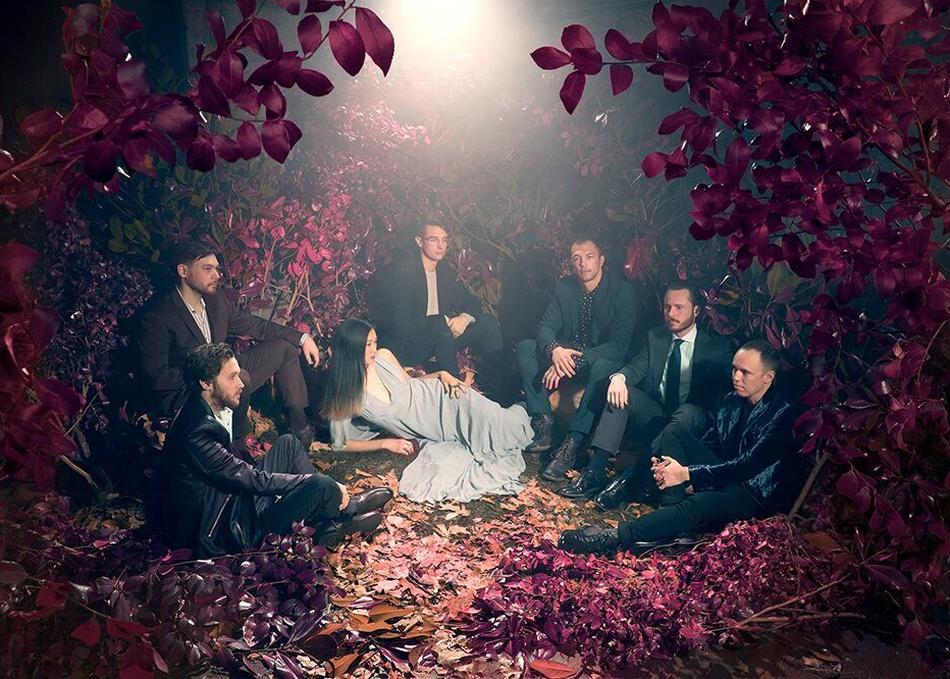 San Fermin’s third studio album, Belong, marks a shift in songwriting perspective for bandleader Ellis Ludwig-Leone. “ In the past I’d usually write through characters from books or movies, as away to try to distance myself from what I was writing about,” says the Brooklyn-based artist. “ As I’ve become more confident as a songwriter, I decided that I could drop some of the artifice and write something more direct.” In bringing a more personal slant to his music, Ludwig-Leone found himself confronting such matters as disconnection, displacement, and—perhaps most significantly—everyday anxiety. “ Anxiety is something I’ve dealt with since I was a kid, but on this album I talked about it more explicitly than I ever had before,” he points out.

Produced by Ludwig-Leone and brought to life by his fellow performers—lead vocalists Charlene Kaye and Allen Tate, trumpet player John Brandon, saxophonist Stephen Chen, violinist Rebekah Durham, drummer Michael Hanf, and guitarists Tyler McDiarmid and Aki Ishiguro—Belong unfolds in warm, intoxicating textures that both contrast and intensify that sense of unrest. The album’s hypnotic sound is embodied in “No Promises,” a shimmering pop opus about the fear of disappointing those who’ ve placed their trust in you. On the quietly frenetic “Bride,” San Fermin conveys a fear of commitment by juxtaposing the idyllic imagery of wedding flowers with a detailed account of suffering a panic attack. And with “Dead” (a song about “not wanting anybody to depend on you,” according to Ludwig-Leone), the band telegraphs defiance in a gorgeously jagged arrangement built on clattering rhythms and Kaye's penetrating vocal performance.

Elsewhere on Belong, San Fermin explores the intersection of desire and danger (on the subtly sinister “August” ) and paints a tender portrait of self-destruction (on “Perfume,” a sweeping and cinematic track laced with piercing lines like “You can lose anything that you put your mind to” ). On the brightly charged and bravely candid “Better Company,” meanwhile, Tate’ s intimate vocals meet with stomping beats and furious strings. “That song is about my lifestyle when I’m not on tour, how I just sit in the basement and work on music and the house is kind of a wreck,” says Ludwig-Leone. “It’ s recognizing how I don’t always keep myself the best company.” One of the album’s most powerful tracks, the slow-building “Belong” finds Tate and Kaye trading off verses to conjure up moments of gentle devastation. “‘Belong’ is about loving someone really deeply but also having the sad realization that you’re not always present with them,” says Ludwig-Leone. “But at the same time it’s also saying that that’s not necessarily wrong. It’s about acknowledging the isolation within love.”

Throughout Belong, San Fermin brings both elegance and raw passion to their performance, an achievement that Ludwig-Leone attributes to the band’s increasingly potent chemistry. “One of the nice things about this record was that, for the first time, I was writing for people I know super well and have performed with hundreds of times,” he says. “I feel like I really understand these musicians now and know what they want to do.”

For Ludwig-Leone, one of the greatest joys in making Belong was bearing witness to his band’s evolution. “It’s amazing to me that this thing I started by myself now has a shared consciousness and a life of its own,” he says. Describing Belong as “a record about realizing that you can’t always live with yourself, and finding a way to be okay with that,” Ludwig-Leone also notes that the album allowed him to reexamine the possibilities in songwriting. “There was a catharsis to writing these songs, where I was dealing with stuff that had been bubbling under the surface for a

while,” he says. “I don’t think writing actually fixes anything—but it helps you to name the problem and maybe figure out how to live with it, and sometimes that’s enough.”

Originally from Massachusetts and raised by artists, Ludwig-Leone began making music at age eight and later studied music composition at Yale University. After a job assisting composer Nico Muhly, he founded San Fermin and released their full-length debut in 2013, which NPR called “one of the year’s most ambitious, evocative, and moving records.” The band’s sophomore album Jackrabbit arrived in April 2015, debuting at #8 on Billboard’s Heatseekers chart and solidifying the band’s spellbinding live show. Lauded as “explosive” (The New York Times) and “exceptional” (The Wall Street Journal), San Fermin has sold out shows worldwide, appeared at such festivals as Lollapalooza and Austin City Limits, and has opened for the likes of St. Vincent, The National, Arctic Monkeys, and alt-J.