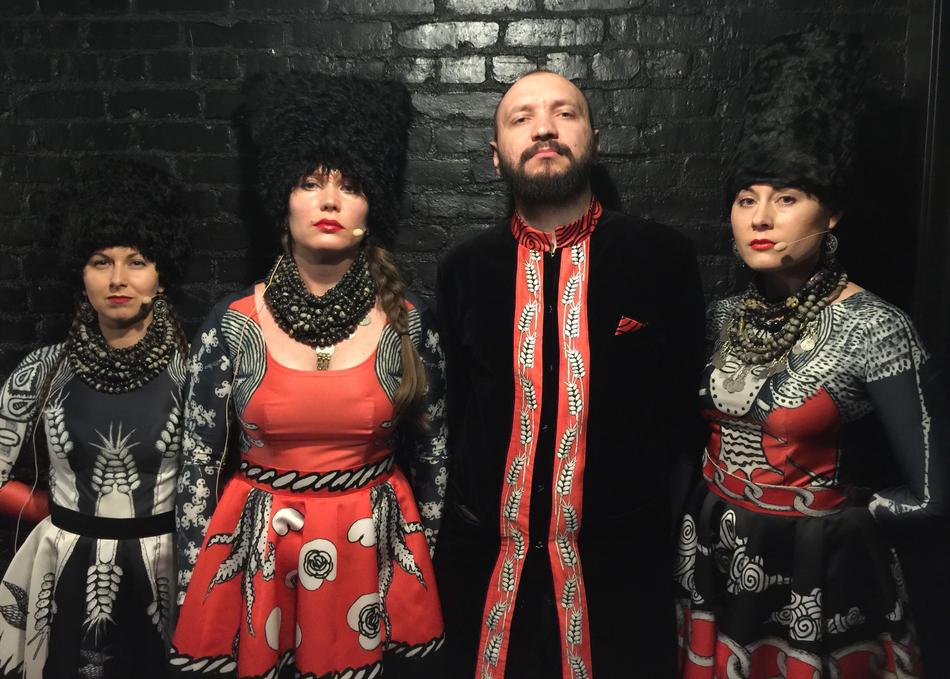 DakhaBrakha was created in 2004 at the Kyiv Center of Contemporary Art “DAKH” by the avant-garde theatre director – Vladyslav Troitskyi – and given the name that means “give/take” in the old Ukrainian language. Theatre work has left its mark on the band performances – their shows are always staged with a strong visual element.

After experimenting with Ukrainian folk music, the band has added rhythms of the surrounding world into their music, thus creating the bright, unique and unforgettable sound of DakhaBrakha. They strive to help open up the potential of Ukrainian melodies and to bring it to the hearts and consciousness of the younger generation in Ukraine and the rest of the world as well.

Accompanied by Indian, Arabic, African, Russian and Australian traditional instrumentation, the quartet’s astonishingly powerful and uncompromising vocal range creates a trans-national sound rooted in Ukrainian culture. At the crossroads of Ukrainian folklore and theatre, their musical spectrum is at first intimate then riotous, plumbing the depths of contemporary roots and rhythms, inspiring “cultural and artistic liberation”.

In March 2010, DakhaBrakha won the prestigious Grand Prix prize named after S.Kuriokhin, in the sphere of contemporary art, and confirmed its place in the culture once again. In March 2011 DakhaBrakha was discovered by Australian Womadelaide and began their ascent in the international music scene. They have since played more than 300 concerts and performances and have taken part in major international festivals throughout Eastern and Western Europe, Russia, Asia, Australia, and North America. DakhaBrakha has also collaborated with such international musicians as: Port Mone (By), Kimmo Pohjonen Cluster (Fi), Karl Frierson (DePhazz) (Ge), Steve Cooney (IRL), Inna Zhelannaya (Ru), Kievbass (UA), Djam (UA-Iran), and David Ingibaryan (Hu).