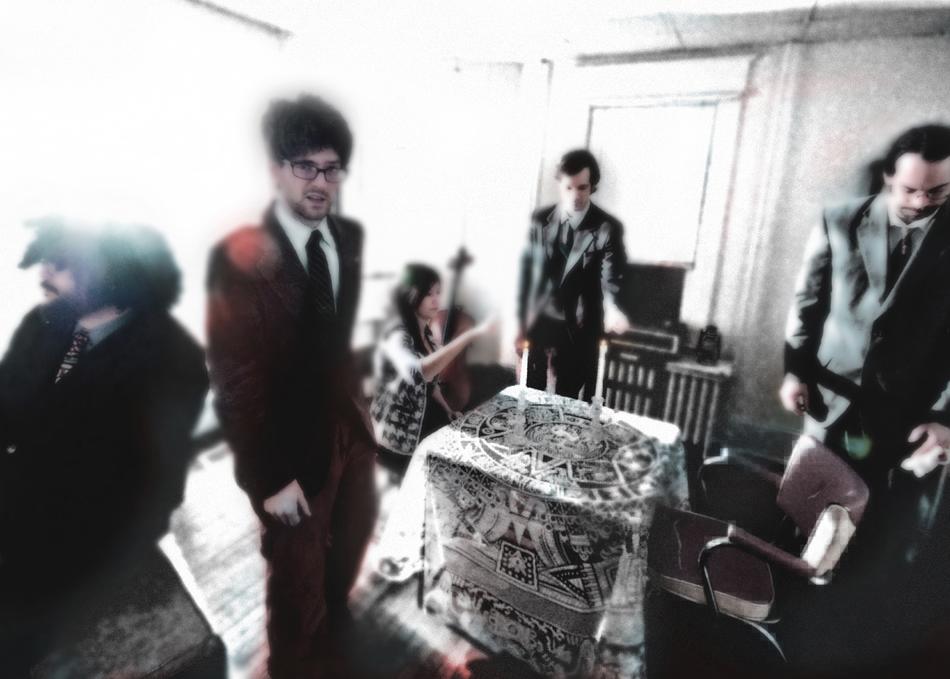 The Bastards of Fate - Freemasons

The Bastards of Fate sound like nothing you’ve ever heard before, a synthesis of everything that’s come before them, and a preview of everything that’s coming after. Their first two albums won praise from places like The Big Takeover (‘an uncompromising onslaught of demented pop’) and Magnet (‘walks the line between visionary and downright freaky. It’s a beautiful cacophony.’), but now that they’re on a real label, one that isn’t a weekend hobby, The Bastards of Fate are finally going to get the attention they deserve. Immaculately dressed and chronically depressed, equally comfortable amongst the mutants & the elite, the overworked & the effete, The Bastards of Fate have come to save music.

With songs about the struggle to be human in an inhuman world, delivered through a combination of humor & dread that rings true on every level, Suck The Light Out is a sonic feast, a lyrical extravaganza, an album that goes where others are too cool to tread. It’s where science meets love, where suicide meets hope. It begins with the ringing of bells, a Cardiff church recorded during a UK tour, before slamming into ‘Freemasons’ the band’s biggest, most anthemic song yet, with an opening line to die for:

‘A constant stream of bullshit / is coming from my mouth.’

The product of a collective lifetime spent in Roanoke, Virginia, trapped in its geographic isolation & omnipresent cold mist, it’s pointless to compare them to anyone. Suck Out The Light sounds like every genre of music ever recorded. Wellz, the bassist, has a list of every band they’ve ever been compared to, a rollercoaster of influences, from ZZ Top to Merzbow, from Sifl & Olly to Sparks. It’s Jarvis Cocker meets Frank Zappa. Frontman Doug Cheatwood writes like Kafka and dances like a stuntman. It’s none of these things. It’s everything. ‘Waste My Time,’ with lead vocals by keyboardist Cam, is the sweetest-sounding thing they’ve ever done. Shania Twain’s already tabbed it as her comeback single. The desperate ‘Dark Matter’ will make you weep, then smile, then weep again. ‘Unicorns In Love’ just makes you smile.

The Bastards of Fate understand what it’s like to be lonely, what it’s like to think too much, what it’s like to not think enough, what it is to live surrounded by spiders & fear, the walls closing in and all human interaction filtered through a screen, everything becoming so bleak that the only thing left to do is laugh. Because to see the humor in one’s spiritual death is to achieve true enlightenment.

A music world that doesn’t their avant-garde indie power pop, their dark/light thoughts, their endless hooks. their heaping scoops of melody & noise, is a music world that is dead inside, with nothing left to do but drop.

Events featuring The Bastards of Fate