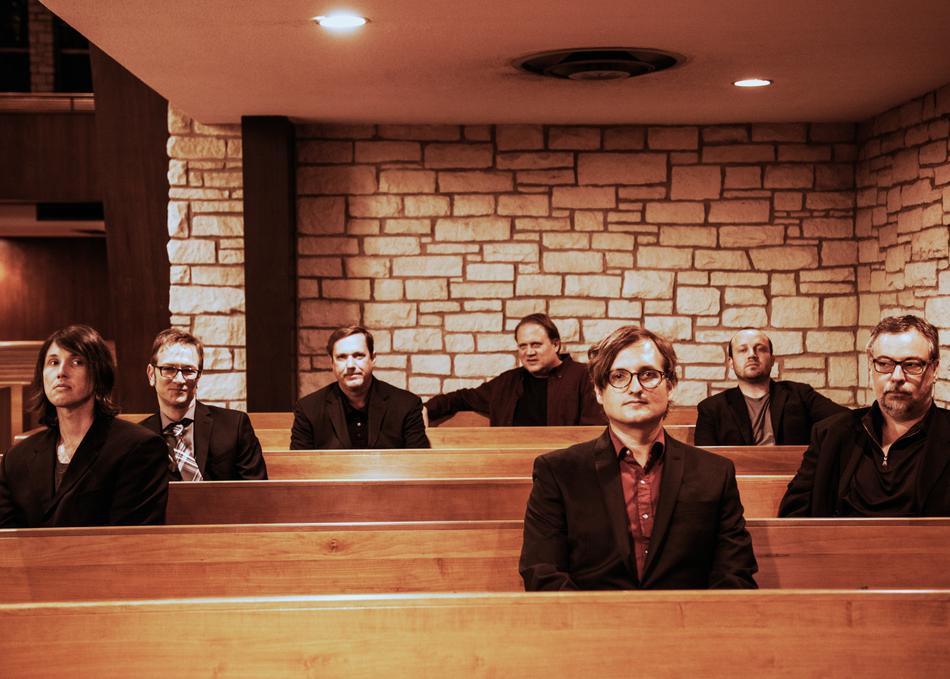 My Education released what was perhaps the most dramatic and heaviest LP of their career, A Drink for All My Friends, on Haute Magie in the USA on Nov. 6th 2012, and on Golden Antenna in Europe on March 7th 2013. The band promoted the LP with 19 very successful shows in 20 days in Europe in March and April 2013, including two festival slots as well as a good deal of southern US regional touring.

Few doubted the ascendancy of My Education to the first rank of American postrock bands after the success of Sunrise, their last album, composed of pieces from their original score for F.W. Murnau’s 1927 silent masterpiece “Sunrise: A Song of Two Humans”. The long-running Austin instrumental outfit perfected the Sunrise material with live film performances over the last few years that sold out shows across the USA and brought a number of audience members to tears.

Since forming in 1999, My Education has released 8 full-length albums, several singles, compilation appearances, and a 12" collaborative EP with avant-hip hop duo Dalek. Recordings have been remixed by members of bands Kinski, Pelican, the Red Sparowes and Dalek. Their previous albums include 5 Popes, Italian, Moody Dipper, and Bad Vibrations.

My Education have toured the US regularly since 2001; done regional tours with both Maserati and the Red Sparowes, and shared the stage with A Place to Bury Strangers, Kinski, Bardo Pond, Dalek, The Black Angels, The Sea and Cake, Warpaint, Alexander Hacke/Algis Kizys duo, the Psychedelic Furs, The Soundtrack of Our Lives, This Will Destroy You, Sleepy Sun, White Denim, Radar Bros., Eluvium, Sian Alice Group, Don Caballero, Trans Am and many others.

October 14th, 2014 saw the band's latest CD release, “Sound Mass II - Spiritual Docking”, on the largest independent label the band has been on to date, LA based Cleopatra Records. This CD is the newest in a series of collaborative recordings My Education has been working on with the Salt Lake City based improvisational outfit Theta Naught. The first Sound Mass record came out on CD in April 2011 on Differential Records. Sound Mass performances at SXSW and Austin Psych Fest were greeted with wild acclaim, and a Daytrotter Sound Mass session was released in July 2011. A vinyl version of the Sound Mass record was released in 2012 and was followed by tours of Texas and Utah as well as festival appearances at CMJ in New York, the Utah Arts Festival and SXSW in 2013. This record sees a tighter, more focused, composed and controlled sound from the ensemble and includes sessions the two bands recorded jointly in Utah as well as excerpts from a Daytrotter session recorded in Texas.

My Education loves collaboration and specializes in new media crosscurrents - work with Houston’s NobleMotion Dance company premiered with three sold out shows in June 2011 at the Austin Ballet and continued with a new effort, “With All Your Might”, which sold out two shows in September 2013 at Hobby Center in Houston. Also, the band has recently completed the score to a new film by CM Talkington, director of the cult classic “Love and a 45”, entitled “Mud Mules and Mountains”. The new film, which tells the story of the invasion of Italy by the raw recruits of the Texas 36th Infantry Division in 1943, premiered at the Telluride Film Festival in 2015 and is currently making the rounds of the film festival circuit.

On the vinyl front, a remastered edition of My Education's debut LP “5 Popes” was released to rave reviews from the blogosphere on Beat Imprint records in December of 2013. My Education has just finished a new album with producer Mike McCarthy (Spoon, Trail of Dead, Patty Griffin, etc.) at Public HiFi studios in Austin and is currently in the post-production process.