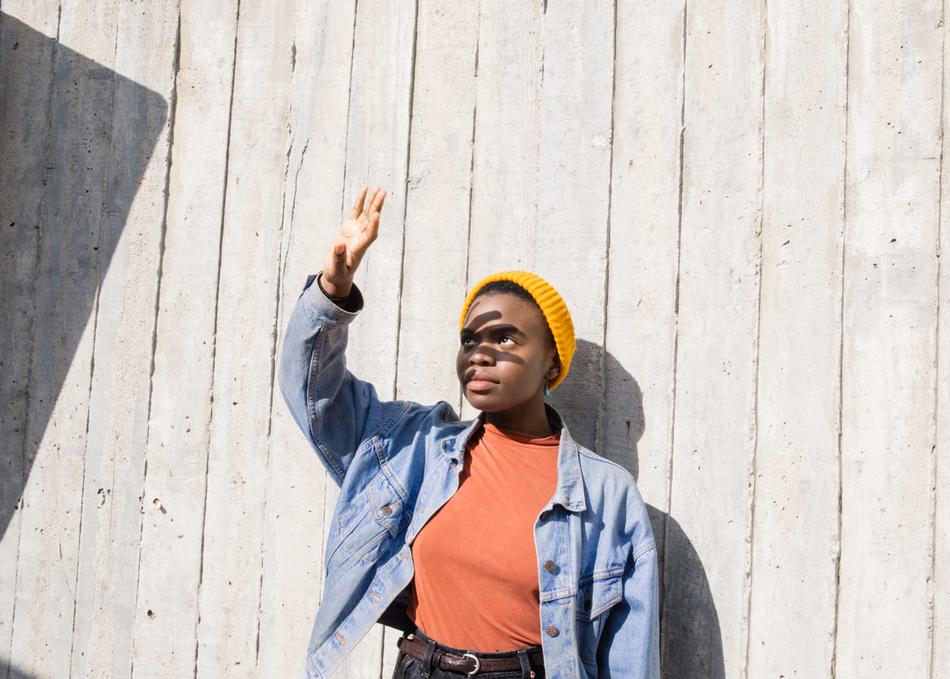 Within the songs of Laetitia Tamko there are infinite worlds: emotional spaces that grow wider with time, songs within songs that reveal themselves on each listen. Tamko is a multi-instrumentalist and a producer, recording since 2014 as Vagabon. On her forthcoming debut, Infinite Worlds, she hones her singular voice and vision with an unprecedented clarity.

“I feel so small / my feet can barely touch the floor / on the bus where everybody is tall,” she sings softly and with caution, as she begin the album with “The Embers.” Driving punk drums pry her song open, exploding it into an anthem that pushes back at entitled people who make others feel tiny. “I’m just a small fish / and you’re a shark that hates everything,” she sings, repeating that line and over and over with strength and power. “I've been hiding in the smallest space / I am dying to go / this is not my home,” Tamko starts carefully on “Fear & Force,” before her finger-picked guitar playing gives way to slow-building synth claps and ethereal harmonies. “Mal á L'aise” is one of the album’s focal points, a five-minute meditation of ambient dream pop, featuring Tamko’s usage of samples; some are samples from a Steve Sobs song on which Tamko was featured, enticing the one writing collaboration of the album. “Mal á L'aise” means “discomfort” in French, Tamko’s first language, and throughout the song she works through different meanings of that word: social, cultural, physical.

Infinite Worlds builds upon Tamko’s stripped-down demos that have been circulating online and throughout the independent music community for the past two years. Her Persian Garden cassette, released in 2014 via Miscreant Records, was a lo-fi collection where she embraced a first-thought best-thought approach, making songs that began with just her voice and guitar. But here, Tamko is a main performer of synths, keyboard, guitars, and drums, enlisting the work of session musicians at times. This had Tamko channeling the thoughtfulness of her lyricism into her arrangement and production as well. The result is a wide-ranging eight-song collection that’s pleasantly unclassifiable: hypnotic electronic collages, acoustic ballads, and bursts of bright punk sit side-by-side cohesively, all tied together by Tamko’s soaring voice.

“I write a lot about places, archiving my memories in spaces that I used to be in, spaces I am currently in, or spaces I will eventually be in” she says. “Archiving different moments that I’ve been thinking about, have gone through. It’s not always autobiographical though. It could be about different situations I’ve seen people I love in. Or people I don’t know in. I think that comes a lot from being in different environments. Like growing up in Cameroon. There, we are happy with very little. Then moving here and seeing how the culture differs from where I’m from.”

Tamko’s songs are embedded with her own story and personal history: growing up in Cameroon, her family’s move to New York and adjusting to culture shock. Her family left Cameroon just in time for her to begin high school in the states. She grew up around music and loved it, but finishing engineering school was a priority before music could start to feel like a real possibility. “When I was in Cameroon, my mom would have these ‘reunions’ which was just her friends coming over on Sundays,” she says. “There was a lot of music around me. Traditional West-African songs sung as group chants, hand drums and percussive instruments being played, etc.” To date, Tamko mostly listens to music from East and West Africa, styles of music that influence her in subtle ways.

Infinite Worlds was recorded at Salvation Recording Co. in New Paltz, NY with engineer and co-producer Chris Daly. Tamko and Daly worked closely and tirelessly in his upstate NY studio through the winter into the spring of 2016. The album’s title references a book of poetry by Dana Ward called The Crisis of Infinite Worlds, a book Tamko found particularly inspiring during her recording process, but also very challenging to read: “I had to think critically while reading Dana Ward, it was exciting to be challenged in that way. While I was writing the album, it was a lot of me thinking critically about how to actualize my ideas, and the challenge of reaching proficiency in new instruments. It sort of mirrored my experience reading Dana Ward’s book. I found myself combing his writing over and over and over until I grabbed something from it.”

And as she sat with her songs, she found more and more. “A lot of it is about finding a space for myself, whether it is physical, emotional, social” Tamko says. “It’s about finding that place where I feel most comfortable. And also finding that the confidence within myself can continue to grow. And finding what it takes for me to feel whole through making music.”