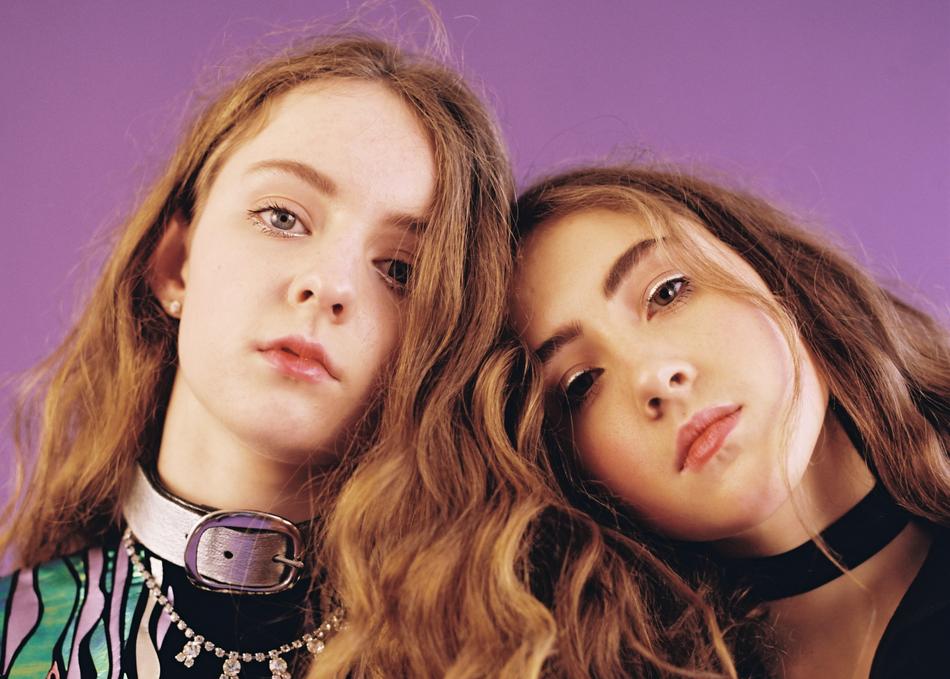 Everything is as easy as falling out of a tree for twisted feral-pop duo Let’s Eat Grandma.

Wildly imaginative multi-instrumentalists and talented putative pop stars Rosa and Jenny, both 17, met when they were four years old and have been inseparable ever since. They only started playing music together four years ago and since then they’ve been declared “the best band on Earth” by Kiran Leonard, recorded a session for BBC 6 Music, been played on BBC Radio 1, received praise from Richard Dawson, been written about by the NME, the Guardian and the Quietus not to mention playing live shows at The Forge, Cafe Oto and Festival No.6. This June sees them release their debut album, I, Gemini on Transgressive... and they only sat their GCSEs last year.

But if you ask them if any of this seems strange, they just laugh as if it’s the question itself that’s odd. As thick as thieves, as sharp as knives, as like-minded as twins, Rosa and Jenny met in the reception class of their local infant school in Norwich (the pair still live less than half a mile from each other) and their first love was making tree houses. Jenny explains: “We both loved Enid Blyton’s The Magic Faraway Tree and making a tree house is a symbol of being carefree when you’re young. We made them out of old pieces of wood in our back gardens and that was how we became friends. It was literally all we would think about.”

Rosa adds: “We got quite ambitious, making them with hammocks, rope-swings and a trapeze too. They got pretty big and extensive. We built one with a few different floors: a multi-storey treehouse. I used a hammer and nails that I took from my parents when they weren’t looking. I actually fell out of the treehouse once and cut my arm open. I’ve still got a scar there now.”

The pair of friends are aware that these wild constructions also symbolise their friendship, their creativity and a wish to escape into a private world away from everyone else; desires that are all now expressed through their music. Their bewitching album not only features an epic centrepiece track called ‘Welcome To The Treehouse (I & II)’ but a drawing of one of their huts graces the cover art as well. The sleeve (“it’s designed to sum up our imaginary world”) also features the constellation Gemini in the night sky and the album title refers to the star sign - despite neither of the girls believing in astrology. Rosa explains: “Gemini is the star sign for twins and we like playing on the idea that people are always saying we’re twins. The ‘I’ in I, Gemini sums up our twin like connection, but also describes us as one entity.”

Their entire aesthetic is constructed playfully from these contradictions, even down to their name. Let’s Eat Grandma was chosen in a rush the night before their first ever gig, from an old grammatical joke which highlights the usefulness of a well placed comma. The name is ideal for a band that can sound quite sweet and poppy on first listen but who also have deeper, darker undercurrents.

Jenny says: “As a band we like to play around with these pre­conceived ideas that people have about us. You know, as two young girls, they think we’re bound to be playing folky songs. But really we like really heavy bass and distortion!” “I think people will think they’ve got us pinned as these creepy, weird girls…” Rosa butts in, “but they’d better wait ‘til they hear Eat Shiitake Mushrooms, our next single!”

The band started in 2013 when Rosa was given a second hand acoustic guitar for her birthday and Jenny adopted a battered old ukulele. It was initially an excuse for them to strum and sing along to hits on the radio by the likes of Cee-Lo Green, Janelle Monae and Monsters And Men but they quickly got bored with this. Their first impulse when writing their own songs was to create what they felt they weren’t hearing on the radio. Influenced by playing jazz and classical music both in and out of school and their own desire to explode the pop formula, they started writing a series of uniquely structured compositions. (“I guess we were kind of making up our own rules as we went along. We took what we wanted from pop music but if we didn’t like it we edited it out or changed the structure.”) On a month by month basis their repertoire of instruments expanded and expanded to include the saxophone, the piano, mandolin, drums, synthesizers, harmonica, recorders and whistles despite the fact they didn’t even have an audience... they were only playing music to entertain each other.

But when they were offered a gig at the pub run by parents of a school friend, they saw how their music exerted a bewitching power over other people as well. After several landmark gigs - including one supporting Jane Weaver and Laetitia Sadier at London’s Cafe Oto - they started recording their debut album at the former nuclear bunker turned analog paradise, Old School Studios, Norwich, under the watchful eye of Will Twynham (Hand Of Glory records) who said: “It was the first time they’d ever been recorded, so it was a magical experience. I was really hands off – deliberately choosing to not take the usual studio route of grids and click tracks and rather respect the uniqueness of the situation, encouraging them to play everything live!”

‘Deep Six Textbook’ - the trailer single which has already caused a stir on the internet - refers to the old maritime phrase meaning to throw something overboard and sets out LEG’s desire to chuck the rulebook away. By their own standards the song is both lush and sepulchral and is intended to be the “calm before the storm” as the opening track. Future single ‘Eat Shiitake Mushrooms’ is an organ, synths and glockenspiel bass music banger (complete with rap breakdown) that concerns itself with people’s ability to surpass expectations and surprise everyone. ‘Chocolate Sludge Cake’ and ‘Chimpanzees In Canopies’ both relish in thrusting together seemingly incompatible genres such as R&B with cosmic synth psych; and stark minimalism with freak folk. They reclaim children’s fairy tales back from vacuous “Disneyfication” on ‘Rapunzel’, re-injecting the story with a dark sense of gothic unease. And ‘Sax In The City’ is a dystopian nightmare of people rendered robot slaves by smartphones and tablets - all the more striking for its jaunty lo-fi pop setting.

Let’s Eat Grandma have delivered a smashing debut LP at the age most people are still only just thinking about getting a band together. They say they hope it gets them invited to play on Later… With Jools Holland and a chance to play live in Japan. I’d imagine they’ll easily achieve this and much much more while still teenagers.