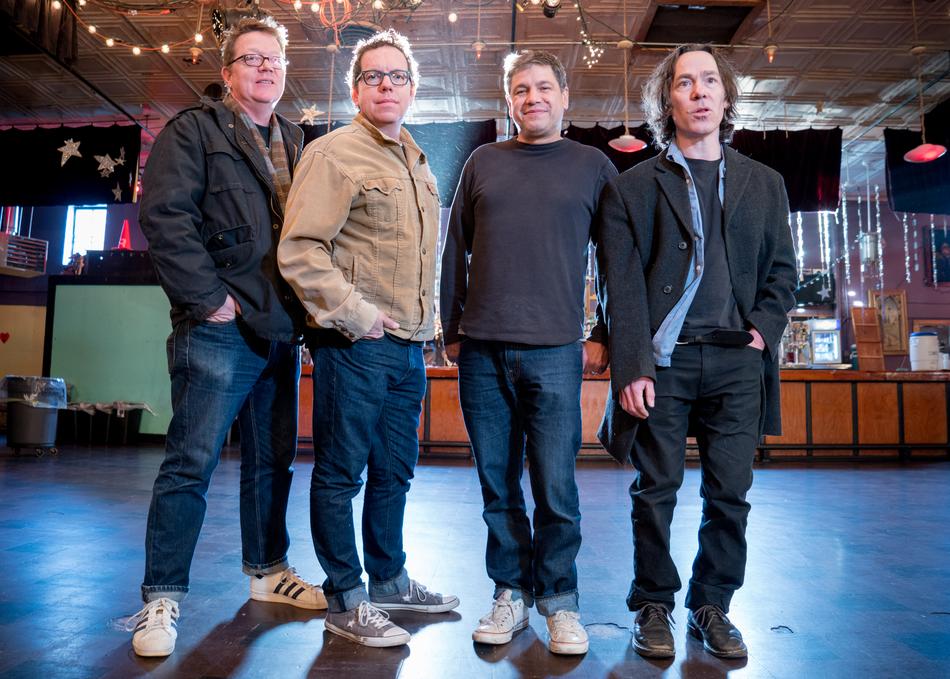 Five Eight is a four piece rock band from Athens, GA, though sometimes they were a three piece and sometimes as many as five people on-stage, depending on the weather and people’s medications.

The band’s roots go back many years, preceding the advent of Five-Eight by half a decade. The story begins in Hinman Dormitory on the campus of SUNY Binghamton in Upstate New York. The bottom floor of Hinman was populated by so many socially awkward and conversationally maladroit freshmen that the residents had been nicknamed “Jerry’s Kids” by the rest of the student body. Mike Mantione (guitar, vocals) was ambling down the hallway one afternoon when he peeked into a room and saw Dan Horowitz (bass, banjo) sitting on his bed and improvising a half-remembered version of a Ramones song on a battered, atonal acoustic guitar with a pencil for a bridge. “This is the guy,” Mantione apparently thought to himself, “that I want to play music with for thirty or so years.”

Mike and Dan eventually ended up with a handful of other exceptionally talented social misfits in the Binghamton band The Reasonable Men. The Reasonable Men went on to some local infamy as the party-rock band responsible for songs like “What The Fuck’s Wrong With My Brain?”, “Two Fat Ladies”, and “What I Imagined is a Movie by Me.” At the time, Mantione was lead guitar player and did not write songs. However, Mantione experienced a life-changing event when he had a nervous breakdown and was institutionalized for depression and psychosis. His family signed him out of the hospital against the advice of physicians and Mantione resolved to write his way through it. What followed was the first burst of songs like “Dawn of Son Melody,” “Streets of Fear,” and “Behind the Glass Wall”, all which would eventually become part of the Five-Eight repertoire.

The band had planned to move to Brooklyn as the members either graduated or dropped out of college. Dan Horowitz moved to the city and worked a part-time job while taking boxing lessons in Harlem. Mike went home to Long Island for what was supposed to be a few months, but entered a serious depression and never made it to the city. Dan Farnz, the band’s other principle songwriter, impulsively followed his brother to Athens, GA where his elder sibling was attending law school. He took all of the band’s equipment with him.

Dan Horowitz, Mike Mantione and then-drummer Mike Palmatier ended up following Farnz to Athens, ostensibly to get their equipment back, but eventually the whole band ended up living in the same small house that is shown in the movie ‘Athens, GA: Inside Out” as the one under which Dexter Romwebber lived (in the crawlspace). (Dexter had moved out, by then, of course.)

Dan Farnz left the band and the name was changed from The Reasonable Men to Five-Eight. Mike Palmatier eventually left the band as well. Local drummer Patrick Ferguson joined, first as a temporary replacement when Palmatier was greviously injured in a workplace accident at a lumber yard, then permanently when Palmatier moved back up north. The band put out two cassette-only releases (‘Passive-Aggressive’ and ‘Inflatable Sense of Self’) and began touring heavily in the Southeast with occasional trips to play in NYC.

Five-Eight’s furious live shows and growing regional following caught the attention of Sky Records, with whom they inked a deal in 1990. The band traveled to San Francisco to record ‘I Learned Shut-Up’ at Brilliant Studios with producer Norm Kerner (American Music Club, Angry Samoans). The record was released in 1992 and the band toured heavily behind it, playing over 200 shows before taking a week off to record the follow-up EP ‘The Angriest Man.’

In the weeks prior to recording sessions for ‘The Angriest Man,’ the band had been joined onstage by New Orleans guitarist Sean Dunn. Dunn, a member of the Atlanta band The Blood Poets, had befriended drummer Ferguson outside The Point, a nightclub in the Little Five Points neighborhood of Atlanta. Dunn suggested that he might jump up on stage with the band the next time they played Atlanta. Ferguson said he thought this might be a fun idea. Dunn then told Horowitz and Mantione that he was going to play a few songs with them at back-to-back shows in Athens and Atlanta. After the Atlanta show, Sean loaded his amplifier into Five-Eight’s van and joined them for a run down to Mississippi and Louisiana, telling each band member that the other band members had okayed this decision. At their sold-out show at Jimmy’s in New Orleans, drummer Fred LeBlanc (Dash Rip Rock, Cowboy Mouth) approached the band after the show, pointed at Sean and said “That guy stays. That worked.” It was about eighteen months later that the rest of the band realized that Sean had essentially conned his way into the band.

Five-Eight and Sky Records released ‘The Angriest Man’ in 1993 and ‘Weirdo’ in 1994, while the band played more than 200 shows a year, extensively touring the United States. Not long after the release of ‘Weirdo,’ Sky Records was acquired by Atlanta hip-hop label Ichiban. Relations between the band and the label went south fairly quickly.

In late 1994, the band left Ichiban/Sky and eventually signed to former Columbia President (and protagonist of the tell-all record industry expose “Hit Men”) Walter Yetnikoff’s Velvel Records. While on Velvel records, Five-Eight recorded ‘Gasolina,’ their most ambitious album yet, produced by Ed Stasium (Talking Heads, The Ramones, pretty much everybody, really). ‘Gasolina’ was released in 1997. Even with the stellar label pedigree and massive budget, ‘Gasolina’ unfortunately didn’t make a dime. The band continued on its relentless touring schedule until Ferguson announced he was burned out and bored with the whole thing and quit the band. Not long after, Dunn also left. Velvel declined to pick up the option on another Five-Eight record. For a brief moment, Five-Eight considered breaking up, then Mantione and Horowitz recruited fellow Binghamtonian Mike Rizzi to play drums.

It was in the wake of this crushing series of disappointments and disillusionments that Five-Eight wrote what is largely believed to be their most artistically complete and realized album, ‘The Good Nurse'(2000). With his marriage in tatters, his band nearly broken up, close friend and fellow songwriter Graham King undergoing treatment for Hodgkin’s Lymphoma, Mantione wrote a searing and gorgeous conceptual album about illness, hospitals, dying, and broken families. It was celebrated by NPR, Spin Magazine and Alternative Press as Five-Eight’s greatest work.

Five-Eight soldiered on, continuing to tour and write, releasing the self-titled album ‘Five-Eight’ in 2004. Five-Eight refers to the self-titled album as “The Black Album” (a conscious reference to the movie ‘Spinal Tap’), several tracks of which got heavy airplay on the Atlanta Alt-Rock powerhouse station 99X. It was in support of The Black Album that Five-Eight opened for REM on their US tour. It looked for a moment like Five-Eight might finally break through to widespread commercial success.

In 2007, Rizzi accepted an offer to join The Ghost Hounds, an LA band with a growing cult following, often joined onstage by Slash and other Los Angeles rock royalty. With Rizzi relocated to Los Angeles, the band approached Ferguson to play drums again. Ferguson joined “for a few shows” and remains with the band to this day. Together, they made a new album (Your God Is Dead to Me Now, 2011), with Ferguson recording and producing all the tracks. It was during the recording of this record that Sean Dunn moved back to Athens to rejoin the band. The album ‘ended up being one of the band’s favorites and was mentioned favorably by NPR’s ‘All Songs Considered’, as well as by several influential music blogs.

Since the release of Your God is Dead to Me Now, the band has continued to pump out its famously furious live show 20-30 times a year throughout the American Southeast and Midwest, and in late 2013 began discussing the idea of re-releasing its classic Weirdo album. The sonic problems with the original record have been well documented by the band and producer David Barbe, and can be summarized in a footnote by saying that many A&R men in those days were focused on making hyped, over-processed records in an attempt to sound like Nirvana, and the band (and Barbe) wanted and recorded a much different record. Ultimately the A&R man with the label won out and added effects to the mixes similar to a loudness button on a boom box, creating a tinny high, a hollowed out bottom, and an overall sound that lacked the depth of the live (and studio sound) of Five Eight.

Having found the original tapes for Weirdo and energized by the enthusiasm of their current manager Doug Rasmussen, the band began reaching out to record labels and friends and found a highly supportive home in Austin TX based Chicken Ranch Records, whose owner Mike Dickinson, is a longtime fan of the band. The band hired David Barbe and began working on remixing and remastering Weirdo in 2014. Complete with new artwork and 5 unreleased tracks not found on the original Weirdo, Weirdo 2015 was released to high critical acclaim in July 2015. The band appeared in an official SXSW showcase for Chicken Ranch Records in March of 2015 to start its Weirdo re-release tour, and followed its 3 SXSW appearances with shows in New Orleans LA and Pensacola FL.

The band continued to tour the balance of 2015 in support of the Weirdo re-release, making additional stops in Athens GA, Atlanta GA, Oxford MS, St. Louis MO, Augusta GA, and Valdosta GA, and culminated the Weirdo tour with an epic live performance in February 2016 at the Forty Watt in Athens GA–sharing the bill with Centro-matic’s Will Johnson and the Drive By Truckers.

Since February the band has been back in the studio and is near completion on its new album, tentatively entitled “Songs for Saint Jude.” (Saint Jude is the patron saint of lost causes and also figures prominently in the prayers and iconography of Dunn’s hometown of New Orleans.) They are working with producer and Athens based drummer Mike Albanese (Bit Brigade, Maserati, Cinemechanica). The band is also working with Atlanta GA based filmmaker Marc Pilvinsky on a full-length documentary of their now 27-year career as one of the world’s least famous (but extremely popular to those in the know) accidental cult bands to ever come out of Athens GA.