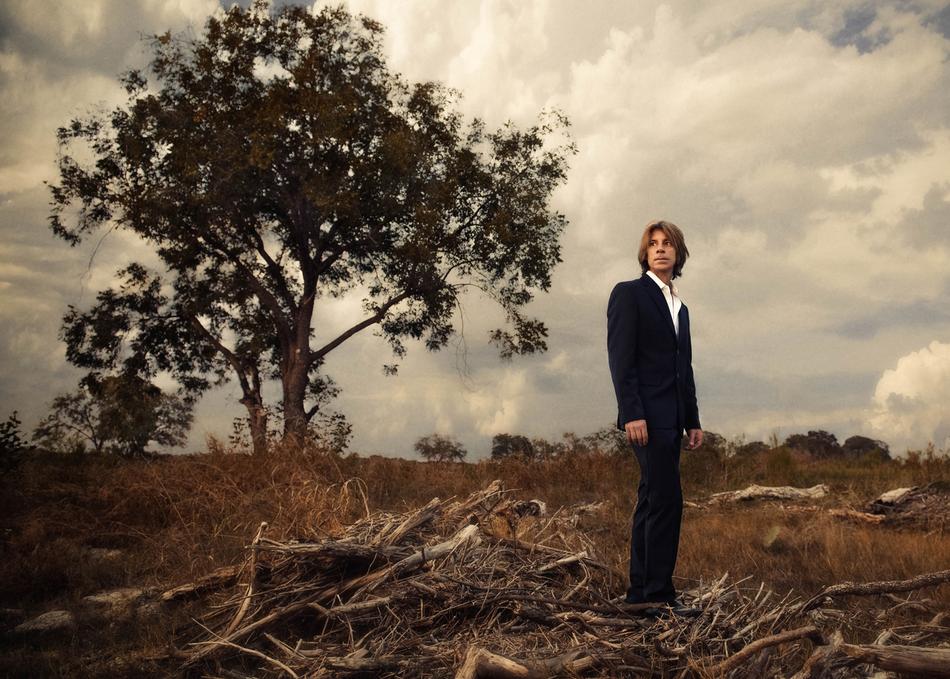 Cotton Mather - Close To The Sun

It didn’t take 15 years for Cotton Mather’s Austin-based main man, Robert Harrison to write the 64 songs (64 songs!) that comprise his latest musical vision, one song for each hexagram (or reading) of the I Ching, that’s actually the amount of time that has passed since the last full-length album of new Cotton Mather songs was released. With so much new material on deck, it seems like Harrison is making up the difference.

As of early June 2016, half a dozen tracks from this treasure trove of new tunes have already been posted one-by-one in “real time and real weather” as Harrison describes this creative process, and now the first of an eventual four albums that will ultimately contain much of the entire song cycle, has been announced. Arriving on July 29th, the eleven-track Death of The Cool contains another nine of Harrison’s pure pop meditations on Chinese philosophy, along with the two currently available tracks that initially announced the project – “The Book of Too Late Changes” (based on I Ching hexagram #24: The Return) and “Child Bride” (based on #4: Youthful Folly.)

15 songs deep into revealing such an ambitious undertaking to the public, Harrison reflects, “These are my reactions in song to illuminations from the I Ching about life unfolding. Some of the songs directly reference the text and others use the readings as a starting point. Until I started this project, it had never before occurred to me to seek counsel with respect to songwriting, but after I turned to the I Ching for artistic guidance on several occasions with nice results, I thought ‘Why not go for the whole cycle?’”

Harrison’s commentaries about each of the songs can be found at the website for the project, ichingsongs.com. In addition to “The Book of Too Late Changes” and “Child Bride,” Harrison has already posted four more tracks unavailable on Death of The Cool including “Hijinx Dad” (based on I Ching hexagram #56: The Wanderer), “King William” (based on #37: The Household), “The Army” (based on #7: The Army), and “The Cotton Mather Pledge” (based on #13: Fellowship With Men.)

“Each song’s commentary at ichingsongs.com reflects how a translator traditionally shares thoughts on the reading,” Harrison says. “However, I will limit my commentary to the readings themselves, and let the songs enjoy a free-range lifestyle.”

The next track that can enjoy itself as we enjoy it is “Life of The Liar” (based on I Ching hexagram #6: Contention), the first single from Death of The Cool.

“I remember picking up my son after his first day of first grade,” Harrison says, explaining the meaning. “When I asked him how it was, he chirped, ‘Awesome, Daddy! I already have an arch enemy!’ This is good news, I thought? As if creating and choosing to see one’s photo-negative in the other somehow validates and empowers our imagined sense of who we are? I’m truly at a place in my life where I’d like to be done with that.”

For anyone thinking that 64 songs written around a single theme can’t possibly maintain a standard of quality, welcome to the unlikely world of Cotton Mather. Founded by Robert Harrison in Austin in the early 1990’s, the band initially had an experimental sound, but soon evolved into a guitar-driven pop group defined by accessible melodies, strong vocal harmonies and lyrical wit. Cotton Mather released its debut album Cotton Is King in 1994, but it was the follow-up album Kontiki, famously recorded on four-track cassette, that drew praise from critics and rock-stars alike.

Uncut Magazine gave Kontiki five stars calling the record “music to smile yourself to death to.” Mojo said the songs were “brought to life with daring vitality,” and in its own five-star review, The Guardian called Kontiki “a bewildering, dizzy thrill.” It wasn’t just the press either. Oasis brothers Noel and Liam Gallagher fell in love with Kontiki soon after discovering it. When Noel was asked “What are you listening to these days?” in the pages of Mojo, he answered, “Cotton Mather,” and went on to say, “I thought if that isn’t the best record I’ve heard in ten years, then I don’t know what is.” Brother Liam left his praise for the album in the pages of GQ, admitting “I fucking wish it was ours! I play it all day at home.”

On our shores, the bounce back of influence from across the pond was finally felt with Britt Daniel of Spoon being just one artist to say “Kontiki gave me something to shoot for.” In addition to the deluxe reissue of Kontiki on Valentine’s Day, 2012, Cotton Mather reunited that year for a special performance of full album at South By Southwest, marking the first time in a decade since the band last performed together. In the years since Cotton Mather went on hiatus, Harrison stayed busy producing other artists, in addition to forming and fronting a new band, Future Clouds and Radar which was acknowledged for its “sprawling orchestral pop” by the New Yorker and named “Debut Artist of The Year” by