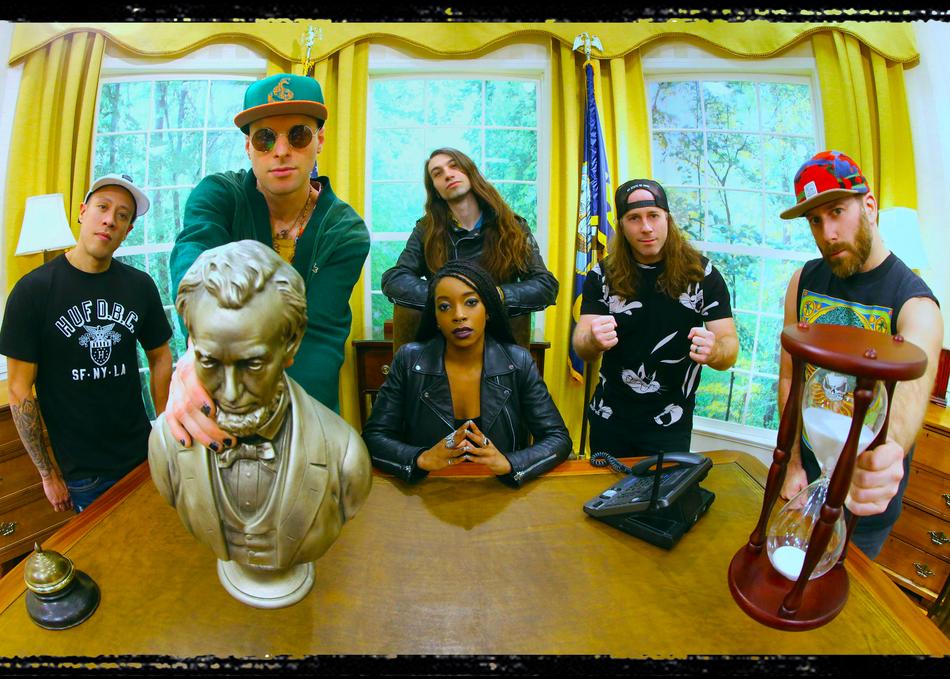 Shinobi Ninja is a genre-twisting band with an explosive live show from Brooklyn, NY. Formed in 2008 by friends and colleagues, the group’s six diverse characters create a unique sound as they mash-up Pop, Hip-Hop, Metal and Punk. With their music and DIY ethic, they’ve since developed into a national rock act with a grassroots following built from non-stop touring, recording and social networking.

Before the band, each member had respective careers in the music industry. Vocalist, Duke Sims., had been a busy NYC musician, producer, and engineer at Progressive Studios. Vocalist, Baby G, who worked as a singer and dancer for major label artists like Rihanna, Diddy, Cassie, and Santigold, was a fixture in the vocal master class held at Progressive by esteemed vocalist, Craig Derry of the Sugarhill Gang. Twin brothers- guitarist, Maniak Mike and, drummer, Terminator Dave ran The Sound Machine, a recording studio where they produced their projects and other artists. Alien Lex worked as an engineer at the Sound Machine. DJ Axis, an accomplished battle and club DJ, played in bands with Mike and Dave. After two years of making a living together at Progressive Studios and The Sound Machine, this group of eclectic musicians decided to combine influences and formed Shinobi Ninja in March 2008.

In 2010, after a year and a half of playing live and recording in New York, the band released “Shinobi Ninja Attacks”; a first of its kind video game album app that rewarded users with a soundtrack download after winning or checking-in via GPS at a live show. Selling over 15K copies on the iTunes store, the project’s success spawned the album app generation, launched Shinobi into the blogosphere, and to the east and west coasts on national tours.

With the momentum of the app’s success and two years of touring under their belt, the band released its first album, “Rock Hood”, in June 2011 to critical acclaim. The album’s single "Rock Hood", was featured in the popular video game NBA 2K12, which sold over 5.5 million copies worldwide. 2012 included national touring, headline sets at SXSW, Warped Tour and CMJ, and the band’s first two adds to MTV and MTVU with videos for their singles, "Rock Hood", and, "Slow Mourning" .

In June 2013, following months working at their NYC studio, The Sound Machine, Shinobi Ninja began releasing singles and touring in support of their double album, “Escape From New York / Return From…”. Through hard work on the road, the band scored national exposure with interviews on Fuse TV and with "Amped To 12”, a song written exclusively as the theme to Marlon Wayans' feature film, A Haunted House 2. On their national summer tour in 2014, “EFNY” became a Top 10 add on CMJ’s radio charts with singles that reached #1 in many cities. By the end of the year, the band had self-produced a music video for every song on EFNY, released the albums “Return From...”, and “The Monster Van Album” (sponsored by Monster Products), opened for Linkin Park and Fishbone, played CMJ, and headlined the Lackawanna Music Festival. In January 2015 they released a freestyle album, “Artistic Visions”, and in February were featured in the second season of Comedy Central’s Broad City. While touring nationally through the summer and fall, the band wrote and recorded new music and released the two song MAXI Single “FUNBANG” November 21st in Brooklyn.

Shinobi Ninja’s fiery, independent path is no different in 2017 with their new album Bless Up to be released, festivals in the summer and a completed new album.