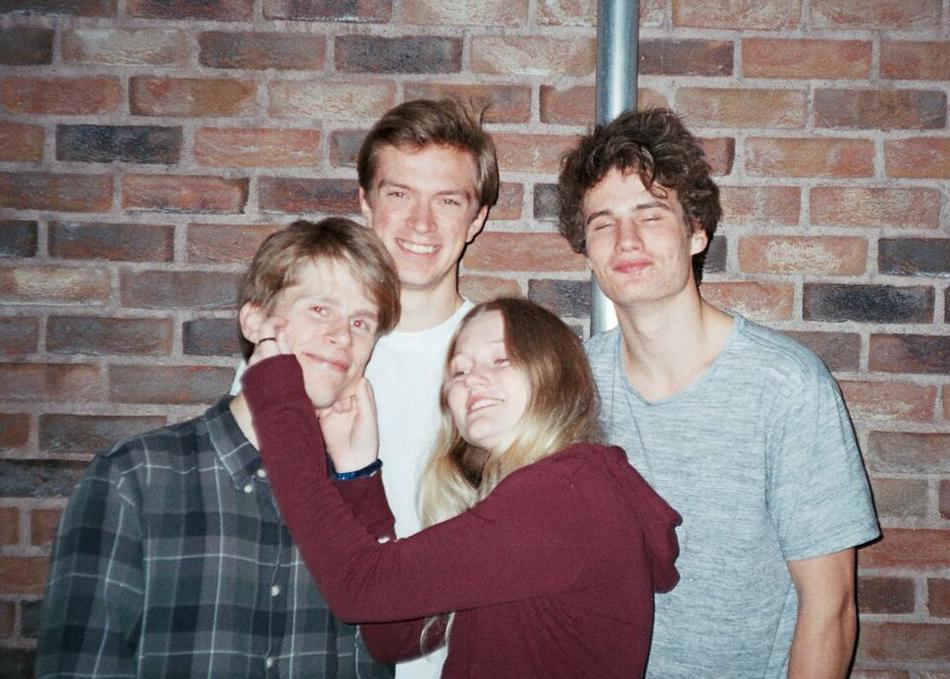 It hasn't taken long for Norway's Sløtface to set the agenda. Every opportunity they get, the fire-starting four piece bring fearlessness and defiance to the table, fusing a pop-punk aesthetic with something new. It begins with the name turning heads, but the songs go several steps further. We're looking at a band here to stay.

Formed in 2012, the group started when vocalist Haley Shea and guitarist Tor-Arne Vikingstad began writing songs together, some of which form the singles they'll be releasing in 2016. Tor-Arne previously played with drummer Halvard Skeie Wiencke in a hardcore band. The latter took some convincing to join Sløtface, but "he enjoyed it -- so he continued playing!"

Chances are Halvard spotted something different with Sløtface, completed by bassist Lasse Lokøy. This wasn't just another band. With every move they make, they look to spin conventions on their head. Haley fronts forceful, firework-spitting punk with the confidence of someone several records in. In fact, everything these four sport is schooled in a swagger that you can't teach. "We love good pop songs, so we always try to write them," stats Tor-Arne. "We don't like droney, seven-minute songs. We'd rather listen to Robyn than prog.

"It' s this ethos that sums up Sløtface. On the one hand, they're a band intending to shake up the norm. Haley writes about "apathy," "the way teenagers are supposed to act," and most of all, the female perspective. "We're trying to portray a character that's often female but not maybe the way you'd expect females to be portrayed in popular culture," she says. "A lot of our songs are about that. Every love song we've ever written is in some sense a twist on your expectation of what a break-up song would be like. Defiance would be a good way to sum it up.

"We deserve to hear voices from different identities. That's owed to us. I write from a female perspective because I feel like women's voices are underrepresented in general. Especially women angry about things. And I think it's ok to be angry about things.

"Part and parcel of the "anger" is an all-inclusive excitement. Everybody can be part of the Sløtface club, screaming at the top of their lungs. These songs are universal, fuelled by frustration by ready to be embraced by thousands. It' s no surprise they've swiftly jet-setted out of Norway. Buzzy UK shows at London's The Old Blue Last cemented their reputation as an all-thrills force. It took just a couple of gigs for stage invasions to become a certainty. Next, the universe. "I can remember at By:Larm, they had this article about the major artists just being electronic, that guitar rock was dying," remembers Tor-Arne, noting the relative scarcity of guitar acts in his home country. "Metal and hardcore rock are a big deal in Norway, but it's still niche. Radio in Norway is very electronically focused," adds Haley. "That's the norm, that's what's played on the radio. We see rock bands and rock bands sell out shows. But it's not top twenty on the radio or anything."

Funnily enough, Sløtface would be right to have top twenty ambitions. Sure, radio presenters won't be able to say their name on daytime, but there's no denying the instant fix of 'Kill'Em With Kindness' or 'Shave My Head''s rallying cry. "It took a while in Norway for people to think of us as something you could play on the radio. People didn't automatically assume a band called Sløtface with punky vibes would be played on the radio. They were surprised that people liked it. But in the UK, it was a lot more instant. All of the UK bands plugged over there -- every time we talk about a band in the UK, it's a female-fronted, lo-fi, garage rock band that we really like. In the UK, it didn't feel like an effort," enthuses Haley.

A debut album -- due out in early 2017 -- is already taking shape, although it's in its very initial stages. Early sessions took place in November 2015 at the isolated Ocean Sound studios, Norway. If Sløtface ever needed a catalyst in providing more fuel to their fire, a window's view of the violent North Sea ("crazy waves, crashing all the time") did exactly that. "We're still working out what we want to put on there," admits Haley. "We want to show people a little bit more. We want to be a band that reinvents itself." Across the singles released so far, the group already showcase intent to switch things up when they please. Don't expect reinvention to be limited between albums. A dozen different sides of Sløtface could be exposed across this debut.