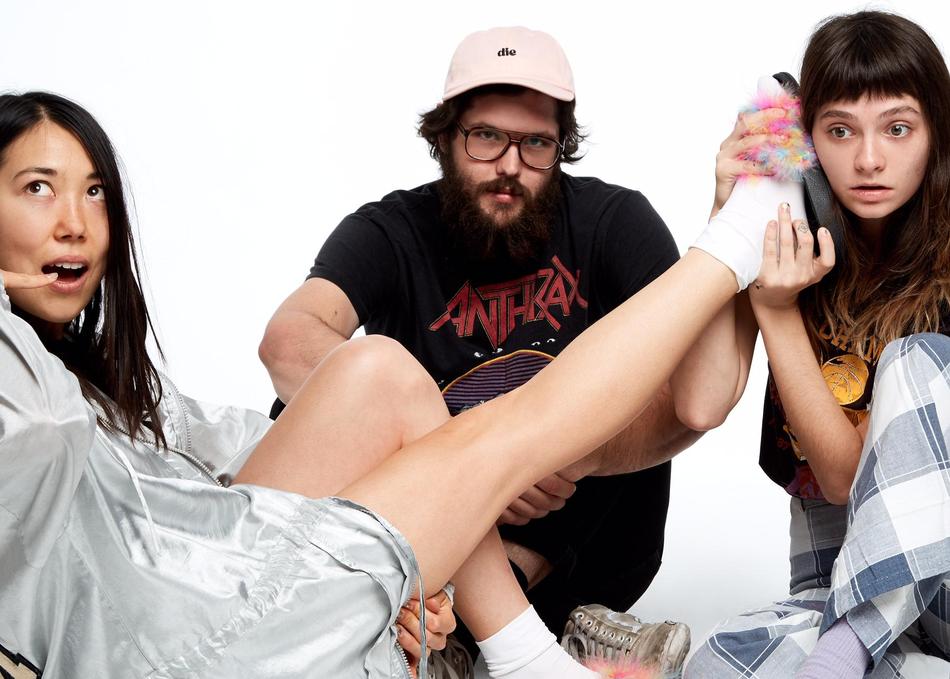 Society would deem that a prodigious girl can't be in a progressive rock band while also being in complete control of its creative vision, business plan and social messaging. Society is wrong. Clem, a 19 year old teen Queen with a headstrong resolve like her hero Patti Smith and a cartoon laugh like Muttley the dog, dreamed up Cherry Glazerr in her LA bedroom alone and is perhaps more capable of figuring a music career out than anyone who attempts this treacherous life path. And yet, she carries herself very lightly. “This one's going to be a flop!” she jokes, here to discuss the newly lined-up trio's second album, Apocalipstick. It's every bit as epic, funny, life-assuring, doom-defiant and flaming fire as that title sounds. What's more, it's the soundtrack to their collective rockstar evolution.

Today things look a little different from the band’s early days back in 2014 when they were associated with much-loved Cali imprint Burger Records (who put out their intoxicating debut Haxel Princess) and Suicide Squeeze (who released the Had Ten Dollaz 7-inch). Back then, they were born as a different trio, featuring Hannah Uribe and Sean Redman who have since both moved onto other artistic pursuits.

Now bolstering Clem's vision is the loud-in-every-way-possible drummer Tabor Allen and the level-headed but bad-ass, multi-instrumentalist Sasami Ashworth who plays synths and notably French Horn (Clem is still scheming on how to incorporate that into Cherry Glazerr's sound). The first time the new trio all jammed together minds were blown. “My world was rocked,” recalls Clem. “I'd never played with someone who was technically that good before. It made me think, Man I gotta really step my shit up!”

On Apocalipstick the band worked with “rock'n'roll wizard” Joe Chicarelli [White Stripes, The Shins, The Strokes] and Carlos de la Garza [Bleached, M83, Tegan and Sara]. Understandably the band felt a sense of vulnerability when laying themselves bare to Joe, a producer they had so much respect for. Dispelling her own sense of ego was an added hurdle for Clem, but it allowed for their greatest risk-taking as a band yet and has paid off exponentially. “I didn't even smoke weed during pre-production because I didn't wanna disappoint Joe. I didn't wanna get in trouble!” laughs Clem. She adds, “Making a record is such a spiritual thing. You laugh, you cry, you're miserable and the happiest you'll ever be.” Tabor chimes in with typically comedy drummer timing, “It was so much simpler than that for me. Just, 'These drums sound sick.”

The band's newfound self-discipline and motivation has evolved Cherry Glazerr into a wildly complex, hugely guitar heavy, and unapologetically loud machine. “People may be shocked by the jump in our sound,” says Sasami, eager to establish that this record isn't intended to be some fancy statement about reaching their pinnacle. It was simply an opportunity they couldn't turn down. Clem has since learned how to quit focusing her attention on the fans or wider critical response. “There was a time when I just couldn't write songs because of that. You can't do that,” she says. “You can't be emotionally free if you're pandering to anyone. Serving the music is the one and only thing that matters.” That's hard when you have people telling you what to do all the time.

The subject of equality among the sexes, however, holds a special, unavoidable place for Clem, torchbearer for feminism in its raddest forms. That's so key to her aesthetic that it's the opening sentiment of Apocalipstick via the anthemic, disaster-laden 'Told You I'd Be With The Guys'. The song documents Clem's realization that she needed to establish solidarity with other women and stop being a “lone wolf”. “Sexism is so ingrained in me, I can often feel that men are the only ones who can help me socially, economically. The most important thing in my life is that I've realized I need to work for solidarity. That song's both hopeful and dismal!” she laughs. Clem still feels the constant need to prove herself. “Women work from behind their oppression. In order to make good art you need to be emotionally free and sadly, not a lot of women are able to do that. That always puts a fire under my ass.”