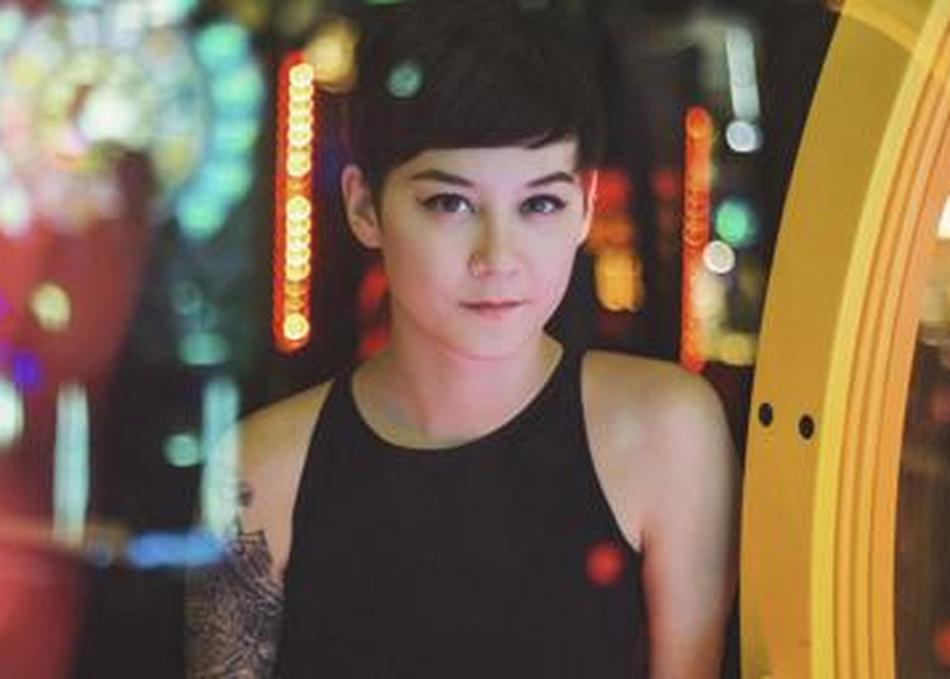 On Psychopomp, the debut full-length for Japanese Breakfast, Michelle Zauner romanticizes need, knowing precisely how futile it can be, as she howls on the record's final song, to "cling to your sleeves 'til they're like lacerated sails." She drew from the masters of the form—Dolly Parton, Tammy Wynette, Loretta Lynn—for "the way they sing with over-exaggerated longing, wail on the inability to go on without someone." Originally, recorded as a straight forward rock record, indebted to country and folk lineages, Michelle co-produced Psychopomp with Ned Eisenberg to give it what she calls "a psychotic pop sound."

"Psychotic" doesn't feel quite like the right word. Psychopomp is by no means unhinged, but it unspools with an otherworldly rush—it's sky-sized dream-pop with substance, moving from the gorgeous euphoric rush of "In Heaven" through the pinwheeling "Rugged Country" and "Everybody Wants to Love You," into the painful longing of "Jane Cum" and "Heft," and the relief of "Triple 7". Imagine Bat for Lashes or Tango in the Night-era Christine McVie working in the New York indie-pop scene populated by the likes of Frankie Cosmos and Porches; it's a far cry from Michelle's previous band, Little Big League, who released two brilliant (but underrated) albums of complex, knotty indie rock.

"With that band, there was more of a desire to be tough," she says. "I really liked the idea of playing in a rock band, and I was playing with three dudes that grew up on punk and hardcore, then you had me and my Pacific Northwest indie-rock background, like Death Cab for Cutie, Built to Spill. I was like, I can charge it up, this is really fun." When it came to Psychopomp, she chose to embrace the natural briskness of her writing; not overthinking things, and embracing the pop music she loved as a kid.

For a while, Japanese Breakfast and Little Big League coexisted. Michelle released her first tape under the name in 2013: June was a writing exercise where she wrote a song a day for the month of June, the kind of process that informs much of her music. "That was such a helpful thing for me," she says. "I needed some kind of structure to learn how to manage art as work. You can't sit around waiting for it to happen — you need to figure out how you're going to work it. For me, it has nothing to do with a long process – it starts really manically. There was another night where I took a bunch of Adderall and I wanted to write a whole album in 24 hours. After that I went to a trailer in the woods with a couple of friends, and we tried to write an album in 48 hours."

That’s how much of Psychopomp started out, with 4 now revamped tracks appearing on previously available Japanese Breakfast releases June, Where is My Great Big Feeling and American Sound, all of which Michelle released to Bandcamp in summer 2014. About that time, Michelle’s mother was diagnosed with cancer, and she had to leave Little Big League behind to care for her in Oregon. The illness was brief and unsparing. Two weeks before she died, Michelle married her husband Peter, "because I didn't want things to end that way," she wrote in a beautiful contemplation of her 2014 for the website Heartbreaking Bravery. "I wanted it to end with flowers and macaroons and my mom watching her only kid get married."

After her mum passed away, Michelle stayed on the west coast to help her dad. The family had always lived out in the woods of Eugene, Oregon—the same place that Sufjan Stevens' Carrie and Lowell is based, "which sounds kind of like the landscape," says Michelle. "It's very quiet and grey and grainy, but also beautiful and majestic." With time on her hands, she wrote a few new songs, and culled from the archives of her writing exercises to find older material to update. She wrote "Rugged Country," about becoming the person who had to love and nurture her father after he had lost the woman who had been in his life for 32 years: "It's a heavy hand where I wear your death as a wedding ring in the rugged country," she sings—two weeks after her wedding, she started wearing her mother's wedding band.

"In Heaven" too was written in the wake of her death, and the ensuing assurances that she was "in a better place now," Michelle recalls. "Oh do you believe in heaven like you believed in me?" she sings, a light beam surrounded by strings and sparkle. Unable to believe in the afterlife, the commonplace consolations of loss frustrated her, and she began investigating other frameworks to deal with her grief. In an essay by Carl Jung, she stumbled across the word 'psychopomp', a mythological guide to the afterlife who forgoes judgement on the life of its charge. The figure echoed the role she felt she had played in her parents' lives: not judging her mum when she decided to end chemotherapy after only two sessions, having seen her own sister endure dozens of treatments that ultimately proved unsuccessful. (That's a photo of her mother on Psychopomp's cover.) "I was there to su