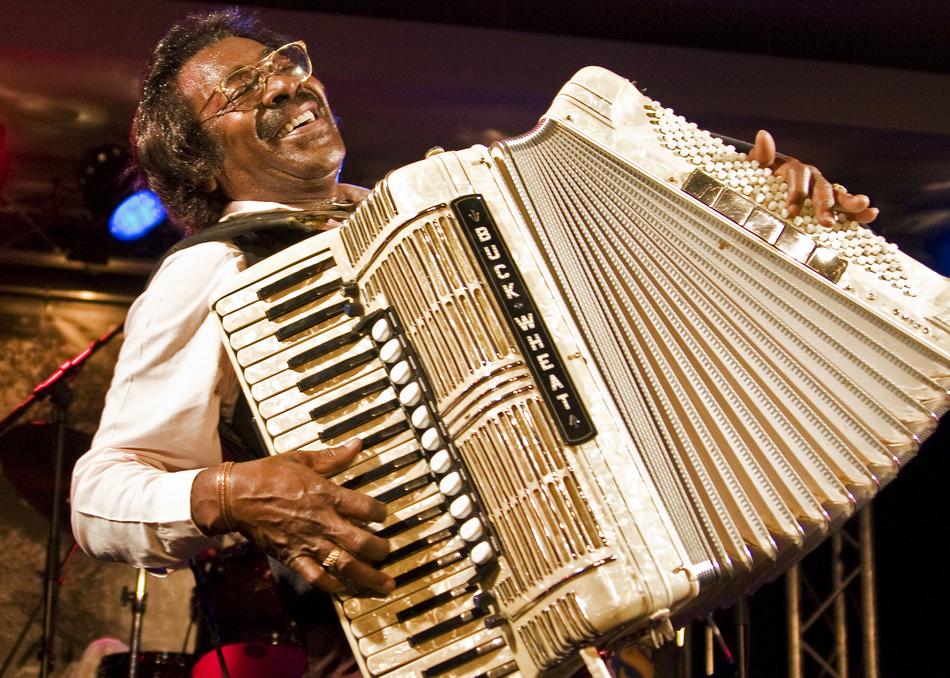 If you’ve gotten into zydeco music, or felt its influence, or watched the world celebrate this great aspect of Louisiana culture over the past 30+ years it’s likely been because of Buckwheat Zydeco. Many millions witnessed the excitement when Jimmy Fallon chose him to open the final episode of Late Night with Jimmy Fallon: The show opened “cold” with a tight close up of Buck’s accordion, then – joined by Fallon on guitar and backed by the Roots – they kicked off a rousing rendition of “On A Night Like This.”

That song was the title track of Buckwheat Zydeco’s groundbreaking first Island Records album and was responsible for bringing the unique sound of zydeco into the musical mainstream in 1987. It was also the first major label zydeco record, and a Grammy nominee. No other zydeco artist has come close to selling as many records or exposing the music to more people around the world. The band claims the three largest selling zydeco albums of all time.

Moving in yet another new direction for zydeco music, Buckwheat Zydeco is featured on their own YouTube channel, Buckwheat’s World. The series showcases musical performances, and present slices-of-life footage of Buck, the band and friends doing what they do in everyday life in Southwest Louisiana. Buckwheat’s World is helmed by Peabody-Award-winning film makers Louis Alvarez and Andrew Kolker, and longtime collaborator, Ted Fox.

In 2014, Buckwheat Zydeco was named the honoree at the Annual New Orleans Jazz & Heritage Festival and Foundation Gala. Past headliners at this event have included Willie Nelson, Ray Charles, B. B. King, Fats Domino, Smokey Robinson, Bonnie Raitt, Dr. John, and Little Richard. "Zydeco and All That Jazz: A Lifetime Tribute to Buckwheat Zydeco," also boasts an array of zydeco stars including Terrance Simien, C.J. Chenier, Nathan Williams, Rockin' Dopsie Jr., Rosie Ledet and Li'l Buck Sinegal paying tribute to the honoree. In 2013 Buck graced The New Orleans Jazz and Heritage Festival’s 2013 Congo Square Poster – Buckwheat’s Zydeco: A Congo Square Tribute to the Spirit of Southwest Louisiana. Over the years, the Congo Square Posters have become highly sought after collectibles.

Stanley “Buckwheat” Dural, Jr. passed away September 24, 2016. This show is a tribute to he and his music.