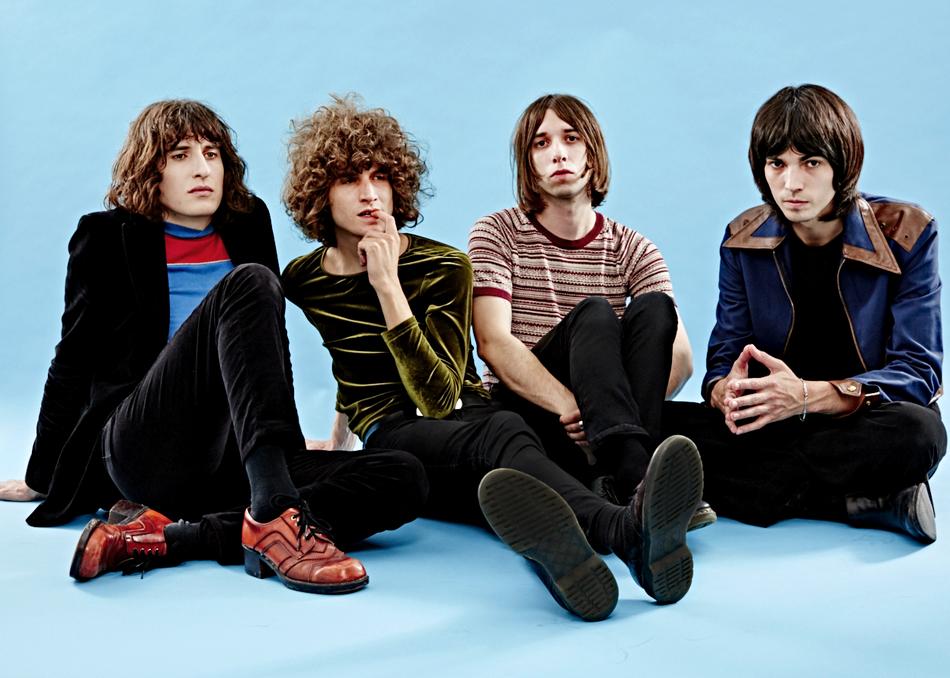 It doesn’t take too long with Temples’ second album Volcano to realise that a noticeable evolution has taken place, whilst still keeping intact all the things you loved about the band’s debut, Sun Structures. It’s there from the outset: the beefed-up beats of Certainty reveal an expanded sonic firmament, one in which bright synth hooks and insistent choruses circle around each other over chord sequences that strike just the right balance between nice and queasy. Shock-haired singer James says, “If there’s a sense of scale, it was really just a result of implementing a load of things that we didn’t know about the first time around.” Referring back to Sun Structures, a record that was recorded in his house in his native Kettering, James explains, “We didn’t even have a subwoofer to listen back to things that we did on Sun Structures, so there was nothing below 50Hz on Sun Structures. We didn’t even know those frequencies were there!” Co-founding member and bassist Thomas Warmsley describes a record in which “we discovered a lot as we went along, and the excitement at having done so radiates outwards.”

It’s a point perhaps most emphatically born out by Mystery Of Pop and Roman God-Like Man. Both songs make light work of reminding you where Temples have come from and how far they’ve travelled. On the former, Sam Toms’ brittle, piledriving rhythm clears the path for a breathless baroque pop reverie where synth and mellotron interweave to beguiling effect. “I just started with one idea. I wanted something that sounded like it was on the edge of being too fast and like you couldn’t keep up with it,” explains James. Similarly, Roman God-Like Man, in all its pulsating neurotic grandeur, spidered out from a single thought: “It’s about the pernicious effect of narcissism,” explains its creator Thomas, “But written from the perspective of someone who works in a world where that’s sort of encouraged.”

Having produced the first album themselves, Temples saw no reason to enlist outside help for their second album. “If you’re an artist who doesn’t necessarily know what they’re looking for, I can see that having a producer might be necessary, but that isn’t us.” In fact, ideas for the record were forming and being performed by the last summer. One case in point was the song which inspired the record’s name. Far more immediate that you would ever expect from a song with such an odd time signature, Oh My Saviour was written in Japan, where Temples enjoy an enormous following – to be specific at the foot of Mount Fuji, near the site of the eponymous rock festival where they played. “That’s when the album began in earnest for me,” says James. “We’d pretty much discharged our touring obligations and subconsciously, it was like I was allowing myself to write again, because I knew I could go home and quickly get to work on it. So, actually, that song came remarkably quickly, and it cleared the path for the rest of the record.”

The confidence boost of getting such a key song in the bag filtered out not only to James and Thomas, but to rhythm guitar and keyboard player Adam Smith, who opened his songwriting account with the infernally catchy In My Pocket. “That was another one that appeared at the tail end of the last tour,” recalls James, “It was a song without a chorus and we put it through the Temples filter, which pretty much every song has to go through. One thing I love about our band is that you can’t always tell who wrote what, and that’s what a band should be, I think. It’s a lot easier to make stuff by yourself, what’s easiest isn’t always best. It can be a bit nerve-racking bringing your music to the band, but it also helps you to raise your game.”

If, as James contends, the process of making Volcano amounted to “hard work, with the inevitable moments of self-doubt”, the measure of its success is that you can’t hear the struggle or see the joins. Take, for example, the undulating lysergic dream-pop of Thomas’s Strange Or Forgotten – “a song about questioning your identity, in a world where everyone is trying to stand out in some way” – or the sun-dazed oscillations of Open Air which come hitched, incongruously, to a beat one might more readily expect to hear on an old Motown record. In fact, wherever you drop the needle, the melodies seem to come effortlessly – suggesting at times that Temples have located a bounty of low-hanging melodic fruit that has somehow eluded everyone else. Presented with a song like (I Want To Be Your) Mirror, other bands might have sliced it up for use in three or four separate songs, but Temples seem to know where to go when it’s time to restock. “I don’t think you can be too high-minded about it really,” says James. “We write songs, but what’s a song without a melody? It’s music, and it might be brilliant music, but I wouldn’t call it a song. And we’re in the business of writing the very best songs we can.”