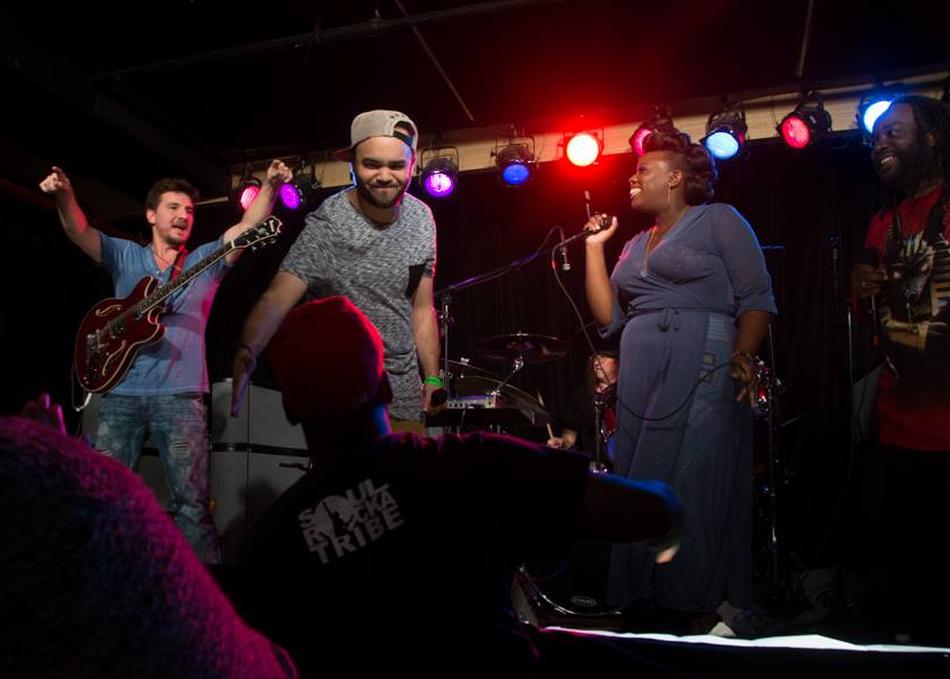 Uniting the traditions of The Roots, Rage Against The Machine and The Fugees into a fresh new sound know as “Soul Rock”, they deliver an intoxicating mix of powerful lyrics, raw beats and driven jams perfected over hundreds of live shows.

A staple of the New York City music scene, The Band Called FUSE has run three successful consecutive Kickstarters and is now poised to launch New York’s underground sound of Soul Rock worldwide with the upcoming release of the “Rise Together! Live!” concert movie and album. Filmed and recorded live over two nights at Littlefield in Brooklyn (official CMJ Festival showcases) by the Grammy-winning New York engineer and producer Steve Remote, the movie and album will showcase the band’s honed musical skills, charismatic stage presence and unique blend of original soul, hip hop and rock.

Backed with distorted guitars and thick drums, SK spits gems on some Rage Against the Machine-ish, if Rage were hardcore Hip-Hop heads. -2DopeBoyz

Genuine DIY scene-builders, The Band Called FUSE has earned a devoted fan base of thousands of Soul Rockas that revel in the diversity and sheer energy of the live shows. The band successfully crowdfunded a tour to South By SouthWest, the building of its own recording studio, and full financing for the upcoming “Rise Together! Live!” concert movie and album. The Band Called FUSE’s groundbreaking monthly residency in Manhattan, The Line Up, has showcased hundreds of up-and-coming MCs, singers, musicians and beat-makers. Now in its 7th consecutive year, The Line Up is a well-known destination for NYC acts as well as touring artists, and has been frequented by such notables as Ali Shaheed Muhammad (A Tribe Called Quest), Pharoahe Monch, John Forte (The Fugees) and Lil’ Fame(M.O.P.).

The Band Called FUSE has opened for top-tier acts such as Talib Kweli, Captain Kirk of The Roots and MURS, and landed several singles from two self-produced studio albums on the CMJ radio college charts.

"Rage Against The Machine Meets The Roots" -VentsMagazine