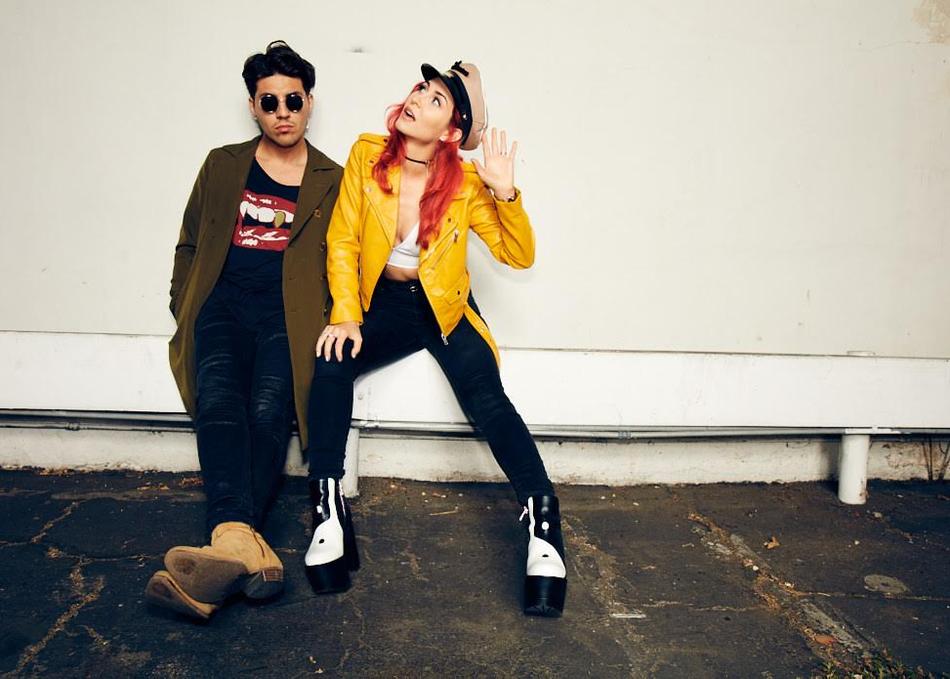 Here’s a partial list of things that have inspired L.A.-based alternative duo POWERS in recent months: found recordings of ancient Peruvian tribal music, a centuries-old Swedish hymn, a PBS retrospective on the making of Disney’s Snow White and the Seven Dwarfs, and a 1993 Baywatch episode titled “Island of Romance.” “Songs can spark from anything,” says Crista Ru, who co-founded POWERS with co-vocalist/multi-instrumentalist Mike Del Rio in 2014. “It’s just like love — it hits you out of nowhere, you can’t ever predict it. But when you feel it, you need to do whatever you can to hold onto that feeling and follow through and bring something good to life.”

For POWERS, bringing songs to life means tapping into their own eclectic backgrounds from playing in underground punk bands in New York City to co-writing for the likes of Kylie Minogue and Selena Gomez. Citing the cut-and-paste art of Robert Rauschenberg and Terry Gilliam among their longtime influences, they’ve taken a collage-like approach to constructing crystalline pop. Working to achieve this vision, POWERS has been praised by LA Weekly for creating a sound “as classic as it is cutting-edge,” matching their expansive musicality with genre-blurring ingenuity. As heard on their debut album Alpha, the result is an endlessly shapeshifting breed of pop that’s both intricately composed and graced with timeless simplicity.

In creating songs for their forthcoming album, POWERS continue to embrace their oddball inclinations and exercise their pop instincts while shaping a more lavishly arranged sound. Along with working from a musical palette now filled with world-music-inspired rhythms and tones and textures, the duo have achieved that bigger sound in part by building off their recent experiences touring with bands like DNCE and X Ambassadors. From the brilliantly warped vocals and gospel-like harmonies of “Sunshine”, to the late 70's New York bass line of "Heavy", and the life-affirming, anthemic gospel of “Real” (featuring Sam Harris of X Ambassadors), the new songs match POWERS’ natural magnetism with an arena-ready grandeur. “Whenever we have an idea, we always ask ourselves, ‘How would this feel for a live audience?’” Crista says. “If something feels really good to us and we’re excited and it’s all flowing, it usually translates that way to people’s ears and turns out to be something special.”

Partly recorded at the legendary Sunset Sound studios with mixer/producers Rich Costey (Vampire Weekend, Chvrches, Bastille) and Mark Rankin (Iggy Pop, Florence + the Machine, Santigold), Alpha is an emotionally ambitious look at "the process of growing up in your twenties.” According to Del Rio the album embodies, “those characters you meet and the characters you become, the left turns and right turns all while learning how to celebrate the full color spectrum of your individual story.” Lead single “Dance” is a gloriously bombastic and frenzied defiant anthem described by Crista as “our way of coping with the social and political environment of the world right now. It is our state of the union”. With “Man on the Moon” — a song about “the paradox of being simultaneously connected to everyone and everything via the internet, but still in complete solitude of real contact" as Del Rio explains — soulful grooves and spacey psychedelia both warp and heighten that sense of euphoric isolation. Meanwhile, on the disco tinged “Georgie,” POWERS animate classic lovesickness from a more carefree perspective. “‘Georgie’ is a fictional character inspired by real friends of ours going through the motions of love and rebound ,” says Crista. “The idea behind the song is to get out of your own way and enjoy life, know that something good can come from all the heartbreak even if it is just for one night”.

One of the most exhilarating moments on the album, complete with tribal stomps and a heavenly chorus, is its lead title track "Alpha". "I think the entire sentiment of our record is explained in the opening verse" says Del Rio. "It feels like the beginning of a journey for us.” On the other side of the album sits its closing track "Say Goodbye", which Crista explains "is the observation of life's dark comedy...death. In the wake of creating this record we lost so many people whose art helped shape our world , Bowie, Prince, Leonard Cohen etc. It seemed appropriate that our ode to their story closed out this body of work.”

On the precipice of releasing their debut full length, the two look back and remark that they really had no clear goal for their collaboration. “We were mostly just making music together because it felt good,” Crista says. Then in 2011, Del Rio moved to L.A. after teaming up with British producer Alex da Kid (Nicki Minaj, Dr. Dre, Imagine Dragons) and inking a publishing deal with his company KIDinaKORNER. A year later, Crista followed, and the two began penning songs for pop artists. After building up their songwriting resumé — which included landing