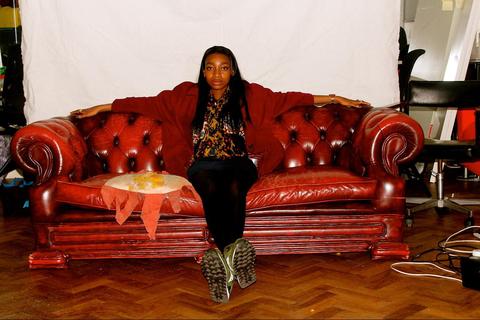 Born and raised in North London, at the tender age of 19 Little Simz brings a new level of intelligence, creativity and musicality to the British Hip Hop arena.

Primed for international success following a sizzling hot response to her recent Blank Canvas mixtape, some of the most influential entities in entertainment - from Zane Lowe to Sylvia Rhone - are already co-signing and predicting stratospheric levels of greatness for Little Simz in 2014.

By no means an overnight success, the rapper, songwriter, musician (she plays keys and guitar) and actress began her journey in Hip Hop at the age of nine; sharpening her skills at St Mary's Youth Club before winning local and national talent competitions. The passionate emcee went on to perform on the same bills as Tinie Tempah, Estelle and Leona Lewis before independently releasing her debut mixtape, STRATOSPHERE, at the age of 15.

Bigger stages soon followed for the young star-in-the-making, with performances at shows and festivals around the UK including the BBC Hackney Weekender, LOVEBOX, ILUVLIVE and even the House of Lords. Two further projects (2011's STRATOSPHERE 2 and 2013's XY.ZED) earned Little Simz the support of DJs on BBC 1XTRA and Kiss 100 as well as British online platforms Link Up TV, SBTV, GrimeDaily, RWD and MTV - before following up with her career-changing mixtape, BLANK CANVAS on September 26th.

"...an incredible body of work set to send shivers down your spine..." - SBTV

“We as individuals are basically blank canvases," Little Simz says of the mixtape's concept. "As we go through life, the experiences we have are like the paint and brush strokes that help to mold us and become the creation of our painting."

"Little Simz gets me excited about UK rap." -KarenCivil.com

Within 24 hours of the project's release, mixtape highlight "BAD (Lord Forgive Me)," produced by Balistiq (Tinie Tempah, Delilah), caught the attention of Zane Lowe - who instantly declared his love for the song and made it his #NEXTHYPE record on BBC Radio 1 - with i-D Magazine also making it their 'Song Of The Week'.

With tidal waves of major label interest sweeping in from both sides of the Atlantic (she was recently flown to New York to showcase for industry legends Sylvia Rhone and LA Reid), Little Simz is now back in the studio prepping her next project and debut album with some of the best musical talent from around the globe.
"[Little Simz is] the future of Hip Hop... She's got serious skills." - Sylvia Rhone

Stay locked to http://littlesimz.com for some exciting updates and keep both eyes and ears locked on Little Simz in 2014.

The show at Lustre Pearl on Thursday, March 13