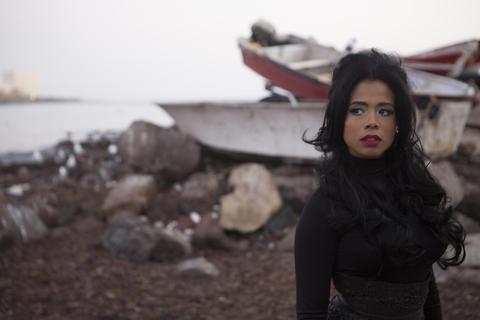 Kelis describes her sixth album as “a kind of unspoken lovefest”, albeit one involving two unlikely partners. On the one hand, there is Kelis Rogers, who first came to prominence singing the hook of Ol’ Dirty Bastard’s 1999 hit Got Your Money; whose debut album Kaleidoscope helped usher in the wave of sharp, thrillingly futuristic r’n’b that dominated the charts in the early Noughties: as exemplified by her global hit, 2003’s Milkshake; whose last album was a pop-dance extravaganza featuring production from will.i.am and David Guetta. On the other, there was Dave Sitek, guitarist in acclaimed Brooklyn experimentalists TV On The Radio; producer by appointment to a certain kind of smart, arty indie band: the Yeah Yeah Yeahs, Foals, Liars. “It’s like we’re such different people,” says Kelis, “but I met him and he’s really just this brilliant, strange creature. I musically fell in love with him and I think he’s just a divine person. It’s ridiculous how much we speak the same language, musically and food-wise.”

Ah, food. As you may have gathered from the title, and indeed the tracks Jerk Ribs, Friday Fish Fry, Biscuits N’ Gravy and Cobbler, food has quite a large role to play in Kelis’ sixth album, and indeed her life. She is a qualified chef, who took a cordon bleu course in 2008, after a traumatic battle with her then-record label came to an end: “I’d been trying to get off the label for four years. It was all-out war. I was in combat mode. I’d fought them for years, then one Friday I got this call telling me they were finally releasing me from my contract. I was sitting in my kitchen, watching TV, an ad came on for culinary school and I was like, “yeah, I’m going” I started class Monday morning. A year and a half course, seven hours a day, five days a week and Saturdays and Sundays you’ve got to get on the line, ready to be hired in a restaurant.”

Despite her reservations about having to wear “a stupid hat and chef’s getup”, she loved it. She’s about to launch her own range of sauces in the US called Feast – “at school I realized sauce is my thing, I personally think everything is better either smothered or poured” – and there’s talk of a TV cookery series, for which she’s just filmed a pilot episode: “a lifestyle show, it’s my life, and there really is no separation for me between the food and the music.”

You can tell as much from her hugely, infectiously enthusiastic descriptions of the session at which Food was recorded. “First of all, it was recorded at Dave’s house, which is like two minutes from my house in L.A.: ideal because we’re both borderline hermits, so that worked out really nice,” she laughs. “So I’d get there, and he’d be like, “oh, are you hungry?” And I’m like “yes, what do you have?” and I’d go and look in his kitchen. He used to start playing stuff, sitting at the piano, in the living room, right next to the kitchen, and I’d start singing a melody to it, while I’m chopping something. So then I’m frying something or whatever, and he’s playing another melody and I’m like “I love that”, so he says he’s going to call Todd. Todd’s this ridiculously good trumpet player who comes over and does this stupid freakin’ beautiful horn arrangement. And the next thing you know, I’m cooking pies and there’s all these random musicians arriving, and it’s very calm and chilled, food’s being put on the table in the living room, another guy’s got an idea for a melody and I’m like, “I love that, it makes me think of this” and by the end of the night, we’ve got 11, 12 musicians there and everybody’s stuffed and the music is blaring, the songs are playing, it’s like a freaking zoo in there because he’s got three dogs and two Bengal cats, but it’s also like a freakin’ commune, because he’s got these girls staying there who are in this band CSS, so they’re from Brazil and now they’re cooking, they’re mixing micheladas…” Her voice trails off, happily. “It’s was great. No ego. They guys from TV On The Radio are there, and they’re working with me, and everyone is like: “I know who I am, I know who you are, I’ll do what I do and you’ll do what you do and we’ll do something that knocks everybody out in here.” And in the midst of that, we’ll eat.” She chuckles. “Literally every day, that’s what it was.”

Between mouthfuls, they devised an album entirely unlike anything Kelis has released before: a quick spin of the Simon And Garfunkel-esque ballad Bless The Telephone will underline that. It mints a sound that’s rootsy without ever being self-consciously retro, that pitches live horns and gospel-y organ against electronics, that for all its classic soul and funk influences, couldn’t have been made any time but now. “The one thing we did say at the beginning of this record is that whatever we do, we’re not copy cats” says Kelis. “The music I listen to and love, I can’t duplicate it, I would never try. I don’t want to make a copy of an old-school record. It doesn’t make any sense. It almost comes off as disrespectful to think that I could actually recreate what was already created masterfully. That was never my goal. But what I will say is that thinking about moments of my life growing up, I think about what my parents listened to, what was just playing around the block, in my neighbourhood – half of it I don’t remember, but I remember the essence of it, the smile that it provides. Dave’s wonderful at grabbing a moment as opposed to trying to recreate something that doesn’t need to be recreated. That’s what we wanted to do. It’s not about, “let me duplicate this record”. It’s like, hell, we did something because it was authentic and it was beautiful and it’s rich and it’s flawed and I love it.”

In a way, it shouldn’t come as a surprise that Kelis’ music has taken another unpredictable shift: she hasn’t exactly shied away from pushing at the boundaries of the public’s perception of her from the start (“do I think that record labels in the past have had trouble knowing what to do with me and being unable to pigeonhole me?” she ponders, “um, in short: yes”). Her then-record label thought her second album, Wanderland, was too experimental and eclectic to release in America, while she’s probably the only artist in history to take a David Guetta pop-rave track and turn it into a paen to the joys of new motherhood: Acappella, a song about the birth of her son Knight in 2009. This time, the results aren’t just unexpected, but highly personal.

Food is about more than just Kelis’ culinary passion, it’s an album about life, relationships and the uncertainty of that – “sure I’m self-sufficient, blah blah, independent,” she sings on Floyd, “truthfully I’ve got some space I want that man to fill it” - and ridding yourself of the kind of anger and bitterness expressed on Change. “I didn’t plan on writing an album about putting my life back together. But I was more I think, just dealing with people rehashing things and bringing things up, dealing with stuff I forgot about, that was just not at the forefront of my mind. And so it does make you kind of think about it, and it does become a kind of strange therapy in a way. I think it’s just about where I’m at right now, and what’s going on around me and wanting to make a record that… that I believe. That I can sit down on a stool and sing for a long time.”

Understandably, she thinks she’s succeeded. “Being as arrogant as I can be, no one on Food is new to this, no one there gives a crap, everybody is literally like, “I do this because I’m good at it, I love it and it’s a blessing, and if I can do this with you, then bring it, let’s do it.” It’s like, OK, we’ve all had big budgets, we’ve all done big studios, that’s nice and whatever, but I’m also like, “I’m great, I don’t need any of that, I’ll go on my own schedule.” It would be a waste of energy throwing money at it, because everyone is there is so well-seasoned. There’s not a second of insecurity, not a second of doubt. The reality is that we’re too talented, too old and too good for any of that.” She hoots with laughter. “Like I said,” she smiles, “that’s putting it as arrogantly as I can.”

The show at Clive Bar on Thursday, March 13