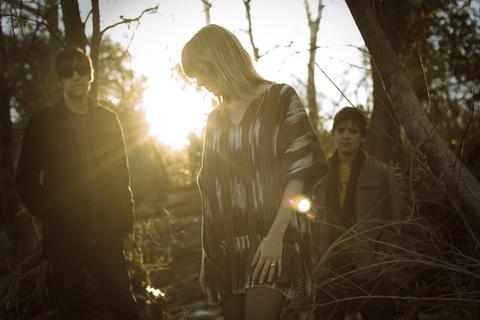 For Ume, music is the embodiment of contradiction. The Austin band’s powerful rock songs contain a multitude of opposing juxtapositions, balancing elegance with brutality, strength with fragility, ferocious metal and sweet melody. These paradoxes resound through the trio’s new album, Monuments, a collection of songs that reimagine heavy music and is as beautiful as it is massive. When the musicians began writing for the album, after touring over 200 dates in support of their acclaimed debut Phantoms, the emphasis was on translating the impassioned force of Ume’s momentous live show onto a recording. Rarely has the platform for women in rock been updated as authoritatively as it has been with this band and this new album.

“There’s always been a complete lack of inhibition in our live show,” Lauren says. “I don’t know if that’s necessarily been captured the same way on our recordings. So with this record we tried to embrace that sense of abandon and emotional catharsis in the studio as well. We didn’t hold anything back.”

Recorded with Grammy-winning producer Adam Kasper (Queens of the Stone Age, Cat Power, Foo Fighters, Nirvana) at Robert Lang Studios and Studio X in Seattle, WA, Monuments is Ume’s most colossal sounding recording yet. The recording process was about “just playing the songs and letting the sounds unfurl in an honest and true way,” Lauren says. For the band, the process was as much about self-understanding as it was about tangible creation.

“Adam gravitated toward a lot of my demos that I was unsure about and he helped me see myself as a songwriter for the first time,” Lauren says. “I felt we could take more risks, because we could be free from all preconceptions and ultimately focus on the songs. So one moment we’re drawing inspiration from a Dionne Warwick record I found at an estate sale, and on the next track I’m trying to channel my inner-Iommi.”

Monuments emphasizes the intense power for which Ume has earned live acclaim, but also urges stronger variety of sound and greater emotional range. The album equally contains the heaviest riffs the band has written and their most vulnerable sonic moments, connected by an overarching tone of honesty and freedom. From the first blast of the opening track “Black Stone,” there is no doubt this is a record driven by one of today’s most ascendant shredders, and one that is also not afraid to subvert rock conventions. Cohesive but unorthodox, the album deftly balances the propulsive, surging rock of songs like “Too Big World” and “Chase It Down” with the raw, acoustic introspection of “Barophobia” and “Within My Bones.” At the record’s emotional epicenter is “Gleam,” a dedication to Esme Barrera, one of Lauren’s fellow Girl’s Rock Camp volunteers who was murdered during the writing of the record.

“Monuments began as an attempt to deal with loss, yearning, and struggle,” Lauren says. “But it became a process through which I learned to really embrace this life, loved-ones and this chance to make music.”

Lauren and Eric began making music together after meeting at a skatepark in highschool. Shortly after forming Ume, Lauren moved on to attend graduate school in philosophy, but eventually traded in the PhD pursuit to follow her guitar heroine dreams. Driven by a desire to share how they felt as kids the first time they saw Fugazi, Lauren and Eric have logged tens of thousands of miles together on the road, moving from basements and dive bars to major festivals like Austin’s Fun Fun Fun Fest and Paris’ Rock En Seine.

Since welcoming new powerhouse drummer Rachel Fuhrer, the band has shared the stage with The Smashing Pumpkins, Warpaint, …And You Will Know Us By The Trail of Dead, Franz Ferdinand, Helmet, Wu-Tang, and Foals, and were personally called by Perry Farrell to open for Jane’s Addiction at their Lollapalooza afterparty. Ume appeared on the 2012 Season Premiere of No Reservations with Anthony Bourdain, who celebrated the band as “a shitload of rawk in a tiny little room” before taking them to dinner during SXSW. The band’s name – pronounced “ooo-may” – was taken from a Japanese plum blossom that they later learned symbolizes perseverance and devotion, a moniker that aptly reflects the musicians’ tenacity and passion.

“I’m a pretty stoic person, but when I heard this new record I actually cried,” Lauren says. “I think it expresses the story of what brought us here, and is in a lot of ways a celebration of not giving up. It sounds like who we really are.”