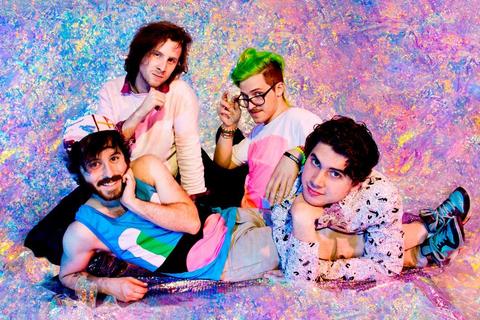 Anamanaguchi is a boy band made up of hackers and producers born & raised on the Internet, currently living in New York City. On May 14th, they released Endless Fantasy through their own brand new label, dream.hax – their ﬁrst album since soundtracking Scott Pilgrim vs. The World in 2010.

Anamanaguchi started in Pete Berkman’s basement in the suburbs of New York where Weezer, snacks and Super Nintendo lived in equal rotation. At 15, he began experimenting with creating punk music using an 8-bit NES. Following bass player James DeVito to NYU’s Music Technology program, Pete met Ary Warnaar who grew up in LA on raves, fashion and lazer tag. Ary began writing for the band, lending a more academic electronic-influence to Berkman’s capricious pop sensibilities. Later that year Luke joined as the band’s drummer via a MySpace message and then the band had fully formed.

Anamanaguchi is serious about being happy. They’re part of a wave of young Internet romantics, nostalgic for a future they know may never come, but can see the seeds of it in the beauty that surrounds them. They’re making emotional dance music for the video game generation and aren’t afraid to claim it. Anamanaguchi was born past cynicism & indifference; they’re in love with the universe and aim to celebrate magic-made-real with their music. The band is interested in breathing life into low-tech machines and making expressive, emotional melodies using the simplest, rawest electronic tones available.

Anamanaguchi is what the Teenage Mutant Ninja Turtles would’ve been if they were a boy band. Ary is cool but rude, Luke is a party dude, Pete leads, and James does machines (he’s responsible for all the DIY sound-and-light electronics the band uses).

Their new album Endless Fantasy is about reality and dreams, being young and searching for agency in an inﬁnite existence. Its 22 tracks explore dreamworlds of all kinds from polygon forests, to Tokyo drifting hills at 100mph, to the lifestream from Final Fantasy VII.

They teamed up with editors from Tim & Eric to make their first music video, “MEOW” – a fever dream version of “The Warriors” set in the perfect arcade. The video lives as a David Lynch by-way-of John Hughes ode to the victorious feeling of suburban escapism through friends and fun.