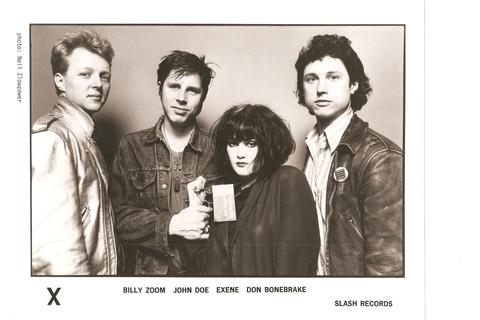 The fact is, no one sounds like X and no one ever will.

It’s not surprising when you consider the group’s unique beginnings, which can only be attributed to fate. On the same day with nearly the exact same wording, two want-ads appear in a local music rag. One was sent in by a guitarist named Billy Zoom, the other by bassist who called himself John Doe.

Zoom, a rockabilly rebel who’d performed with Gene Vincent, had read a negative review of a band called the Ramones. It said they only played three chords and they played ‘em too fast. So naturally, he went to see them. The show was at the Golden West Ballroom in the L.A. suburb of Norwalk in early ’77, and as soon as the Ramones started to perform, Zoom realized that, musically, he’d found exactly what he wanted to do with his life.

Doe, who was originally from the Baltimore area, was already down with the East Coast CBGB’s scene and by the time the two got in the same room together after responding to each other’s ads, it seemed it was meant to be. They performed a few shows with various drummers before a poet with no ambition of being a singer would enter the picture.

Doe found her in Venice Beach, at a poetry reading. He liked her poems so much he offered to perform them in his band. The poet, Exene Cervenka, had just moved to town from Florida and she told him, no offense, but if anyone was gonna perform her poems, it would be her, and she soon ended up in the band. Zoom was skeptical about someone’s girlfriend being in the band. After they did their first show with Exene, he didn’t know exactly what it was she had, but he knew it was magic.

After a succession of drummers, Doe was at the underground punk club the Masque in Hollywood one night, checking out a band called the Eyes, which featured a pre-Go-Go’s bass player named Charlotte Caffey. He called Zoom immediately and said he’d found their drummer. Doe told him he played with a parade snare and hit it hard as a hammer. Zoom told him to promise him anything. His name was D.J. Bonebrake and he quickly signed on. The band was now complete, and X would soon emerge from the young punk scene as one of its most successful offspring.

The band’s early albums, Los Angeles (1980), produced by Ray Manzarek of the Doors, Wild Gift (1981), and Under the Big Black Sun (1982) explored dark love and an even darker L.A. with the unflinching eye of a Raymond Chandler novel. Doe and Cervenka would marry and later divorce, but they’d always remain soulmates. As they released each ensuing album, More Fun in theNew World(1983) and Ain’t Love Grand (1985), the band continued to grow sonically and politically, fearlessly mixing genres without ever losing its center. As each member went on to explore diverse careers—careers that included acting, art, writing, producing and multiple side projects.”

[ In late 1997— The original members of X came together for the first time in 12 years for a record signing at Tower Records Hollywood. The amazing response from fans led to the band agreeing to play 2 shows -1 at the Trocadero in San Francisco and 1 at the Palladium in Hollywood in early 1998. Both shows quickly sold out & the Trocadero added a 2nd show. click the ad below for more on those shows. ]

“…the band began playing a series of shows, much to the delight of its hardcore fans.”

“… we asked each member to weigh in on the band’s past and present and to explain just how exactly they’ve managed to keep the fire inside.

Q. What can X fans expect on tour?

D.J. Bonebrake: All I can say is the band sounds better now than it did 30 years ago. We’re a tighter band, because of all our experience and we have a lot of energy. Exene’s a better singer than ever before and John sounds amazing. Billy’s in a really good place. Everyone’s in a positive mood, and you can hear it when we’re on stage.

John Doe: We certainly haven’t lost much, and it’s really inspiring to see an enthusiastic young audience. It has to do with being a part of something that’s real and not virtual. We feel like the last gunslingers.

Billy Zoom: We’re working up some more X songs that we haven’t played in years. The whole thing seems very energized, and I’m particularly excited because I’ll get a chance to play the new Gretsch Billy Zoom tribute model guitar.

Q. It’s amazing it’s been 34 years. So few bands perform with original members and so many people have been lost over the years. How has X managed to keep it together over three decades?

DJ: It really takes a financial incentive (he laughs). The truth is, it’s much more romantic when you die, but we’re the kind of people who just wanna hang out and make more music.

John: I think we managed over three decades the same way we managed over the first five years: Simply by determination, a certain amount of creativity and some ambition. There were many bands from (the Hollywood punk club) the Masque and from New York and England, and they’d go through the first wave of the first three years, and they’re not satisfied with what they got and they quit. We didn’t. A lot of it has to do with the people coming to see us.

Q. How have you maintained a love for the music?

John: It’s not something you really have to maintain. It just is, it exists. And once you begin playing it, you have to give it your all. I really thrive on performing. That’s why I play in three bands, and I’m working all the time. Singing is a good thing.

Billy: We have a very loyal fan base that loves our music. They help keep the passion alive.

Exene: You have to love the songs. I wouldn’t play it if I didn’t love it—the money’s not that good. X is the songs. John wrote a lot of the words and came up with the melodies. He’s a genius. They’re great songs. I love singing them every night.

DJ: The thing about being a musician is you need to keep yourself interested. I’m always practicing, playing multiple instruments and different styles, vibes, marimba, salsa bands, a Latin jazz band, a ‘30s band. When I go back and play with X, I hear things differently, and I think it’s made me a better musician.

Q. What’s the best part of hitting that stage with a band you must still love?

Billy: Meeting the audience. I think they put on a much better show than we do.

Exene: You don’t know what to expect at that moment. It’s always magic.

DJ: You look at the crowd and think, ‘Do they like us? Do they still care?’ I won’t lie and say I don’t care if there’s anyone out there. Luckily, there are usually people out there and I prepare for it, mentally and physically, like a marathon runner. People think punk rock is a simple music, but as far as I’m concerned, not everyone can do it. It’s hard to play it right. I put so much work into making it right. Sometimes an hour before, I wonder how the hell I’m gonna go out and do this crazy thing. It’s so surreal.

Q. Any secrets to a longterm career?

Billy: The secret to a longterm career is to never make enough to retire.

Q. When you guys set out in 1977, did you realize you were creating music that would stand the test of the time?

John: We knew we were part of something that was gonna have an impact, whether it was five years or twenty years, we didn’t know and we didn’t really care. When we started selling out shows at the Whisky, I knew we’d arrived at something. But you’re too busy just doing what you’re doing to think, ‘I’m hot shit.’ Maybe if you’re selling out arenas, you’re holding up your pants and going, ‘Holy fuck.’ But we were just hoping to get through the first six months.

Exene: We didn’t have any idea about the future. We were so in the moment, we didn’t think past 1980. I remember one night at the Masque, saying to myself at the age of 22… I just paused for a moment in the middle of my drinking and thought, ‘This is an amazing thing, you’re really lucky to be here right now.’ I realized in that moment how special it all was. It was hard because we were so successful in it. We were able to tour, it was mind blowing. Nobody was planning on a career. It was just a bunch of misfits who didn’t know what they were doing, playing music and inventing fashion. People would pull over on the side of the road and flip you off. You knew that it was important because people were fighting it.

Q. You really pushed the fashion of the scene. Where did you find your influences?

Exene: I just invented it when I was in Florida. I brought all this stuff with me from Florida, both physically and mentally, but no one beats me up for it anymore so it’s kind of weird.

Q. When you look back at old photos, what do you think?

Billy: I was so thin!

DJ: We were so young.

Exene: I can’t believe I thought I was so plain looking. We were lucky to be around so many good photographers.

Q. As you look back over three decades of X, is there anything you would’ve done differently?

John: I don’t know what we could’ve done differently… I think X was a classic not-ready-for-primetime. And the way we do it, the way we write songs, I don’t think we ever will be.

Exene: I would do everything differently. I wouldn’t have changed the scene I was in, but I would have done a better job and goofed off less, been more conscientious. Although, the truth is, I think it’s supposed to be a long strange trip or you’re doing something wrong.

The show at Mohawk Outdoor on Wednesday, March 12