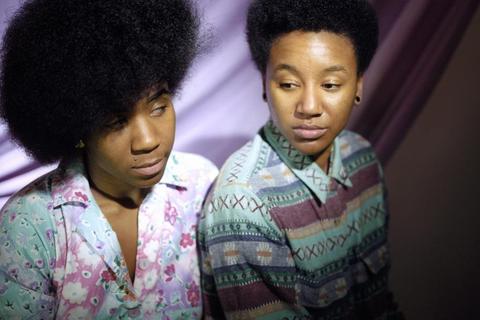 THEESatisfaction are Stasia Irons and Catherine Harris-White. Stas was born and raised in Tacoma, Cat in Seattle and Hawaii. The pair live/laugh/love/dance and create in Seattle, WA. They write, produce and perform their own material, funk-psychedelic feminista sci-fi epics with the warmth and depth of Black Jazz and Sunday morning soul, frosted with icy raps that evoke equal parts Elaine Brown, Ursula Rucker and Q-Tip. They met by what was clearly cosmic happenstance at the University of Washington and haven’t stopped the flow since.

There’s an album by ‘70s Blue Note flautist Bobbi Humphrey that’s suggestive of THEESatisfaction. The cover is black and white, Humphrey’s afro full and wide; next to her radiant smile a description is inscribed, a paraphrase of which might read:

THEESatisfaction. Where are they coming from? Where are they going to? If we’re straight on our priorities, you’ll be listening to their album while I tell you about some of the answers…

Further, they’re black purity. Hear that in their intonation. Without trickery. They know the gimmicks, scorn to use ‘em. Rather, they’ll face you and relate what’s in their hearts, faithfully and incorruptibly.

Immediately embraced for their singular sound, unflinching commentary, and immortal groove, Stas and Cat made friends, fans and family from coast to coast via their own immaculate grind; a combo of sharp digital hustle and self-booked, self-financed tours that connected them to like minds everywhere. Even crowds with nary a right foot between them find the steps when indoctrinated with THEESat’s unorthodox but right-on-time rhythms. Synchronized, sinewy and sensuous, the regal Stas and Cat channel the higher, whipping like waves of space-borne radiation onstage, leaving a trail of glowing observers abuzz like Geiger counters.

Like their comrades Shabazz Palaces (you may have heard these two on last year’s move Black Up), THEESatisfaction came upon the scene with lovingly handmade CDs of their self-released mixtapes, the first of which was 2008’s That’s Weird. All has been in preparation for the album they’ve envisioned for years, their debut full-length on Sub Pop Records, awE naturalE.

THEESatisfaction, the Queens Supreme. Bring yourself.