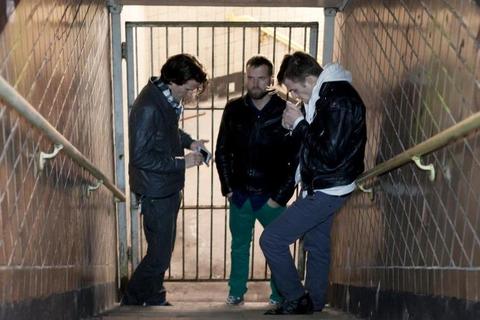 For rock and roll trio Highly Suspect, making and performing music isn’t a hobby, or even a profession. It’s a way of life. Founded by twins Rich and Ryan Meyer, and their best friend Johnny Stevens in 2009, this literal band of brothers started out playing cover sets on the shores of Cape Cod.
After realizing their own passion for song writing they relocated Brooklyn where they would record "The Worst Humans e.p." with producer Joel Hamilton (Elvis Costello, Plastic Ono Band, Black Keys/Wu-Tang Clan) Currently they still reside in Brooklyn and have recently released their second e.p. entitled "Black Ocean". Highly Suspect has played over 700 live shows in 5 years and have been steadily gaining a global audience with their DIY approach and hard work ethic. Their sound has been to compared to Queen's of the Stone Age, Band of Skulls, Pink Floyd, and early Kings of Leon however it has been well agreed upon by many that the sound is hard to target, as undertones of all genres of music can be heard throughout their set. In the single “Bath Salts”, The twins play off their primal connection to hold down a rocking, tension filled rhythm section, while lead singer Johnny’s dirty, lo-fi vocals play into the songs’ themes of recklessness and wasted youth. “We have been rogue, nomadic, bohemian, and poor for years now, but we stay together because this life and this music is what we love” says Johnny.
Known best for the passion and energy that resides within a live performance, it's fair to say you can't really comprehend the entirety of Highly Suspect until you have seen them play in person.