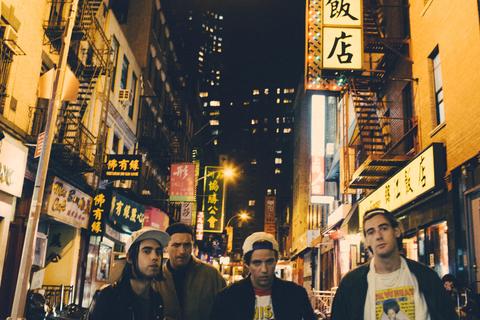 New York City quartet SKATERS' music, ethos, and attitude are remarkably entrenched in the late nights, eclectic characters, and punk roots of their hometown. That's why it's almost criminal that the group's birth can be traced to a crazy 24 hours in Los Angeles in the summer of 2011, when singer and songwriter Michael Ian Cummings met English guitarist Josh Hubbard at a party at a "really fancy-ass house," as Cummings recalls.

A few months later, the still band-less Cummings got a call from Hubbard announcing that he'd be arriving in NYC the following day from the U.K. Hubbard landed 24 hours later and crashed drummer Noah Rubin's birthday party. As Rubin and Hubbard got reacquainted, Rubin suggested Josh come to jam — and Hubbard flipped. "I'd just fucking flown 3,000 miles, I didn't want to fucking jam," he explains. He wanted a band. The Englishman threw down the gauntlet: He was in town for a month and a half and wanted the group to play a gig. So they hooked up with local bassist Dan Burke, booked three shows, learned the songs Cummings and Rubin had been tinkering with (and a handful of Pixies covers), and SKATERS arrived with a bang. Little did they realize at the time that all of these stories and more would find their way into the eleven songs that comprise their debut album, MANHATTAN, such a relatively short time later.

From the start, SKATERS had grand plans. "We were getting together every day and scheming," Cummings says. He and Rubin had grown up together outside Boston, where music had a massive presence in both of their homes. "There was always a turntable in the living room," Cummings explains, and after getting into Nirvana, Queen, and Led Zeppelin, he started to discover songwriters. Rubin's first drum set arrived on his fourth birthday, and his early fascinations were hardcore bands and avant garde jazz. Burke had older siblings who introduced him to "'70s and '80s R&B and the roots of hip-hop music" before he found heavy metal and punk rock. Across the Atlantic, Hubbard's dad gave him the Clash's London Calling for his fourteenth birthday, "and that just changed everything," he says.

While Hubbard was playing in the successful British band the Paddingtons, Cummings and Rubin were grinding away in the States in the Dead Trees, while Burke was lending a hand in a slew of NYC bands. After the Paddingtons dissolved, Hubbard played in Carl Barat's post-Libertines band, Dirty Pretty Things, then went through a rough patch ("I ended up going to Ibiza for four weeks and actually losing my mind") before returning to his favorite city to seize the opportunity to work with Cummings and Rubin. A week after he arrived, they wrapped recording on the Schemers EP, which they offered as a free download so people could get a taste of their bold, swaggering rock, which distills elements of the Clash, the Ramones, and the Strokes into their own unique sound. At the same time, they began to launch the full SKATERS project, including handmade ‘zines titled YONKS (future issues forthcoming), which helped unite the disparate artists they'd befriended.

"SKATERS was founded on late '70s New York punk and there was this community," Rubin explains. "We moved here excited for New York to be that place, and instead it was a very competitive and fragmented artistic environment." So they did their best to change it. The first YONKS release party was an epic gig at Manhattan's Studio at Webster Hall that attracted a massive crowd thanks to word-of-mouth buzz. Warner Bros. Records was in the audience and signed the band based on their tight show and the strength of Schemers. Warner Bros. then released a 7" single of a track from the EP — "I Wanna Dance (But I Don't Know How)" backed by "Armed" — which immediately blew up on blogs in the U.K. and New York (New York Times, Interview, Blackbook, Nylon, New York Magazine, to name a few).

When it came time to record their Warner Bros. debut, the band looked directly to its hometown for inspiration. MANHATTAN is more than an album — it's a statement of purpose and a portrait of life in New York City. "We were all bartenders, so the songs are tales of experiences we had or saw, and other people who were characters in our life during the first year we were in this band," Cummings says. (And for the record, SKATERS chose their band name because it captures their young and fearless attitude.

The album kicks off with subway noises, "Because that's the sound of our lives," Cummings says. The disc was even recorded by John Hill (Santigold, Wavves) in the API room at Greenwich Village's iconic Electric Lady Studios, named after its one-of-a-kind board, which Laura Nyro had custom-made to match the drapes in her NYC apartment.

The album’s first single, "Deadbolt," was written from the perspective of a man who started shooting at cops from a building right near Cummings' Chinatown apartment and subsequently became the subject of a manhunt: "I was thinking about how that guy would have felt,” he says. “He probably wanted to be forgiven at the very last moment." "Nice Hat" hearkens back to the night the crew ran into a musician they admired in a bar who got unnecessarily aggressive before Burke came to the rescue. "Dan smashed his hand down on the bar like Thor," Cummings recalls.

Cummings calls "Bandbreaker" and "Fear of the Knife" a departure from what people expect from the group. "They have a kind of reggae-rock vibe," Cummings says, adding, "We're hoping to explore that stuff more."

But the track that Rubin says "encapsulates the whole record" is the airy, tuneful "To Be Young in NYC," which isn't exactly a straight-forward anthem, but rather a cynical look at rich kids masquerading as broke. "Everyone's pretending that they're making it on their own," Cummings says. "That's a big part of living in New York City."

MANHATTAN features other little pieces of the city, too, in the form of sounds and conversations Hubbard nabbed on an old-school handheld tape recorder. "There's a cab ride in there, there's kids yelling in Brooklyn, girls talking in a café," Rubin says. "It's like a book of short stories," Cummings adds, deadpanning, "It's Salinger's Nine Stories but it's Eleven Stories by SKATERS. And the writing is much better."